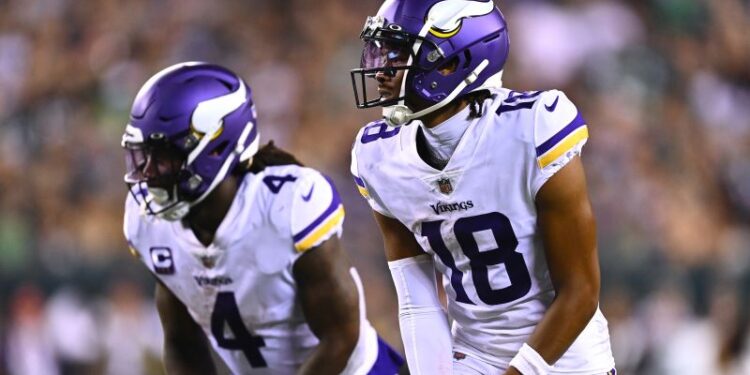 
The NFL returns to London on Sunday as the Minnesota Vikings (2-1) and New Orleans Saints (1-2) battle it out for the first of five international games scheduled this season.

With Justin Jefferson and the Vikings taking on Alvin Kamara and the Saints at Tottenham Hotspur Stadium, Sunday’s game will be the 100th game played outside of the US regular season and preseason.

After a week 3 win over the Detroit Lions, the Vikings are looking to relive the magic of the ‘Minneapolis Miracle’ – Stefon Diggs scored a remarkable 61-yard touchdown in an NFC Divisional semifinal four years ago – against a struggling Saints team, that will be without starting quarterback Jameis Winston and All-Pro wide receiver Michael Thomas.

This year, 10 teams will travel to three different countries, including Germany’s first-ever regular season game when Tom Brady and the Tampa Bay Buccaneers host the Seattle Seahawks in November at the Allianz Arena – home of Bundesliga football club Bayern Munich – .

During weeks 4 and 5, more than 200 players, coaches and executives will celebrate their heritage by wearing international flags on their helmets and clothing.

Players like Kyler Murray, the star of Arizona Cardinals, who will carry a flag of South Korea, and Detroit Lions wide receiver Amon-Ra St. Brown – the flag of Germany will be on his helmet – will take the global emphasize the NFL’s diversity within the league.

“My mother is from Germany, so with German grandparents who speak German, the heritage and culture has been a part of my entire life every summer,” said St. Brown.

‘I’m half German. It’s part of me. I love it. In my young career I was already amazed to see the influence my culture and heritage has had and I am delighted to see the German representation having an impact within our game.”

Brady and the Bucs (2-1) play against Patrick Mahomes and the Kansas City Chiefs (2-1) at the Raymond James Stadium on Sunday evening.

Earlier this week, the Bucs were forced to train at the Miami Dolphins team facility due to the impact of Hurricane Ian, which left the Tampa primetime game in limbo.

Despite the devastation caused by the hurricane, the team confirmed the game would go ahead as planned, with Brady highlighting how the game could serve as a moment for fans to come together.

“I’ve always felt that sport has brought people together over a long period of time,” Brady said during a regularly scheduled media session on Thursday.

Weather conditions aside, both teams will go into week 4 after their first losses of the season.

In a Super Bowl LV rematch, in which Brady won his seventh career championship, the two superstar quarterbacks will meet for the sixth time and the first since the title game.

Brady, who holds a 3-2 record over Mahomes, will go into Sunday’s game with the return of some much-needed offensive weapons – star-wide receiver Mike Evans is back from his one-game suspension for a scuffle with New Orleans Saints cornerback Marshon Lattimore.

However, receivers Chris Godwin and Julio, who have been out with hamstring and knee injuries since the season opening, are doubtful for the Bucs.

“Any time you get your starters back, you’ll be happy to have them back and have them healthy,” Bucs head coach Todd Bowles said on Friday of the opportunity to have the three wide receivers back on the field. “So we want to make sure they’re all healthy when they come back.”

Baltimore Ravens quarterback Lamar Jackson has started the season at a historic pace, with a total of 12 touchdowns in the first three weeks of the season, leading the team to a 2-1 record.

Jackson, who is in the final year of his contract, will lead the Ravens against fellow MVP candidate Josh Allen and the stalwart Buffalo Bills defense.

Both teams have suffered their only defeats this season in epic clashes against the resilient Miami Dolphins.

The 2018 NFL’s first-round selections were a big part of their team’s early success, as Allen comes out of a 400-plus-yard passing game against the Dolphins, and on nine passing touchdowns only Jackson leads the way. most this season.

Jackson and Allen are the only two players in the 103 year history of the NFL to achieve both nine touchdown passes and 100 rushing yards in the first three games of a season.

In recent years, the 49ers have been the Achilles heel of the Rams, as Los Angeles hasn’t won a win at Levi’s Stadium since 2018.

Notably before their win in the NFC Championship last season, the Rams had lost six games in a row to San Francisco.

After losing quarterback Trey Lance for the season to an ankle injury in Week 2, Jimmy Garoppolo and the 49ers will look to continue their recent success against the Rams to get off to a rough start to the season in which they take a 1-2 record in the highly competitive NFC West.

The match between NFC West’s rivals kicks off Monday at 8:15 p.m. ET on ESPN.