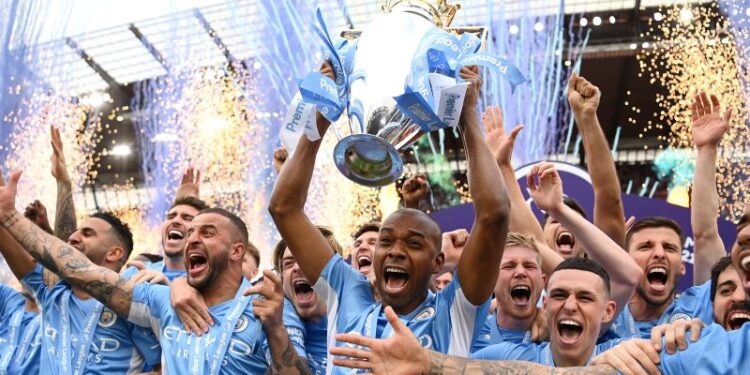 
If you’re going to win a league title, you might as well add a little drama.

Manchester City did just that by making a simply stunning comeback beating Aston Villa 3-2 to win the English Premier League on Sunday.

The host knew a win on the final day of the season would guarantee the title and, despite trailing 2-0, scored three goals in five minutes in the second half to send the Etihad Stadium into delirium.

Fans, many of whom had their heads in their hands for much of the game, rushed onto the field full-time to celebrate winning a title race like no other.

As players raced towards the tunnel, City supporters danced on the pitch and even broke one of the goals as a chilling rendition of the club’s famous anthem, Blue Moon, filled the air.

Ultimately, stewards led people off the field so City players could reappear and parade the trophy in front of an admiring, if not exhausted, crowd.

City’s Ukrainian defender Oleksandr Zinchenko was particularly emotional during the lap of honour. The 25-year-old was in tears as he wrapped the trophy in his country’s flag, paying tribute to those suffered by the war.

As the season drew to a close, City manager Pep Guardiola said that “the hardest serve in tennis is the one you have to serve to become champions.”

It was an analogy that couldn’t have been more fitting on a roller coaster afternoon in Manchester.

Goals from Matty Cash and former Liverpool star Philippe Coutinho appeared to have stolen the title from City’s grasp, but Guardiola has amassed a very special side.

While many teams may have succumbed to the pressure, City kept pushing and got the reward – with two goals from Ilkay Gundogan and Rodri securing a fourth league title in five years.

It is a feat made all the more impressive by the quality of Liverpool, who have battled with City all season. The victory over Wolves on Sunday turned out to be academic.

City’s victory comes a decade after Sergio Aguero opened the floodgates to a decade of success at Manchester City, scoring one last goal on the final day of the season to earn his side the league title.

And, minus a goal in the closing seconds, this title win was almost as dramatic, with supporters witnessing the whole spectrum of emotions.

There was a festive atmosphere, with DJs encouraging supporters to sing Oasis songs as they walked to their seats.

But once the match started, excitement turned to nerves as the home fans got excited every time Aston Villa enjoyed possession.

Fears eased temporarily as news of Liverpool’s deficit against Wolves reverberated on the ground, but grew again when City, most notably Gabriel Jesus, squandered some early chances and equalized Liverpool.

Frustration turned to anger as Villa went up two goals, leaving many to look to the sky in blue for some sort of intervention.

The title that so many had expected City to win slipped away.

But it’s not like this City side went down without a fight and took matters into their own hands.

Faith grew after Gundogan scored the first in the 76th minute and in an instant Rodri had equalized the score. With fans still celebrating, Gundogan struck again in the 81st to cap off one of the most chaotic passages in the game in Premier League history.

There was an added element of drama to Sunday’s game, with City’s opponents showing a certain loyalty to their title rivals.

Villa manager Steven Gerrard is a Liverpool legend, but failed to win the league title during his tenure at the club.

He came close, of course, but his infamous slip seven years ago contributed to his side knocking out the title that season.

Fast forward to now and the script was almost too perfect from a Liverpool point of view.

Knowing he had to get something out of the game to help his youth club overtake City, Gerrard walked along the sidelines of the Etihad like a double agent sent off from Anfield.

He barked instructions at ex-Liverpool player Coutinho, who wanted to investigate City’s defense and deliver a present to his former club.

Gerrard kicked every ball from the sidelines as his players dug resolutely against City’s mounting pressure.

In reality, no one can begrudge City the title.

While Liverpool produced a more rock and roll style of football, City blew teams over and over, displaying a consistency that deservedly crowned them champions of the league again.

Meanwhile, Tottenham Hotspur defeated Norwich City 5-0 at Carrow Road to secure fourth place and a place in next season’s Champions League tournament.
Burnley were relegated after losing 2-1 at home to Newcastle United.