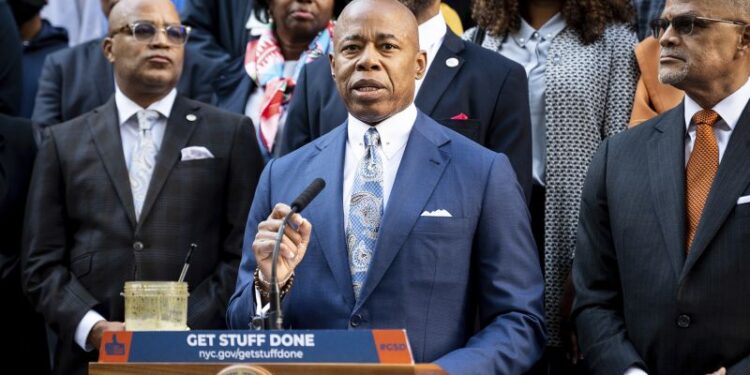 
Mayor Eric Adams has declared a state of emergency to help respond to the city’s migrant crisis, which he says will cost the city $1 billion Friday this fiscal year.

“We now have a situation where more people are arriving in New York City than we can accommodate immediately, including families with babies and young children,” Adams said. “Once the asylum seekers from today’s buses are accommodated, we would surpass the highest number of people in recorded history in our city’s reception system.”

The mayor called for federal and state aid to cope with the continued influx of asylum seekers.

Adams’ statement will direct all relevant city services to coordinate efforts to respond to the humanitarian crisis and to build the city’s humanitarian relief and relief centers. The state of emergency is in effect for 30 days and can be extended, the mayor said.

As of the first week of October, Texas has spent more than $18 million to transport migrants — who have been processed and released by immigration authorities in Texas border communities — to Washington DC, New York City and Chicago. Texas Governor Greg Abbott announced the program in April as part of his response to the Biden administration’s immigration policies, acknowledging that taxpayers would likely foot the bill.

New York City’s shelter system is operating at nearly 100% capacity, Adams said. The city expects to spend at least $1 billion by the end of the fiscal year to deal with the influx of migrants, the mayor said, adding that if asylum seekers continue to enter the city at the current rate, the total population within the reception system will rise above 100,000 next year.

Adams said 42 hotels have been set up as emergency shelters and 5,500 migrant children are enrolled in schools.

The city is also exploring a potential program for New Yorkers to volunteer to accommodate asylum seekers and the “displaced” in their homes.

“New Yorkers want to help, and we’re going to make it simple and easy for them to do that,” the mayor said.

Adams said in September that officials were assessing how they will respond to the influx of migrants, including legal options.

“As soon as we finalize how we will continue to fulfill our legal and moral obligation, we will announce it. Until then, we’ll just let people know what we’re thinking about and how we’re going to find creative ways to solve this man-made humanitarian crisis,” Adams said at an unrelated event.

A record number of migrants were transported by bus to the city on September 18 – nine in all, the highest number in one day in this recent wave, according to two city officials. According to a third city official, at least 1,011 asylum seekers arrived between September 16 and 18.

The city of El Paso transported 7,754 migrants to New York and 2,091 to Chicago in 207 charter buses from Aug. 23 to Oct. 6, said Mario D’Agostino, deputy manager of El Paso City. The migrants who were offered the city-funded buses had been processed by Border Patrol and released into the community.

Abbott and others who support increasing immigration restrictions argue that the Biden administration’s policies have pushed more people to illegally cross the border. Some Republican candidates have put forward the story of a migrant invasion as the midterm elections approach, promising they will do more to tackle illegal immigration.

The bus campaign has sparked sparring between Abbott and Adams, whose administration has accused the governor of using people as political pawns and whose town has long been considered a refuge for migrants. The mayor has asked the federal government for more resources, including housing assistance. The White House said it is in contact with Adams and committed to FEMA funding and other support.

Adams has said he spoke to the mayor of El Paso and told him that New York City cannot accommodate that many asylum seekers. He said the city has been in touch with Abbott’s office, adding that the Texas governor and his team were not open to communication.

Adams reiterated that New York City is still a haven, but stressed that it is unable to handle such an overwhelming influx of migrants.

“We’re not telling anyone that New York can accommodate any migrant in the city,” the mayor said Monday. “We don’t encourage people to send eight or nine buses a day. That’s not what we do. We say that as a refuge with the right to shelter, we will fulfill that obligation. That is what we are doing.”