Opinion: Garbage, blasted glass and the women who clean up political filth in Lebanon 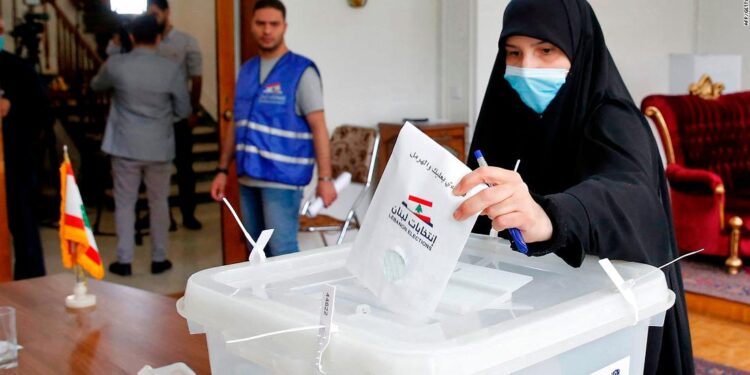 We are obsessed with cleaning our homes in Lebanon. I think it’s intergenerational, inherited from decades of war and conflict, and compounded by the fact that our country is so dirty. We live in one of the most polluted places in the region, with virtually no public facilities.
Not that our protests against the government’s failure to effectively dispose of waste collection have changed much – since then the waste has been piling up. Just this week, the UN Special Rapporteur on Extreme Poverty and Human Rights released a report essentially stating that the current misery in Lebanon was avoidable.
Lebanon is in the throes of one of the worst economic collapses of the century and is still reeling from the 2020 Beirut explosion, the world’s largest non-nuclear explosion. And this man-made disaster we find ourselves in, the UN report said, has “deep roots in a corrupt political system plagued by conflicts of interest”.

Now, just hours before Sunday’s parliamentary elections in Lebanon, voters are expected to cast their votes amid misery, threats and corruption. It is the first vote since the financial implosion and citizen protests of 2019, and the explosion in Beirut a year later, with newcomers hoping to break the long stranglehold of ruling sectarian politicians.

ADVERTISEMENT
On the eve of these elections, more women are participating than ever before – a 37% increase in the number of candidates compared to 2018. The last time Lebanon went to the polls, the representation of women in parliament also increased – from 3% to 5%.

But while the numbers seem to be moving in the right direction, they don’t really tell the full story.

Yes, there is a record number of women, but the ratio to men is sad. More women are confident enough to run for parliament. But more women are also migrating elsewhere. More women are unemployed. With Covid-19, domestic violence increased and women, especially migrant housekeepers who feel protected by the kafala system in captivity.
As women, we suffer most from an age-old patriarchal system. We are separated from each other because sectarian politics means that 15 different religious courts are allowed to rule over our bodies and lives. Even before the economy collapsed, women made up only 23% of the workforce.

The protests came as the country was at a political crossroads. Protesters protested corruption and demanded responsibility from politicians who had robbed us of basic services for three decades. We called for the right to be recognized as citizens – not subject to warlords who imprisoned us as women under religious laws.

The protests were also intersectional, in solidarity with underprivileged women, demanding implementation of Lebanon’s constitution, which had been trampled by the warlords.

Lebanese women have indeed taken the lead in any effort to review the policies and practices that discriminate against us.

We closed the university and joined our students – the streets became the classroom for weeks and months. Loyalists and ruffians from political parties beat us up and called us traitors, police forces fired bullets and arrested many of us.

But the protests created and revived hope. We held hands from north to south in a human chain, we cleared the streets, we resisted oppression, and we sang for unity.
In the last election in 2018, a woman running as an independent candidate won a seat in parliament. In her short two-year tenure, before resigning in protest at the explosion in Beirut, Paula Yacoubian worked on more bills than most men ever did in decades of sitting in parliament.

After the 2022 elections, new women will enter parliament and they too will be pioneers and leaders in legislation. But numbers can be misleading. If we only look at the number of women, we are a sign to be celebrated. The state also has its women and they are just as sectarian and patriarchal as the men.

I know this because I served on the National Commission for Lebanese Women for a year before resigning. The Commission had no interest or capacity to advocate for reforms to improve women’s lives beyond symbolic, and members were not at all interested in addressing the rights of non-nationals. (Lebanon is not a signatory to the 1951 Geneva Convention, yet has the highest number of refugees per capita in the world).

Women have been carrying the burden for too long and in solidarity with women from other parts of the Arab region. We are exhausted and in many areas it has gotten worse since we started. We cannot expect Lebanese women to break the cycles of corruption and patriarchy alone.

The women who lead civil society, political change, protests and campaigns for accountability need to be heard.

Take, for example, prominent human rights activist Wadad Halawani, who has campaigned for nearly four decades to find out what happened to her husband after he disappeared during Lebanon’s civil war (1975 to 1990) – one of an estimated 17,000.

Successive governments after the war promised her a fact-finding mission that has yet to see the light of day. Lebanon has not undergone a truth and reconciliation process after the war.

The warlords granted themselves amnesty and began to rule with impunity. This is a system built on exclusionary grounds: non-nationals have no rights, LGBTQ people are criminalized, women are subordinate citizens and civil marriage is not allowed.

With the country going to the polls, the conversation about women’s rights should never be about numbers. Numbers show us the few who succeeded and omit the majority who choke.

It is important that more women are formally represented. But without an inclusive and fair political system, the potential impact stops there: the number of women who have made it, the superstar pioneers who are resilient in the face of adversity, the fortunate, the highly educated and socially privileged, and those who give up so much of themselves. to live a life devoted to changing impossible structures.

We cannot celebrate those who have made it to the top without paving the way to the top and opening the system to all women. Our approach should be to take care of those who couldn’t make it, the women who died, the women who lost their homes, the non-gender conformers, the poor, the marginalized and the women who were forcibly displaced. †

These women were and remain the overwhelming majority in Lebanon, before and after these elections. It is to them that we must give our attention and make ourselves accountable to the men, the warlords, who have destroyed their lives.

Lebanon’s problems are serious, but not unique. Inclusion of women in public life and decent work are both prerequisites for freedom and well-being everywhere.