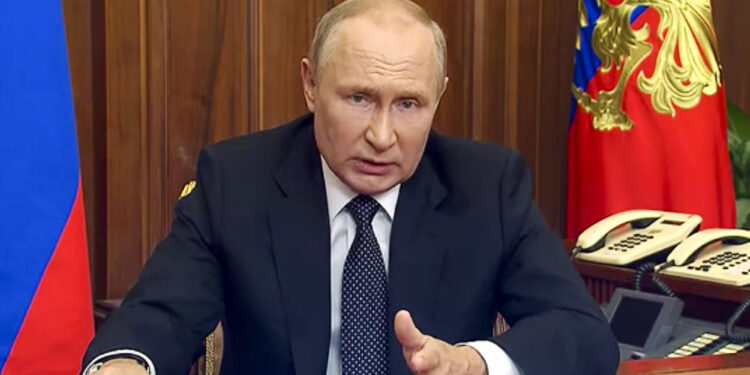 
Multiple Kremlin-backed authorities in eastern and southern Ukraine have announced Russia accession referendums to be held this week.

While previous plans for such a vote had been delayed, Tuesday saw a flurry of announcements from Russian-backed officials in occupied territories in Ukraine — all ready to vote September 23-27.

Kherson: The Russian-backed head of the Kherson government, Vladimir Saldo, said he has “signed a decree” for the referendum, which also includes the procedure for organizing the vote and “measures of administrative and criminal responsibility for violation of these rules.” ” are defined. Parts of Kherson are on the frontline between Ukrainian and Russian forces.

People’s Republic of Luhansk: The leader of the self-proclaimed Luhansk People’s Republic, Leonid Pasechnik, also signed a law on a referendum. According to the text, “The LPR’s Central Election Commission will determine the results of the referendum on the Republic’s accession to the LPR no later than five days after the last day of voting,” according to local media portal Lug-Info.

Donetsk People’s Republic: The self-proclaimed DPR agreed to hold a referendum and the head said he wrote a letter to Russian President Vladimir Putin asking him to quickly join the republic in the Russian Federation as soon as a referendum is held.

Zaporizhzhya: The so-called National Citizens’ Congress of the Zaporizhzhya region has approved a referendum, said Vladimir Rogov, a senior pro-Russian official in occupied Zaporizhzhya. “Technically we are ready. The security of the polling stations is guaranteed. Our borders are reliably protected by the Russian military,” said Yevgeniy Balitskiy, the Russian-appointed head of Zaporizhzhya’s regional administration.

Ukrainian response: Ukrainian officials condemned these announcements. The foreign ministry said the “fake plebiscites” will not change Ukraine’s “administrative-territorial structure and internationally recognized borders”. The ministry called the vote “forced citizenship” by residents and said it is “a new attempt by Russia to legitimize the consequences of its aggressive war against Ukraine”.

Russian response: The announcements have received rapid support from Russian politicians. Former Russian President Dmitry Medvedev has publicly expressed support for referendums in the self-proclaimed Donbas republics, saying it will have “enormous significance” for the “systemic protection” of residents. “No future leader of Russia, no official will be able to reverse these decisions,” he added.

US response: The Pentagon said the announcements are “just an information operation designed to distract from the predicament the Russian military is currently in.” US Ambassador to the UN Linda Thomas-Greenfield also condemned the actions on Tuesday.