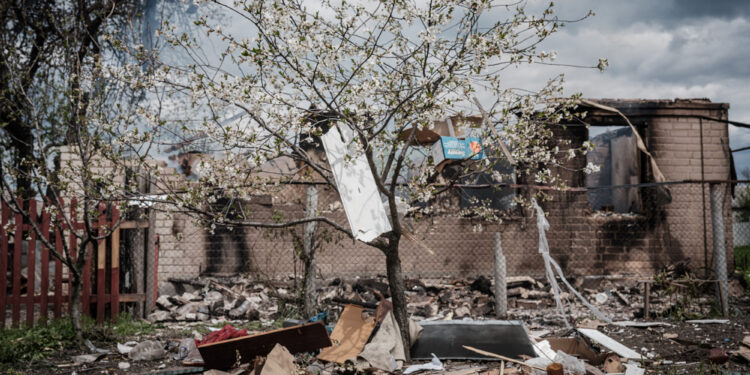 The Ukrainian presidential government on Wednesday reported “heavy fighting” around the industrial city of Severodonetsk in the eastern region of Luhansk, with a senior military official saying shelling had increased “exponentially”.

A statement on Wednesday from the presidential government reported “fierce fighting for Severodonetsk”, with constant mortar shelling, adding: “In the morning, with the support of artillery, the Russian occupiers are advancing towards Severodonetsk.”

According to the statement, six civilians were killed and eight injured in the intensified fighting in the region.

Serhiy Haidai, the head of the military administration of the Luhansk region, said shelling on Severodonetsk had “increased exponentially” in recent hours.

“Russian troops are very close; they can already fire mortars,” he said. “The fighting was on the outskirts of the city yesterday. [Russian] troops are transferred here from different regions – from Kharkov, Mariupol, even from Donetsk to penetrate into the Luhansk region at any cost.”

He added that “Next week is important; if they don’t succeed on Saturday or Sunday, they will run out of steam and at least the situation will stabilize for us.”

Elsewhere in Ukraine, the Russian military admitted on Wednesday that it had launched cruise missiles at targets in Dnipropetrovsk and Zaporizhzhya. A statement by Major General Igor Konashenkov, the spokesman for the Russian Defense Ministry, said the attacks on Zaporizhzhya targeted production workshops of the Motor Sich plant, an aerospace facility.

Ukrainian officials previously reported strikes in Zaporizhzhya and Dnipropetrovsk without providing extensive details about the targeted facilities. Officials in Zaporizhzhya then posted a video showing the damage to a shopping center.