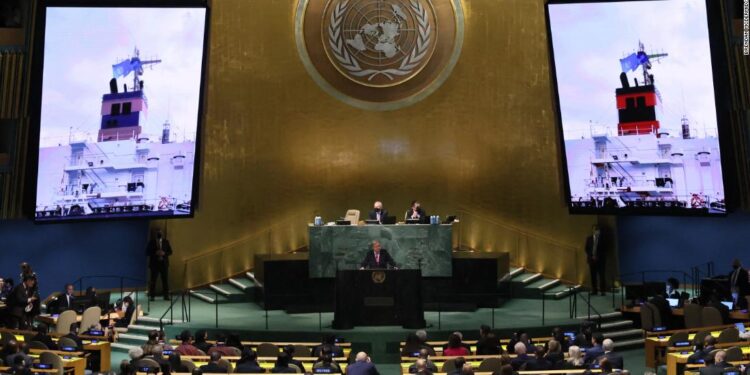 Maia Sandu, the president of Moldova, spoke directly to families in her country, thanking them for “opening their homes and hearts” to millions of Ukrainian refugees.

In remarks at the United Nations General Assembly in New York on Wednesday, Sandu said she represents a country that wants peace. She pointed out that Moldovan people speak a wide variety of languages ​​- including Ukrainian and Russian – but “regardless of our ethnicity” or political affiliations, “we all want peace”.

Sandu paid tribute to all Moldovan families who during the war “showed unprecedented solidarity with refugees by opening their homes and hearts to those in need”.

Moldova, which has about 2.6 million people, has hosted more than half a million refugees fleeing the war. At its peak, the Moldovan population grew by 4% as Ukrainians crossed the border, the Moldovan president said. Sandu said about 800,000 refugees chose to stay in the country.

“It is our moral duty as an international community to continue to support Ukraine,” the president said.

Sandu’s speech comes as Moldova was granted candidate status to the European Union in June. During her remarks, she said she was grateful for the support of member states and for the “recognition and vote of confidence in our love for freedom” and democracy.

“By applying to join the European Union, we want the world to know that we prefer democracy over autocracy, freedom over oppression, peace over war and prosperity over poverty,” Sandu said.