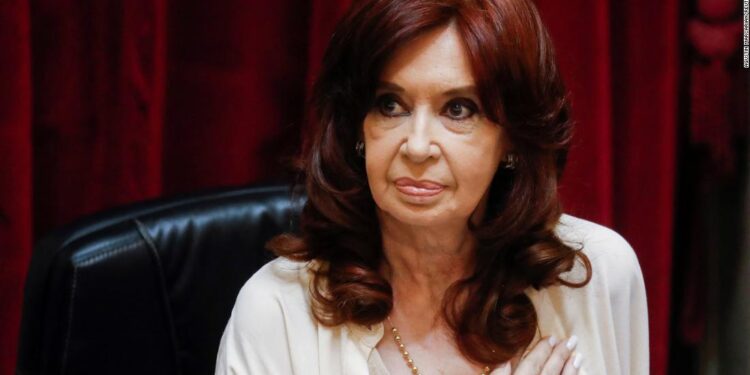 Video of the incident shows the vice president smiling as she walks past a crowd of people. A man in the crowd then rushes forward, pointing a gun at Fernández de Kirchner’s face and apparently trying to shoot. No bullets are fired and the two-time former president recoils unharmed.

The attacker was taken into custody after a few seconds of confusion and panic.

Argentina’s Ministry of Security confirmed that the weapon used in the incident was a .380 firearm with bullets in it.

In a televised address late Thursday, Argentina’s President Alberto Fernández said the suspect pointed a loaded pistol at Fernández de Kirchner, which failed to fire despite pulling the trigger.

“Cristina is alive because – for some reason we can’t technically confirm at this point – the weapon, which was armed with five bullets, did not fire even though the trigger was pulled,” he said.

He called the assassination attempt an attack on democracy and said: “We must eliminate hatred and violence from our media and our political discourse.” He declared Friday a national holiday for the country to come together in support of Fernández de Kirchner.

Former Argentine President Mauricio Macri also backed down from the attack on Thursday, calling for “immediate and in-depth clarification by the justice system and security forces”.

Fernández de Kirchner is one of Argentina’s most prominent political figures, serving as president from 2007 to 2015, before taking office as vice president in 2019.

Her supporters have been holding demonstrations outside her home for days in response to an ongoing trial in which she is accused of corruption during her term as president.

Earlier in August, federal prosecutors demanded Fernández de Kirchner to serve 12 years in prison. The court has yet to decide on the request.

Days later, her supporters clashed with police in the Argentine capital, with Télam reporting that police used batons and tear gas on protesters after a group of people broke down fences near her home.

During the national speech on Thursday, President Fernández said he had been in touch with the judge assigned to the case to act as quickly as possible.

Buenos Aires Province Governor Axel Kicillof called the attack “one of the worst episodes in our history” in a Twitter post following the incident.

“Those who push for prosecution, incite violence and even calls for the death penalty must stop now. You cannot continue to promote hatred and violence,” Kicillof said.

Pope Francis, who is Argentine, sent a telegram to Fernández de Kirchner to express his solidarity with her. “I pray that in beloved Argentina, social harmony and respect for democratic values ​​will always prevail against all forms of violence and aggression,” the Pope said.

The president also declared Friday a national holiday for Argentines to come together in support of Fernández de Kirchner.

Argentina has been ravaged by demonstrations this summer, with thousands taking to the streets to protest the government’s management of rising inflation and corruption allegations.

In 2016, a judge indicted Fernández de Kirchner along with 11 others for corruption, unauthorized association and aggravated fraudulent administration, freezing $643 million of her assets.

Fernández de Kirchner was charged with allegedly directing public road works for a company called Austral Constructions during her presidency. At the time, she had criticized the investigation as politically motivated.

At the same time, she was also on trial for another corruption case, in which she was accused of interfering in the sale of US dollars by the country’s central bank. The case was dropped in 2021, with the court ruling in favor of Fernández de Kirchner, according to DailyExpertNews en Español.