The attack on Crimea sparked a wave of attacks on Ukraine. But mystery swirls over who blew up Putin’s bridge | DailyExpertNews 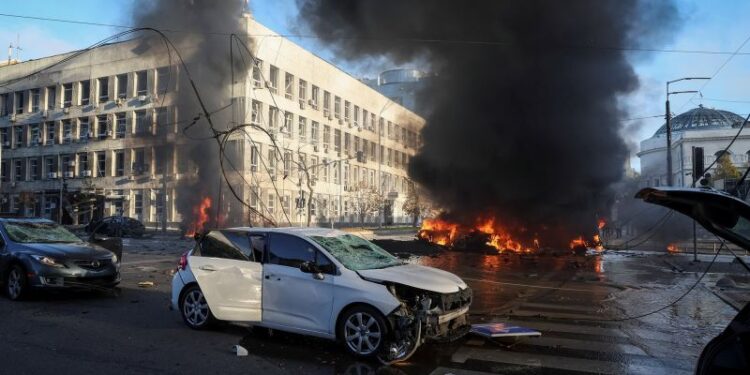 
The massive explosion on the Crimean Bridge shortly before dawn on Saturday severely hampered road and rail traffic along a major artery — both civilian and military — at a critical time in Russia’s campaign in Ukraine.

On the face of it, it was another disgrace – even a humiliation – for the Russian state, which is still reeling from the battlefield setbacks in Kharkov, Donetsk and, more recently, Kherson in the south.

But by Monday, the attack on the bridge had also become the Kremlin’s justification for a sudden series of rocket attacks in Ukraine. According to Ukrainian authorities, some 80 rockets and missiles had been fired at infrastructure in a dozen cities by noon — and Russian officials promised more would come.

In the hours after the bridge exploded, Russian investigators came up with one explanation for the blast: It was a terrorist attack involving a huge explosive charge hidden in a truck and detonated as the vehicle crossed the bridge towards Crimea.

Taking up the issue on Monday, Russian President Vladimir Putin said Kiev had “aligned itself with the most detestable terrorist groups”, leading to the subsequent “massive precision-guided weapon attack on Ukrainian infrastructure — energy infrastructure, military command and communication.”

“It is simply impossible to leave the crimes of the Kiev regime unanswered,” he said.

Putin continued: “As for the further act of terrorism on the territory of Russia, the Russian response will be harsh and correspond to the level of threat to the Russian Federation, I have no doubt about that.”

The explosion, the Moscow version of what happened and the lack of any Ukrainian recognition for its execution, has sparked a storm of theorizing as to what caused it and who was responsible.

The Kerch Bridge is about 240 miles from the nearest Ukrainian positions and well out of arms reach of the West. But Ukrainian drones are said to have approached the area over the summer and launched air defense measures.

Some analysts, unconvinced by the truck bomb story, suggested that a missile or missiles fired by drones could be responsible, or that an underwater sabotage team had fixed payloads on the bridge’s support structure.

Images and video of the scene were inconclusive. As the truck identified by the Russians crosses the bridge and begins to ascend to the highest point, it is engulfed by a massive explosion.

The Russian Commission of Inquiry, charged with determining the cause of the explosion, quickly identified the vehicle. Surveillance videos of the truck, with its distinctive scarlet cab, emerged at a checkpoint before driving onto the bridge. It gets a cursory inspection; the driver – in a short-sleeved shirt – is seen closing the back doors of the truck.

But it’s unclear how a truck bomb would have caused two separate spans of westbound lanes in Kerch Strait to collapse. In addition, the power of such a blast would usually have gone up and out. Some analysts note that the way the surges collapsed implies that the force of the blast came from below.

Chris Cobb-Smith, an analyst with the Forensic Architecture research group, is skeptical about the truck story. “It is possible to blow up a bridge by using explosives on the span, but it takes a huge amount and needs to be ‘pounded’ – a huge weight of ballast on the charge to ensure that the explosion goes down,” he told DailyExpertNews.

“I don’t believe a truck bomb could have caused so much damage. This would have resulted in a suicide bomber driver, unheard of in the context of this conflict.”

Cobb-Smith, a veteran of the British Army, is also skeptical about a special forces operation. “There are accurate weapon systems that can achieve the goal of destroying the bridge without endangering individuals.”

But he warns: “To fix this, I think we need an analysis of the parts of the bridge that are currently under water. I still think this would have been easily achieved with precision munitions.”

On Sunday, the head of the Russian Commission of Inquiry, Alexander Bastrykin, doubled down on the explanation about the truck.

Face to face with Putin in a well-choreographed exchange, Bastrykin said the truck had been in Bulgaria before traveling through Georgia, Armenia, North Ossetia and Russia. (It should also cross Turkey.)

“It was possible to identify suspects among those who could prepare a terrorist attack, and people operating on the territory of the Russian Federation,” Bastrykin said, referring to “citizens of other countries who helped prepare this terrorist attack.” .”

The investigators came to an “unambiguous conclusion: this is a terrorist attack prepared by the Ukrainian special services,” Bastrykin said.

A stern-looking Putin replied, “I understand.” In particular, the president continued: “There is no doubt that this is a terrorist attack aimed at destroying the critical civilian infrastructure of the Russian Federation”, carried out by Ukraine’s special services.

On the one hand, the story of the “act of terror” would at least excuse the Russian military from explaining why the multi-layered defenses around the bridge failed, despite Ukraine’s public claims that it was a legitimate target. On the other hand, it provides – through the Moscow prism – the justification for the massive escalation of attacks on Ukrainian infrastructure.

Ukrainian intelligence claims those attacks were planned days before the explosion in Kerch. Defense intelligence said on Monday that Russian military units “had received instructions from the Kremlin to prepare for massive missile strikes on Ukraine’s civilian infrastructure on October 2 and 3”.

If it wasn’t the truck, what could have caused such an explosion? Cobb-Smith says a surface craft of any kind should and should have been detected.

Some analysts have suggested the explosion could come from under the bridge; others think satellite images indicate the impact was from above and came from the north.

Ultimately, according to Cobb-Smith and other experts, there is not enough video evidence to confirm what happened in Kerch.

There is no doubt that the Ukrainians have seen Kerch as a legitimate, even necessary target.

In June, Dmytro Marchenko, a Ukrainian major general in the south of the country, said Kerch’s bridge was the “target number one”.

Marchenko told Radio Liberty: “This is no secret to their military or our military. Neither for their citizens, nor for our citizens. This will be the main target to hit. It’s as if the main gut tightening reserves just need to be cut off. Once this gut is cut off, they will panic.”

But Ukrainian officials have silenced Saturday’s explosion, welcoming the crippling of the bridge (somewhat premature given limited road and rail traffic within 24 hours) without acknowledging its involvement.

They took the same approach with the sinking of the Russian battleship Moskva. It took weeks before official recognition came.

Some Ukrainian officials attribute the explosion in Kerch to an internal power struggle between the Russian security service and the Defense Ministry, without providing any evidence.

Mykhailo Podolyak, an adviser to President Zelensky’s chief of staff, said on Saturday that “the logistics of the blast, the synchronization with the fuel echelon [the rail wagons carrying fuel]the volume of the destroyed road surface – all this clearly points to the Russian track.”

The cause of the Kerch explosion and the perpetrator remain open questions. Maybe they will for a while yet. But there is no doubt that the conflict in Ukraine has been taken to an even higher level as Russia has embarked on a relentless attack on Ukraine’s power and communications networks and Ukrainian officials vow revenge for every missile.