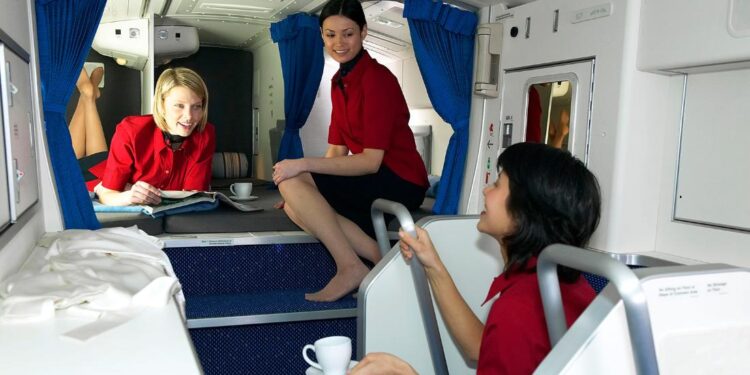 ADVERTISEMENT
Editor’s Note — Monthly Ticket is a DailyExpertNews Travel series that highlights some of the most fascinating topics in the world of travel. In June, we’ll take to the skies to check out the latest advances in aircraft interiors, including the people working to change the way we fly.

(DailyExpertNews) — There are some secret areas on widebody aircraft, where the pilots and cabin crew go to rest during long flights. Passengers cannot access them under any circumstances and they are well hidden from view.

They are called Crew Rest Compartments and their location on the plane varies.

On newer aircraft, such as the Boeing 787 or the Airbus A350, they are located above the main cabin, in the upper fuselage. But on older aircraft, they can also be in the cargo hold or simply in the main cabin.

They come in pairs: one for the pilots, which usually sits above the cockpit and often has two bunks and an armchair, and another for the cabin crew, usually with six bunks or more and placed above the aft galley, the section at the back of the the aircraft where food and drinks are prepared and stored.

Airlines have a say in the configuration of crew rest areas when purchasing an aircraft, but key parameters are set by regulators such as the Federal Aviation Administration. For example, it mandates that crew rest areas “should be in a location where disturbing noises, odors and vibrations have a minimal effect on sleep”, and that they must be temperature controlled and allow the crew to adjust lighting. .

The bunk beds (“or other surface that allows for a flat sleeping position”) must be 78 by 30 inches (198 by 76 centimeters) in size – tall people beware – and have at least 35 cubic feet, or one cubic meter, of space to them. There should also be a common area for changing, entering and exiting with at least 65 cubic feet of space.

The crew rest area on a Boeing 777 passenger plane.

The end result is somewhat akin to a Japanese capsule hotel: a windowless, cramped, but cozy sleeping area, with power outlets and a lamp — as well as all the required safety equipment like oxygen masks, seat belt lights, and an intercom, among other things.

“They can be quite comfortable,” said Susannah Carr, a United Airlines flight attendant who works on Boeing aircraft, including the 787, 777 and 767.

“They have a padded mattress, a vent to keep air circulation and temperature control so you can keep it cooler or warmer, and we have linens, mostly similar to the bedding used in business class on our international flights. They’re nice — but I’m also only about six feet, so if you put a six-foot person in there, they might be a little tight,” she says.

But are they better than a corporate or even premium chair?

“In some ways yes, in some ways no,” Carr says. “The bunks can be wider than first class and for me personally, depending on the aircraft, I get more legroom. But it’s a bunk, so you don’t necessarily have the full headroom of in the cabin and of course you don’t” I don’t have the privacy either. And if you’re claustrophobic, you definitely feel that in there — it’s an airplane, so you only have so much room to put things. They definitely take advantage of every inch up there.”

The rest area for the pilots is close to the cockpit.

The crew rest areas are designed so they don’t draw too much attention from passengers, no matter where they are: “A passenger passing by would probably think it’s a closet,” Carr says.

“I won’t go into too much detail about how we access it — it’s safe, I’ll say. Every once in a while we have people who think it’s a bathroom door and they try to open it, but we just point them out.” the way to the actual bathroom door.” toilet instead.”

Behind the door is usually a small landing and ladder leading up, at least on the newest plane.

“The bunks are open on the side or on one side, so you can crawl in — I sometimes jokingly call them ‘the catacombs,’” Carr says.

“They are very heavy curtains, they block out light and a good amount of sound, but not if you have an energetic crowd on the plane or an upset child. We’ve had passengers open the curtains looking for something or thinking they would go to the galley, so it’s not necessarily the best rest.”

Unsurprisingly, most flight attendants prefer the bunk beds over the curtained seats, but the upgrade also benefits airlines, who don’t have to give up precious cabin space that can be used for passenger seats instead.

A split image of a Finnair A350 cabin crew rest area. To the right is the entrance, which is accessed from the forward galley.

Cabin crew on long-haul flights typically spend at least 10% of their scheduled flight time in the rest areas.

“On average, I’d say that’s about 1.5 hours per long-haul flight,” said Karoliina Åman, a flight attendant at Finnair who works on Airbus A330 and A350 aircraft. However, this can vary depending on the airline and the flight time – the rest time can be up to several hours.

“Since we don’t have a private space on the plane for our lunch or coffee breaks, this rest period is extremely important and helpful to us,” she says.

“This is the moment during the flight when we don’t answer the calls of passengers or do any task other than rest, and rest our feet and mind as well. The purpose of this rest is to stay alert and ready throughout the flight, so that if something unexpected happens, we’re ready to take action.”

However, not everyone sleeps in the bunk bed once in a while.

“Usually on an outbound flight from Helsinki I use my rest to listen to an audiobook or read a book, as I come from home and am well rested. But on an inbound flight from the destination to Helsinki, there can be sleepless nights behind you — for example, I don’t sleep well in Asia — and then you usually fall asleep during the rest. Waking up from that sleep can sometimes be a really rough experience when your brain has switched to night sleep mode,” says Åman.

To reach the rest area on this A330 SAS aircraft, the cabin crew goes down a small flight of stairs.

“Jet lag can be a tricky beast,” Carr says, “Sometimes I can unwind and sleep, other times my body just isn’t ready for a nap. But since we’re on a break, we’re allowed to use our phones so we can take a nap. could watch a movie on it or read a book.”

The rest areas are closed during taxiing, take-off and landing, and they are used on a shift overseen by the cabin manager – or chief purser, in aviation parlance – the cabin crew member who is in charge of everyone else and oversees operations on board .

This person is usually allowed to use a special bed located at the entrance to the rest areas and with access to an intercom, to communicate with the pilots and the rest of the crew.

“Everything in our industry is based on seniority, from the schedule you fly, to the routes you can hold, to your days off,” explains Carr. “The longer you are there the better the benefits and one of those benefits is choosing your crew break time – we go by seniority order so the person with the oldest on the flight can choose whether he or she prefers the first break or the second break, and then you go through the list until everyone has breaks.”

The rest area for the pilots, which is separate from that for the cabin crew, is located close to the cockpit. Depending on the duration of the flight, there can be up to four pilots on board, but there will always be two in the cockpit; therefore, the pilots’ rest area only has two bunk beds (or even just one on older planes), but it includes a seat sometimes equipped with in-flight entertainment, which the cabin crew don’t get. Other than that, the compartments are quite similar.

Kuosmanen flies on A330 and A350 aircraft and says he prefers the latter’s rest area, which is over the forward galley rather than in the main cabin. “It’s got really good curtains, you can regulate the temperature really well, there’s great ventilation and it’s more soundproof. You don’t hear anything going on in the galleys, it’s really quiet and comfortable.”

On this Boeing 787 Dreamliner, the rest area for the crew members is located at the rear of the aircraft.

The next time you’re on a long-haul flight, you might want to keep your eyes peeled for a nondescript door at the front or back of the plane — if you see a pilot or flight attendant disappear into it, you might have spotted a resting place.

But keep in mind that crew members aren’t necessarily happy to show you around, as passenger access to the rest areas is prohibited: “It’s a bit like Disney — we keep the magic behind closed doors,” Carr says.

“You don’t necessarily want to know that your flight attendants are getting a little quiet, but at the same time you’ll be happy when we show up after our little cat nap, all fresh as a daisy.”