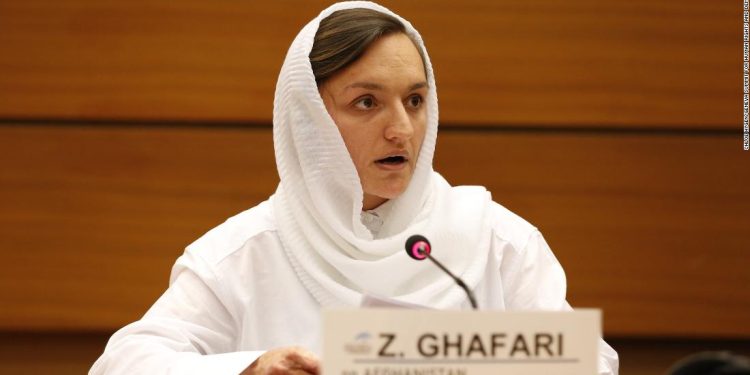 In 2018, at the tender age of 24 (although she admits she pretended to be two years older to qualify), Ghafari was appointed as one of the few female mayors in Afghanistan. After protests from the local population in the conservative city of Maidan Shahr, she then had to fight for months to actually hold the position.

Ghafari was finally able to go to work in November 2019, almost a year after her appointment, but soon, as she tells DailyExpertNews, she would have to endure constant harassment, intimidation and regular protests: crowds of angry men demonstrating outside her office, holding sticks and throw stones.

She remembers entering her office and everyone else walking out, as well as the occasions when she arrived at her office to a locked door, where she had to break the lock to get in.

But the young Afghan official kept showing up and was mayor for two and a half years.

“I was like, ‘I’m going to show you people because whatever I have in my head, it’s just like you'”.

And Ghafari would succeed in changing the attitude of some people. She says one of her fiercest critics told her years later that she had proved him wrong when he told her she was nothing more than a little girl.

“I was able to show the strength and ability of women and prove that we can do anything. I’ve shown people that no matter how many times I’m still attacked, I’ll still be here because I think what I’m doing is right,” she says.

But this was all before America withdrew its troops from Afghanistan last year and before the Taliban took control of the country. Initially, Ghafari had wanted to stay, but the situation on the ground kept getting worse, she says. Her father was murdered in 2020 and she believed her own life was also at stake.

The final straw came in the summer of 2021 after she said gunmen came to her home and brutally beat up her guard. Having survived multiple Taliban assassination attempts, she knew that leaving Afghanistan was the only way to protect the rest of her family, so she fled the country in August 2021 by hiding in the footwell of a car.

“I believe we should build, not break, the bridge between the people of Afghanistan and the world.”

Now living in Germany, Ghafari continues to raise her voice for the people of her homeland, using her radio station and humanitarian foundation — the Afghan Women’s Organization Assistance and Promotion — advocating for women’s rights.

“I have no illusions about the Taliban, but I am also aware that they will now be in power in Afghanistan for years to come. The media has mainly focused on the Taliban and how they will rule, but I am interested in the people and I believe we should build, not break, the bridge between the people of Afghanistan and the world,” she says.

In February, Ghafari made his first return to Kabul and said he was shocked to see how quickly conditions there and in nearby provinces had deteriorated.

“We have always had shocking poverty in Afghanistan, but now even those who belonged to the middle class struggle to survive. State employees have not received a salary for months. As I drove through Kabul I saw people standing by the side of the road and their selling household belongings,” she says.

The month before, United Nations Secretary-General António Guterres highlighted the “scale of despair” when the UN made its largest-ever humanitarian appeal for a single country, warning that “virtually every man, woman and child in Afghanistan face acute poverty.”
Ghafari says her heart broke when the Taliban reneged on their long-awaited pledge to send girls above the sixth grade back to school in March. In response, her organization is building a center in Kabul to provide women’s basic tailoring, crafts and secondary education, as well as maternity care and general health care.

She hopes to expand to other parts of the country in the coming months.

But Ghafari knows that her efforts alone are not enough. This week, when she accepted the Geneva Summit for Human Rights and Democracy’s 2022 International Women’s Rights Award, she urged the world to act.

“I urge you to do everything possible to get our people out of this predicament and to raise your voice in support of humanity. The solution is not for everyone to just sit and send statements. We have action needed at least after seven months of darkness for the men and women of my country,” she said in her acceptance speech at the UN.

“My country has been at war for 40 years. Achieving peace in a country that has been at war for decades is never easy. It often involves making unsavory choices and talking to people you find abhorrent. And yet it can be no different. is how peace was achieved in Northern Ireland and in Yugoslavia, and I believe this is the only way it can be achieved in Afghanistan,” she continued.

In addition to prioritizing human and women’s rights in international talks with the Taliban, she asked world leaders not to close their doors to Afghans seeking safe shelter. Referring to the welcome many European countries offer to those fleeing the war in Ukraine, Ghafari added: “Our blood is no different in color from Ukrainians”.

From femicide to Islamophobia and wage inequality, feminists are calling on the next French president to invest in structural reforms that will benefit all women.

What is at stake for women in the French elections

Written by Adie Vanessa Offiong
While France proclaims its blindness to race, Rokhaya Diallo (1978) makes sure that the blatant existence of racial inequalities is known. In 2007, she founded Les Indivisibles, an anti-racism organization that uses humor and irony to combat racial discrimination.
The French journalist, writer and activist is a driving force behind minority rights and racial, gender and religious equality.
Born of Muslim Senegalese and Gambian parents, Diallo grew up in La Courneuve, a diverse French suburb, where her color was never questioned. She became involved in local politics, chaired the Youth Council of La Courneuve and became actively involved in the anti-sexist organization Mix-Cité.
The ‘where are you really from? The question started when she started working in Paris, the moment Diallo realized that people saw her differently.
Today, Diallo promotes equality and pluralism — a political philosophy that recognizes diversity — through advocacy campaigns that promote racial and gender justice.
In her 2020 documentary Acting while Black: Blackness on French Screens and her book Don’t mansplain me! (2020), reveals how male patterns make women invisible in society. She is also the author of Racism: The Guide (2011) and France Belongs to Us (2012).
Diallo was ranked among the 28 most powerful people in Europe in 2021 and is also on Britain’s Powerful Media list among the 30 best black personalities in Europe. Her fight against racism earned her the prize for the fight against racism and discrimination in 2012.
Diallo holds degrees in law and audiovisual marketing and sales and is currently a Researcher in Residence with the Georgetown University Gender+ Justice Initiative program.