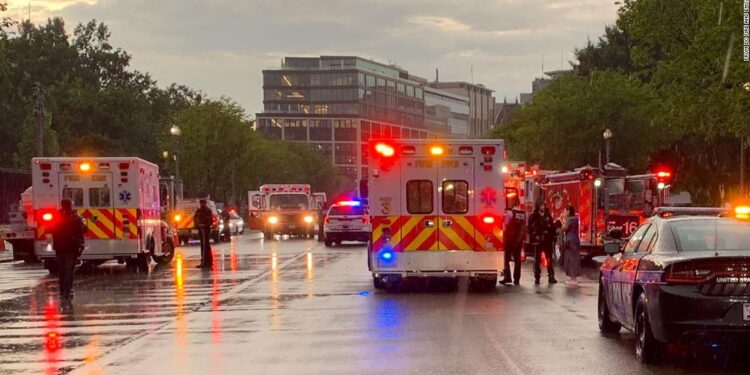 James Mueller, 76, and Donna Mueller, 75, died of injuries after the lightning strike in Lafayette Park near the White House Thursday night, a DC Metropolitan Police spokesman confirmed. The couple was visiting from Wisconsin. A 29-year-old man died of his injuries Friday afternoon, police said. His name is withheld pending family notice.

The condition of the other injured person is unknown.

The victims drove through the storm under a tree, a law enforcement source said. The thunderstorm hit the DC area around 7 p.m. ET.

“We are saddened by the tragic loss of life following the lightning strike in Lafayette Park,” White House press secretary Karine Jean-Pierre said in a statement Friday. “Our hearts are with the families who have lost loved ones and we pray for those who are still fighting for their lives.”

According to John Jensenius, an expert with the National Lightning Safety Council, the three deaths were the 10th, 11th and 12th killed by lightning in the United States so far this year.

The U.S. averages 16 lightning deaths a year through Aug. 4 based on data from the past 10 years, Jensenius said Friday night. He also noted that this week’s fatalities were the first in Washington since May 17, 1991, when one was killed and 10 others injured when lightning struck a tree during a lacrosse game.

“This incident underscores the need for people to move to a safe place when there is a thunderstorm in the area. Even a distant clap of thunder should serve as a warning to immediately enter any substantial building or hard-topped metal,” Jensenius wrote. . “The incident also underscores the danger of taking shelter under a tree, as footage from the scene shows victims near a tall tree. Lightning tends to strike the tallest object in close proximity, which is often a tree.”

Noah Gray and Rachel Janfaza of DailyExpertNews contributed to this report.