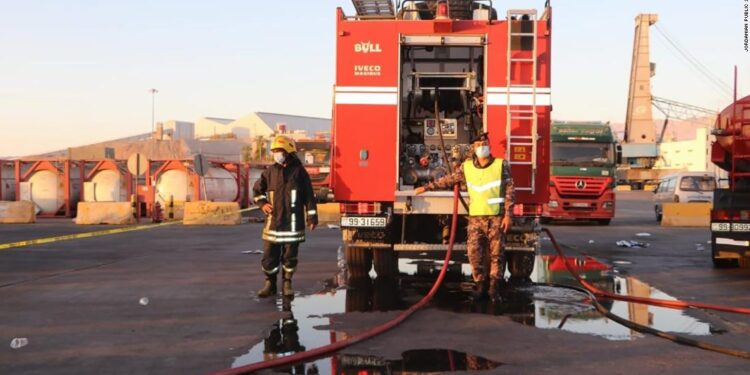 A video from a nearby CCTV camera released by state-owned Al Mamlaka TV showed the container being transported by a crane before falling, releasing a cloud of yellow, gaseous material onto a ship and into the harbor. The video shows people running away after the container fell.

Local scenes broadcast on Jordanian state television showed teams in hazmat suits at the scene of the incident.

Eight of the deceased were Jordanians, according to the government. The other victims are of different nationalities, it said.

Nearby hospitals treating people injured after the incident were reaching full capacity, according to Jordanian state television, citing the head of Aqaba’s health directorate, Jamal Obeidat.

Obeidat said field hospitals would be deployed and ordered residents of Aqaba to close their windows and stay indoors, Mamlaka TV said.

Air evacuation aircraft were also dispatched to assist with evacuations.

Aqaba is a popular tourist town, located on the Red Sea. The incident has alarmed many tourists, but tourism commissioner Nidal Al Magali said in a statement that the impact of the gas dispersion was currently limited due to slow winds.