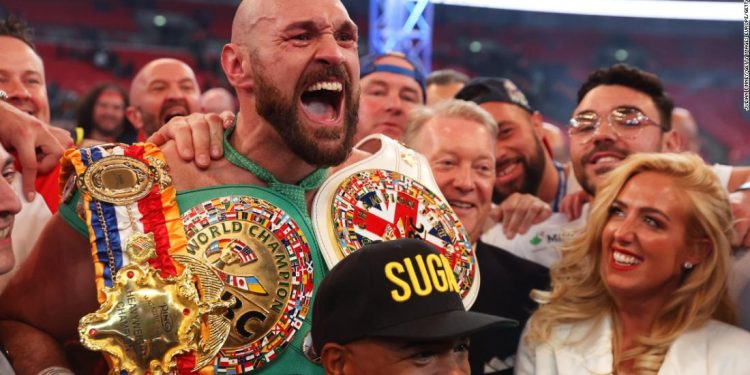 It was a true boxing masterclass from Fury, further cementing his place at the top of this generation’s heavyweight division.

Whyte came into the fray with serious ambitions to take the WBC belt from Fury but was outmatched and outclassed from the opening bell in what was one of the most highly anticipated heavyweight fights in recent memory.

The 94,000 tickets sold out in just hours, setting a record for the highest attendance at a boxing match in Europe and the largest worldwide of the 21st century.

Wembley Stadium was more than three-quarters full, two hours before Fury and Whyte would even make their ring walk – perhaps unsurprising given that some fans had paid around £2,000 ($2570) for the more premium seats.

With both fighters hailing from the UK – Fury from Manchester and Whyte from London – they were each treated to a boisterous reception when they first appeared on the big screens, with Fury narrowly beating Whyte on the decibel meter.

Thanks to his larger-than-life character and incredible technical prowess, Fury has a unique appeal and is extremely popular among British boxing fans, but Whyte’s perseverance and determination during what has at times been a roller coaster career has also endeared him immensely to the public.

This shot at the WBC heavyweight title was highly anticipated and many felt it was far too late.

The build-up to the fight had been unusually amicable by the standards of the heavyweight division, with both men clearly showing great respect for each other.

The pair shared some comedic moments during the fight week, most notably when they competed in a dance-off during the weigh-in.

Fury also elicited a roar of laughter from the assembled media during Wednesday’s press conference as he playfully grabbed Whyte during the face-off.

‘War’ in the ring

As expected, however, all the niceties disappeared when the first bell rang; Fury had promised fans “a real war” in the ring and it was certainly a promise he kept.

With the defending champion bragging about the superior skill if the fight went this far and decided on points, Whyte knew his only realistic chance of claiming the title was by knocking out Fury, so he understandably started on the front foot .

After a tentative opening lap, Whyte waved off at the start of the second with a massive right hook that elegantly dodged Fury and pulled the first ‘ooh’ out of the crowd.

As round three drew to a close, Fury landed two punches on Whyte and nodded approvingly.

By the fourth, the fun was really over. Whyte seemed angry with Fury for an apparent use of the head, prompting referee Mark Lyson to speak sternly to both men in their respective corners.

The collision created some animosity in the fight as Lyson had to pull the fighters apart again after landing several punches as they clinched into the corner.

For a split second, Whyte looked like he was going for Fury after the bell rang, apparently unhappy with what he initially thought was a late jab.

The tension was so great that the referee was forced to bring the fighters together in the center of the ring before the fifth round started.

The crowd at Wembley rose to their feet after Fury first dealt a blow to Whyte’s body, before staggering his opponent for the first time with a shot to the head.

Whyte started to look more and more desperate as the sixth lap went on and ended up in the ropes after targeting a wild swing that Fury easily avoided.

It was the beginning of the end for an obviously tired Whyte.

The light went out instantly for Whyte, who fell straight onto his back like a large felled tree. He did well to get back up, but Lyson had to give up the fight after Whyte staggered past him.

Now what for Fury?

Now the question is: what next for Fury? The 33-year-old insisted several times during the week that he would quit after the fight, a claim training partner Joseph Parker called “very sincere”.

Fury said in his post-fight interview that these were now “curtains” to his boxing career.

It remains to be seen if Fury will keep his word, but this is a fighter who is still at the peak of his abilities and the thought of unifying the heavyweight titles should remain a tantalizing proposition even for a man who has so much has achieved in sports.

Following his dismantling of Anthony Joshua, Ukraine’s Oleksandr Usyk holds the other heavyweight belts and a fight between Fury and one of those fighters would be a mouth-watering clash for fans of the sport.

With 94,000 fans hanging on his every word, joining in with his now signature rendition of Don McLean’s “American Pie,” it sure would be hard for Fury to say no to anyone under the lights last night.