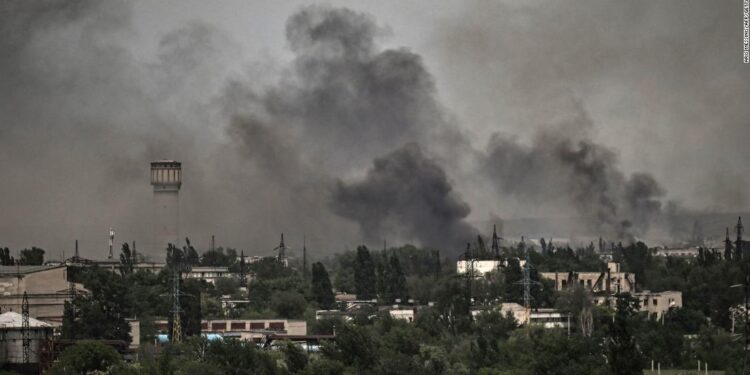 Ukraine now controls about half of the city of Severodonetsk in eastern Ukraine after reclaiming some land from the Russians, said Serhiy Hayday, head of the Luhansk region’s military administration.

Hayday was responding to a question about an intelligence assessment from the British Ministry of Defense, which predicted that Russia would control the entire Luhansk region within two weeks.

Two weeks is not realistic. It’s just unreal,” Hayday said Friday. “Previously there was a difficult situation, and somewhere around 70% [of Severodonetsk] was caught, now we have already put them back somewhere around 20%.”

The Russians had managed to take most of the city before, but now our army has pushed them back. They are suffering really huge losses,” he said in further comments on Saturday.

“The dire situation remains in the region as a whole, and Severodonetsk is now just a concentration of hostilities because the Russian military – as we understand – is throwing all its reserves in this direction,” Hayday said.

Currently, the Ukrainian military has no long-range artillery, which could be a game changer for the battle in the east, Hayday said.

“They are moving forward step by step. They just destroy everything with artillery, planes, mortars and tanks,” Hayday said. “But once we have enough western long-range weapons, we will push their artillery away from our positions. And then, believe me, the Russian infantry will just run.”

Street fighting continues in Severodonetsk and Ukrainian troops are still trying to “pull back the enemy,” he said.

On Friday, the Russians tried to “encircle Ukrainian troops” in the city and neighboring Lysychansk, but were unsuccessful. In total, Ukraine has repulsed a total of nine attacks by the Russians in the Donbas region in the past 24 hours.

Russia is also blowing up bridges to prevent Ukraine from sending reinforcements to the region, Hayday said.

“They are really afraid that the success of our defenders will develop, and it can if the ammunition, weapons and reinforcements are delivered on time. This is the first thing they fear,” said Hayday. “The Luhansk region is a huge outpost for us, we’re holding it now.”

About 30 miles (18.6 m) south of Severodonetsk, three people, including a mother and child, were killed in Hirske on Friday, Hayday said.

The humanitarian situation in Severodonetsk is “very difficult,” Hayday said, as they are currently unable to evacuate people safely or deliver humanitarian aid to the city.