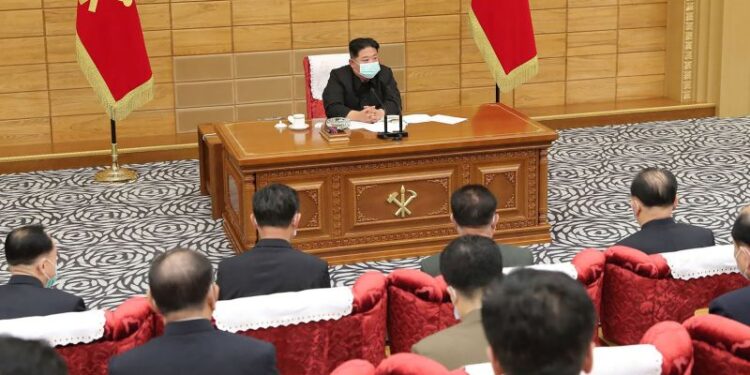 
According to leader Kim Jong Un, North Korea’s first outbreak of Covid-19 is the “biggest turmoil” to hit the country since its founding more than 70 years ago, as the isolated and impoverished nation struggles to contain the spread of a highly communicable virus that threatens to cause a major humanitarian crisis.

North Korea reported 21 more deaths and 174,440 new “fever cases” on Friday, according to state media KCNA, though it did not specify how many of the deaths and cases were related to Covid, likely due to the country’s extremely limited testing capacity.

The soaring death toll and soaring “fever cases” come after North Korea said on Thursday it had identified its first-ever case of Covid-19 — an alarming development for a country with one of the world’s most vulnerable public health systems and a largely unvaccinated population. .

But given the opaque nature of the regime and the country’s isolation from the world — a trend that has only worsened since the pandemic — it is extremely difficult to assess the real situation on the ground.

Foreign diplomats and aid workers had fled North Korea en masse in 2021 due to shortages of supplies and “unprecedented” restrictions on daily life, making it all the more impossible to obtain information from the country other than through official state media.

But North Korean state media reports have been vague and many important questions remain unanswered, including the country’s vaccination rate and the impact of the lockdown on the livelihoods of its 25 million people.

Here’s what we know and what we don’t know about the outbreak:

North Korean authorities have not disclosed the cause of the outbreak.

North Korea’s borders have been sealed off since January 2020 to keep the virus at bay, making the so-called “hermit nation” even more isolated from the world. It even declined invitations to send teams to participate in the Tokyo and Beijing Olympics, citing the threat of Covid-19.

And as new variants emerged, it stepped up those efforts, cutting off nearly all trade with China — the country’s largest trading partner and economic lifeline for the Kim regime — with imports from Beijing slashed from September to October 2020. 99% fell.

It remains unclear how the virus slipped through the tightly sealed national borders.

When KCNA reported on the country’s first Covid-19 identification on Thursday, it didn’t even mention how many infections had spilled over. It simply said that samples collected from a group of people who had a fever on May 8 had tested positive for the highly contagious Omicron variant.

On Friday, KCNA reported that 18,000 new “fever cases” and six deaths had been registered on Thursday, including one that tested positive for the BA.2 subvariant of Omicron.

“A fever, the cause of which could not be determined, has spread explosively across the country since the end of April,” the newspaper said. “Right now, up to 187,800 people are being isolated.”

On Saturday, KCNA said a total of 524,440 people had reported “fever symptoms” between the end of April and May 13. Among them, 280,810 people were still being treated in quarantine, while the rest had recovered.

An outbreak of Covid-19 could be disastrous for North Korea. The country’s dilapidated health care infrastructure and lack of testing equipment are unlikely to be up to the task of treating a large number of patients with highly contagious disease.

North Korea has never formally acknowledged the deaths of a devastating famine in the 1990s, which experts suggest killed as many as 2 million. Those who fled the country at the time shared horrifying tales of death and survival, and a land in chaos.

“North Korea has such a limited supply of basic medicines that public health officials have to focus on preventive medicine. They would be ill-equipped to deal with any kind of epidemic,” said Jean Lee, director of the Hyundai Motor Korea Foundation Center. for Korean History at the Woodrow Wilson Center in Washington, at the start of the pandemic to DailyExpertNews.

Doctors defecting in recent years often speak of poor working conditions and shortages of everything from medicines to basic health care.

Choi Jung-hun, a former doctor in North Korea who fled the country in 2011, said North Korea lacked the resources to work in 24-hour quarantine and isolation when he helped fight an outbreak of coronavirus. measles in 2006 to 2007 facilities.

He recalled that after identifying suspected cases, doctors’ guides said patients should be transferred to a hospital or quarantine facility for surveillance.

“The problem in North Korea is that manuals are not followed. When there was not enough food for the people in hospitals and quarantine facilities, people escaped to look for food,” Choi said in a 2020 interview with DailyExpertNews.

On Thursday, Kim placed all cities on lockdown and ordered “people with a fever or abnormal symptoms” to quarantine; he also directed the distribution of medical supplies that the government reportedly stockpiled in the event of a Covid emergency, according to KCNA.

Kim later chaired a meeting of the country’s powerful politburo, which agreed to implement “maximum” emergency measures against epidemics. The measures include isolating work units and proactively conducting medical checkups to find and isolate people with “fever and abnormal symptoms,” the KCNA reported Friday.

“Practical measures are being taken to maintain production in key sectors of the national economy and to stabilize people’s lives to the maximum,” KCNA said.

According to KCNA, the politburo criticized the country’s anti-epidemic sector for “carelessness, laxity, irresponsibility and incompetence”, saying it was “not responsive” to the increasing number of Covid-19 cases around the world, including in neighboring regions. .

A reporter for Chinese state media CGTN released a rare video from Pyongyang on Friday, recounting his experiences on the ground.

“As far as we know, not many people in Pyongyang are vaccinated, and medical and epidemic prevention facilities are scarce,” reporter Zang Qing said in a Weibo post.

“Because the capital is locked, the food I have at home is only enough for a week. We are still waiting to see what policy the government will announce next.”

At a meeting on Saturday, Kim inspected the country’s epidemic emergency measures and medical supplies. He also urged North Korean officials to learn from China’s “advanced and rich quarantine results and experience they have already gained in their fight against the malignant infectious disease,” according to KCNA.

North Korea is not known to have imported coronavirus vaccines, despite being eligible for the global Covid-19 vaccine-sharing program, Covax.

Assuming most North Koreans are unvaccinated, an outbreak in the country — which has limited testing capabilities, inadequate medical infrastructure and has shut itself off from the outside world — could quickly turn deadly.

Calls for access to vaccines are mounting in the country’s leadership.

“There is no evidence that North Korea has access to sufficient vaccines to protect its population from Covid-19. Yet it has turned down millions of doses of AstraZeneca and Sinovac vaccines offered by the WHO-led Covax program,” Amnesty International’s East Asia researcher Boram Jang said in a statement.

“With the first official news of a Covid-19 outbreak in the country, continuing down this road could cost many lives and be an unscrupulous disregard for the right to health.”

According to Reuters, in February, Covax scaled back the number of doses allocated to North Korea because the country had not arranged transportation.

A spokesperson for Gavi, the Vaccine Alliance, said Covax has moved to “need-based vaccine allocations” and “has not currently committed any volume” for North Korea.

“If the country decides to start a Covid-19 vaccination program, vaccines could be made available based on criteria of Covax targets and technical considerations to enable the country to catch up with international immunization targets,” the spokesperson said.