When anchovies mate, they stir the ocean and boost a healthy ecosystem, study finds 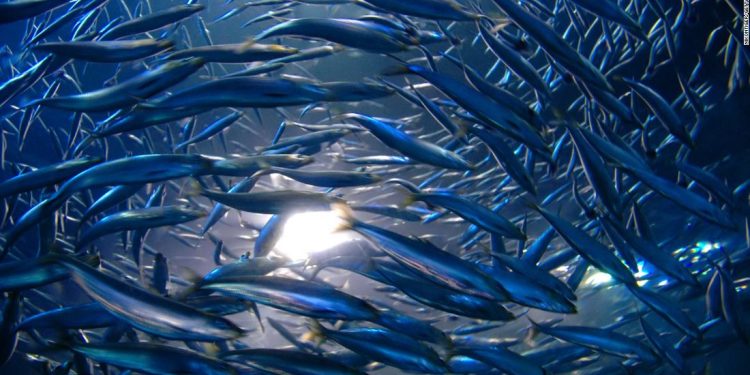 
Researchers analyzed ocean turbulence over 14 days in Ría de Pontevedra, a coastal inlet in northeastern Spain. They found that turbulence increased 10 to 100 times when anchovies gather to mate during spawning season — and that the ocean mixing caused by fish cuddling is as efficient as that caused by geophysical turbulence such as storms, winds, tides and other natural forces.

Although the weather was calm during the period of the study, farming the anchovies made the water as turbulent as if a major storm had occurred. Like many fish, anchovies reproduce by spawning, with the females releasing eggs and the males releasing sperm to fertilize them.

Researchers collected samples with small fishing nets, which found recently released European anchovy eggs — a sure sign that the fish were spawning nearby.

The study, published in the journal Nature Geoscience on April 7, found that fish’s ability to rock the oceans is strongest near the coast, where the ocean layers are shallower.

The ocean is made up of multiple layers, with lighter, warmer water at the top and denser, cooler water at the bottom. Mixing the layers helps circulate nutrients and oxygen, keeping the ecosystem running.

The findings are in stark contrast to previous research that has shown that “biomixing,” as caused by the fish, has minimal impact, especially in open water.

“We believe biological mixing was intense in our observations because the bay is very stratified,” said Dr. Bieito Fernández Castro, the research associate at the University of Southampton who led the study, said in a press release. “The temperature and other properties vary considerably at different depths.”

The fish’s “frantic behavior” during mating, researchers found, brought together the stratified ocean layers in the bay.

This mixing, whether caused by natural forces or marine life, helps to circulate oxygen and nutrients and redistribute the temperature of the water, supporting the healthy functioning of the ocean ecosystem.