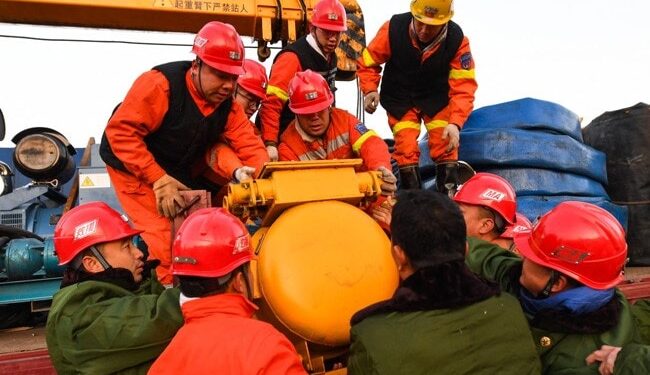 Hundreds of rescuers were sent to the mine, where three pumps were draining water.

Twenty workers were rescued and two bodies were recovered from a flooded coal mine Friday after a dramatic rescue operation that lasted more than two days, officials said.

A massive recovery effort was launched when the illegal mine in northern China’s coal-producing Shanxi province flooded late Wednesday.

State media had previously reported that 21 people were trapped in the mine in the city of Xiaoyi, where hundreds of rescuers used pumps to drain the water.

China’s Ministry of Emergency Relief said in a statement Friday night that 20 miners were lifted to the surface and two were killed.

“Shanxi Province (should) immediately arrange an investigation and collect evidence, make every effort to pursue fugitives and hold accountable in accordance with laws and regulations,” the ministry said, adding that the province must “take crackdown illegally.” against illegal mining activities”. .

Three senior Xiaoyi city officials, including the mayor, have been removed from office as a result of the mining accident, the local government said Friday.

State broadcaster CCTV said close and hidden access to the illegal mine had hampered rescue efforts, as did the lack of a proper map of the site.

Seven suspects have been detained for the accident and police said they were looking for others, including the owner of the mine, allegedly a local villager who had fled after the accident.

State television showed rows of rescuers dressed in orange with hard hats carrying the miners on stretchers to ambulances.

China generates about 60 percent of its energy from burning coal, and had ramped up production in recent months to solve an energy shortage that had caused power cuts and forced factories to close.

Authorities said on Thursday that high demand for coal has pushed up prices and cases of illegal mining.

The State Council’s Occupational Safety Committee and the Ministry of Emergency Management called on the coal-producing provinces to investigate illegal mines, and said those involved should be prosecuted.

In August, the former mayor of Xiaoyi launched a 100-day campaign to crack down on illegal mining by local criminal gangs.

Mining accidents are common in China, where the industry has a poor safety record and regulatory compliance is not necessarily followed.

19 miners died after being trapped underground in a single mine collapse in September.

And in January, 11 of the 22 workers were dramatically rescued from a collapsed mine in eastern China after being trapped hundreds of meters underground for two weeks.

China’s mine safety authority said last week that improved workplace regulations meant there were 336 mining accidents so far in 2021 – 59 fewer than last year.

But it warned of an increased risk of incidents in December as mines sacrifice production safety for output as the year approaches.