20 years later, the story behind the Guantánamo photo that won’t disappear 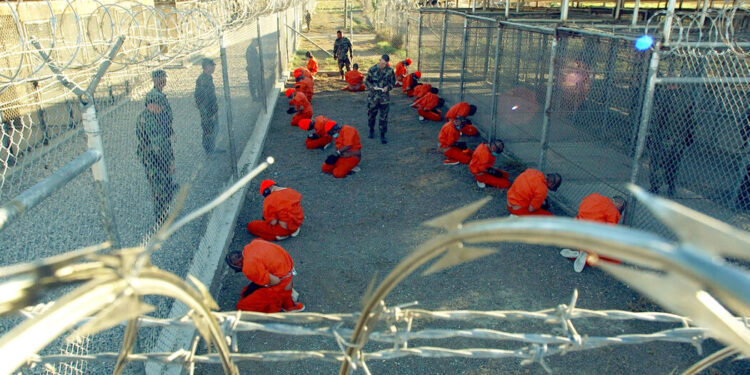 GUANTÁNAMO BAY, Cuba — Four months after the September 11 attacks, a photographer hoisted a camera over shiny new barbed wire and took a photo of 20 prisoners on their knees in orange uniforms, handcuffed, masked and heads bowed.

The image sparked a debate over what the United States was doing in its offshore prison, which is in operation to this day. It also became one of the most enduring, scathing photographs of US detention policy in the 21st century.

But lost in time and in the collective memory for many is that the photo wasn’t some leaked image of torture that the public wasn’t allowed to see. The photo was taken by a US Navy photographer, which was intentionally released by the Department of Defense.

“I did exactly what I had to do,” said photographer Shane T. McCoy. “It was my job to document it. I absolutely had to photograph it. And I had to send it.”

The date was January 11, 2002. In Afghanistan and Pakistan, local allies had picked up hundreds of suspected foreign fighters and Qaeda members and delivered them to US forces. The CIA had yet to set up its secret prison network. The scandal over the abuse of detainees at Abu Ghraib prison in Iraq was years gone.

And an Air Force cargo plane had taken the first prisoners to the base in southeastern Cuba — the “least worst place” for the mission, Defense Secretary Donald H. Rumsfeld said. Mr. McCoy, a non-commissioned officer at the time, was assigned to shoot opening day at Camp X-Ray for the elite Combat Camera unit.

In time, the United States would hold about 780 prisoners at the remote outpost. Within months, after the first 300 prisoners were taken there, the Pentagon had erected crude rows of cells welded from shipping containers. Later, the military built air-conditioned prisons, where the last 39 detainees are held today.

To the chagrin of a succession of military commanders, the image of those first 20 men on their knees would not disappear.

Newspapers and magazines regularly feature it in articles about the United States’ prison, base, and war on terror. Protesters don orange and imitate it. Islamic State fighters took it, put hostages in bright orange clothing and executed them.

It has become so ubiquitous, so characteristic of US detention policies, that some don’t realize it was taken at Guantanamo Bay, the prison from which the George W. Bush administration built its demonstration detention operation.

In a recent episode of “60 Minutes” about a former National Security Agency contractor who leaked a government document, the Guantánamo photo released by the U.S. military filled the screen to illustrate the idea that the government has used classification “to misbehavior – torture in the war on terror, for example.”

How you see that photo will depend on “your politics, your awareness of Guantánamo and what happened there — your capacity for empathy, whether anyone in your family has ever been in prison,” said Anne Wilkes Tucker, the former curator of photography at the Museum of Fine Arts in Houston.

“That photo will probably be interpreted and reinterpreted forever,” she said. “It’s so rich and can call for 180-degree interpretations. From ‘We got them’ to ‘More than half are probably innocent.’”

Hours before the first 20 men arrived, the Marine in charge of setting up Camp X-Ray, Brig. Gene. Michael Lehnert, described them as “the worst of the worst” of the prisoners held in Afghanistan. It would eventually be clear that wasn’t true.

Only two are being held today. Of those first twenty, eight had been released by the time Bush left office. No one was ever charged in the September 11 attacks.

In Senate testimony last month, Mr. Lehnert, who retired as a major general, called the venture he had set up misleading and contrary to American values. He insisted on closing.

Mr. McCoy, 47 and now a photographer for the US Marshals Service, remembered that day as a long one. He’d split the duties with another naval photographer, and with a coin toss captured the men awaiting registration in a makeshift open-air enclosure.

He chose about 100 images, wrote captions, and sent them to Washington.

About a week later, news organizations in the Pentagon clamored for transparency about the burgeoning detention operation in Cuba. There was grainy, night-vision news broadcast from Afghanistan showing US soldiers leading prisoners in rags, with bags on their heads.

“The challenge was that the Geneva Conventions specifically prohibit holding detainees for public ridicule or humiliation,” Victoria Clarke, Mr. Rumsfeld’s spokeswoman, wrote in her 2006 memoir, “Lipstick on a Pig.” In order to “silence some of our critics,” she was granted permission and released five photos.

People at the Pentagon saw an image of securely held, anonymous inmates complying with the Geneva Conventions’ obligations to protect prisoners from “public curiosity.”

In the world, some people found the images cruel. They saw degradation, sensory deprivation and submission.

“Did I ever misread what was in those pictures,” wrote Mrs. Clarke. “Instead of demonstrating the care and concern with which we treated the detainees, the photos served as high-octane fuel for our critics and doubters.”

Some in Europe were particularly offended. The dragnet in Afghanistan and Pakistan had rounded up Anglophone Muslims, including some from Western Europe, and sent them to Guantánamo Bay.

“Shaved and confused,” said a headline accompanying the photo in Glasgow’s Sunday Herald. “Even our enemies have human rights,” declared the London Sunday Independent. ‘Guantánamo Scandal’, was the title of a blurb on the front page of Le Monde. The Mirror tabloid questioned the alliance between Prime Minister Tony Blair and Mr Bush. “What are you doing in our name, Mr. Blair?” said a tabloid cover with a photo from the first day.

“I think it’s a lack of visual literacy from, in this case, the military,” said Fred Ritchin, a former professor of photography and imaging at New York University’s Tisch School of the Arts and dean emeritus of the International Center of the Arts. Photography.

“The attempt here, as far as I understand it, seems to have been to try and show good guys who would pick up those who might have been considered the bad guys, when they thought they were doing it humanely,” he said. “Other people don’t see it that way.”

Both Mr. McCoy and Ms. Clarke said the Pentagon failed by not providing a more complete explanation of what happened in the photo.

“It was this little piece of what happened down there, without seeing the whole pie,” said Mr. McCoy, such as “taking a few words out of context” and creating an alternate story.

The photo showed a moment when the inmates sat cross-legged on their knees “so they can’t get up quickly and run away,” said Mr. McCoy, who has watched law enforcement officers put prisoners on the ground in the same way.

Without adequate explanation, Mr McCoy said, “You just see the photo that made people furious.”

“I’ve always believed that people should be able to see the most of what the government is doing,” he said. “I don’t mind having a piece of history. I don’t mind being the one in the camp documenting it. If things have changed for the better, that’s great. I have never witnessed abuse.”

Mr. Rumsfeld tried to repair the damage by saying the detainees were passing through and not being held like that. “I think a lot of people saw that and said, ‘My goodness, they’re being forced to kneel,’ which isn’t true,” he said.

He called it “probably unfortunate” that the images were released. The Pentagon stopped issuing them. By this time, major news agencies had distributed them.

Petty Officer McCoy learned of the reaction to his photos and called his mother. “I told her that I had caused an international incident. She said, “I’m so proud of you.” She knew I was just doing my job.”

When Mr. Rumsfeld came to Guantánamo later that month, the photographer pulled the boss aside and apologized. The defense secretary declined the gesture, he said, noting that the sailor was performing his duties.

Mr. McCoy left the military in 2009 with a 100 percent disability. After his assignment in Guantánamo, he carried out a series of distant assignments, including in Iraq, with the heavy body armor of the time and heavy equipment. mr. McCoy has five hernias in his back, bad knees, bad ankles and joint pain.

He still hoists a camera and sometimes dons a bulletproof vest in his current job. But the equipment is lighter. Along the way, he stays in hotels, not forward operational bases. Gone are his days of swinging off a floating helicopter with suits on his front and back and bouncing a 70-pound gearbox. He drives a car to assignments.

He said he took much better photos, many of which were never released.

A favorite of the day showed a female soldier, the kneeling prisoners blurred in the background. Mr McCoy said the way he saw it, some men in custody “didn’t have much respect for working women.”

But none have been reprinted and reused as much as the first day of detainees at Guantanamo Bay.

This summer, while on vacation with his wife and daughters, they saw it in a display case in a defunct Philadelphia prison where Al Capone was once incarcerated. “It had my name on it,” Mr. McCoy said. “I’m no longer surprised to see it somewhere.”

Never would Mr. McCoy have thought that “20 years later I would still see those photos being used.” On that day, in that spot, “I thought I had a chance to be the only photographer in the camp.” History happened and he had the exclusive, if only for the Department of Defense archives.