A Korean tasting menu with verve and polish, in Jua 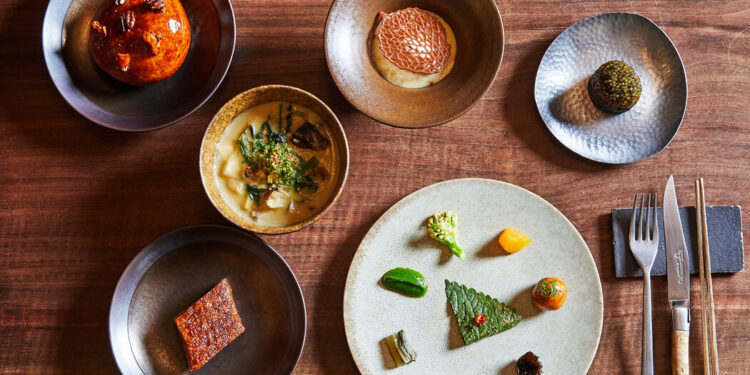 Hoyoung Kim’s tasting menu at Jua often begins with an inky dark column about 6 inches (15 cm) high. The bottom third is wrapped in puffed seaweed which, in its specific degree of crunch, is reminiscent of a Pringles chip. Above that, caviar is piled up in a tall black beehive, like Marge Simpson’s hair in the Halloween episode where she showed up as a witch.

The obvious move is to pick up the thing by the base and eat it like an ice cream cone, but the server said something about trying to get all the flavors in one bite. Inside, from bottom to top, is a base of truffle rice, crispy shards of pickled berg yam and kimchi, and finally a spoonful of chopped raw short ribs, smooth with sesame oil, just below the roe.

What Mr. Kim has done is take and dress up kimbap, that hearty and filling staple of Korean lunch boxes, picnic baskets, and takeout containers for a black-tie event. He has also worked out several other kimbap variations, including one filled with sea urchins. One version or the other almost always bats first in Jua’s menu, and for good reason: once you eat it, you probably trust anything that comes out of the kitchen.

When Jua opened on East 22nd Street two years ago this month, it joined a small and growing cluster of restaurants that gave Manhattan a polished, modern and worldly take on Korean cuisine. Los Angeles still offers an as in-depth and comprehensive overview of traditional Korean food as it does outside of South Korea. But for modern, creative Korean restaurants, there’s no place outside of South Korea to rival New York. The local scene is so strong that it has already recovered from the recent demise of Hanjan and Kawi, each as good a contemporary Korean-American restaurant as any city could hope for.

Many of these places, including Atomix, Kochi, Joomak Banjum, and Jua, have a fixed price, multiple courses. It hasn’t happened yet, but one day someone I invite to dinner will reject me by uttering a phrase that would have been unthinkable ten years ago: “No thanks, I had a Korean tasting menu last night.”

This restaurant genre was essentially invented by South Korean chef Jung Sik Yim, who opened the first Jungsik in Seoul in 2009, followed by one in TriBeCa in 2011. Although his country has its own traditions of fine dining, the project was from mr. Yim om apply the form of modern Western European and American fine dining to Korean food. For example, traditional serving dishes were flipped in favor of wide china plates and bowls on which sauces and ingredients were arranged as meticulously as brushstrokes on a Kandinsky.

While the arty, straightforward Jungsik slipped alongside names like DOM (in São Paulo) and Disfrutar (in Barcelona) on global best restaurants lists, other Korean restaurants in Manhattan experimented with a looser, less starchy style. Danji and Hanjan served galbi skewers, bulgogi sliders, and other casual but light-hearted Korean food, inspired by what used to be called gastro-pub cooking. Gastropubs also inspired the Hand Hospitality group, starting with its first restaurant, Take 31.

As Hand Hospitality grew, it began to specialize in cool, concrete-filled restaurants whose menus had fresh ideas to innovate Korean cuisine. The line between a fresh idea and a gimmick can of course be beautiful. The LittleMad of the group adds truffles, caviar, or sea urchins to almost any dish for about $10, in case your philosophy is that life without truffles isn’t worth living. At Kochi, which is not affiliated with Hand Hospitality, every dish is skewered, whether it’s needed or not.

Some notable restaurants are the result of combining the atmospheric strengths of Hand Hospitality’s dining rooms with the technicalities of Jungsik’s cuisine. The group teamed up with Junghyun Park, who had cooked in both New York’s Jungsik and Seoul, to build Atoboy and Atomix. And in 2020, Hand Hospitality teamed up with Mr. Kim, who had spent eight years at Jungsik’s TriBeCa location, to open Jua.

Jua serves food with a tasting menu in a space that doesn’t look like a tasting menu restaurant (although the price, $130 for a seven-course dinner excluding tax and tip, is definitely tasting menu money). It stands out from the rest of the pack in the skill with which Mr. Kim incorporated the grill into his versions of Korean cuisine. You could argue that grilling food over a wood fire is also a gimmick, but if it’s a gimmick, it’s at least as good as sticking a stick through every hallway.

Exposed brick walls, rough ceiling beams and polished concrete floors give Jua’s dining room the appearance of a partially reclaimed industrial loft. The first time I ate there I felt like I had escaped the city for a few hours, but I couldn’t understand why. The next time I sat in the back, closer to the kitchen, and I understood: The smoke from a wood-fired grill makes this restaurant around the corner from the Flatiron Building smell like a cabin in the Catskills.

Recently, the caviar kimbap has been followed by a bowl of jook enhanced with king trumpet mushrooms and smoked eel. It’s warm and creamy, as a good joke should be, but the eel gives it an unexpected depth and smokiness.

Then comes a beautiful sunset-colored strip of Arctic char under the skin with blisters that has been blackened with extreme precision. How could fish cooked over a fire stay so rich and juicy? Before his appointment to the grill, he had been poached in smoked olive oil. The char was served over asparagus (in late fall, though?) with a fish bone broth that brought another puff of smoke to the proceedings.

Grilled duck breast arrives with garnishes on their own plates, including a dead-ripe wedge of persimmon and a hot soy-glazed aubergine fritter resembling a Timbit from a deceitful Tim Hortons. These are beautiful, like the salted cucumber, with a black filigree of charred wood, as delicately applied as the lace around the neck of one of Rembrandt’s citizens.

The rest of the garnishes are a bit fuzzy, in part because Jua’s servers have a habit of quickly flipping through their descriptions of the dishes as if they were reading the side effects of a Cialis ad. This happens at many tasting menu restaurants; servers don’t learn to bring each course to life with words as they do when they have to guide customers through an a la carte menu. It’s one of the quirks of the tasting menu format: the more elaborate the board, the less you hear about it.

However, dessert does not require instructions. The green tea shaved ice served in the summer gave way this fall to a secretly appealing kabocha pumpkin dessert soup poured over ice cream with brown butter. However, the last course is always hotteok. On the streets of South Korea, hotteok resemble pupusas in structure and can handle hundreds of fillings. However, the hotteok at Jua are puffy and golden brown and crunchy with candied nuts. It’s like fritters trying to pass for sticky buns and almost get away with it.