A love language spoken with hands 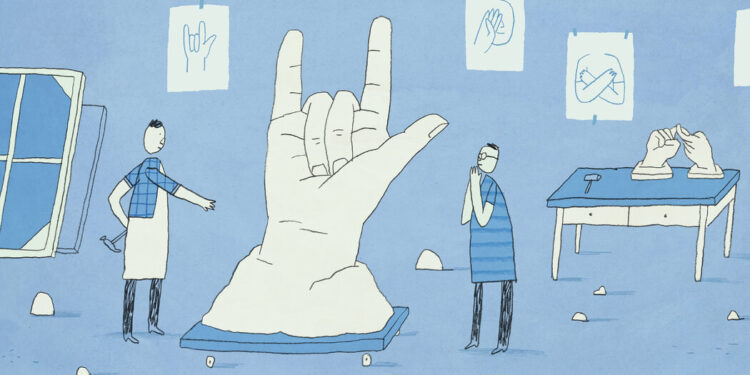 One gloomy January day, my phone lit up: Will had sent me a video. Something pooled in my stomach. I knew what the video captured, but I didn’t quite believe it. In the solitude of my bedroom, I bent over my phone and pressed play.

In the video, Will stepped back from the camera (his phone). He was wearing a striped polo shirt. Behind him hung a multicolored shower curtain. Slowly, carefully he signed, “Hello, how are you? I am fine. Thank you, my friend, Ross.” Nervous relief flooded his face as he finished spelling my name.

I went into a state of disbelief. Will had texted me days earlier to say he’d taught himself sign language. When I read his lyrics, I had felt a jolt of surprise – followed by suspicion.

I am a deaf person. For the past 10 years, since I turned 18, hearing men have flirted with me and taken me on dates. The only thing they have in common is the promise they all make: “I’ll teach you sign language.”

None of them followed. No one signed up for a class or studied the textbooks I recommended.

As a child I learned to lip-read, parse words from lip movements and fragments of residual hearing. I took speech classes, which technically stopped when I graduated from high school. Today I am being coached on word pronunciation of good hearing friends.

My parents gave no explicit reason to let me take speech lessons. The implicit reason for me was to do the work of communication that non-signers are not interested in. Communicating in spoken language means adapting to society depending on sound.

All the men I’ve dated rely on the fact that I speak. They didn’t have to do any extra work to communicate with me as I did the work for them.

Will is different. Will is the first man in nine years to learn sign language for me. He never promised to learn gestures – he just put himself to work.

I pressed play again and watched Will’s careful gestures, his fingerspelling, his nervous relief at the end. I looked again and again until my disbelief evaporated.

I met Will on Twitter a year ago. He lives in a neighboring state. In the beginning we sent direct messages to each other. As our friendship grew closer, we texted each other late into the night as the pandemic raged outside our doors.

When I started talking to Will, I was grieving a messy divorce from a college professor — a person who uses pronouns — who said they wanted to teach me sign language. I told them they didn’t have to; I don’t want to hold anyone to a promise they don’t mean. And I don’t want to be disappointed if they don’t keep their word.

That convinced me that the professor meant it. I gave them resources and encouraged questions, but they never asked me questions or sent a single video. After four months I gave up, angry that I had been lied to again.

To the professor, a finance manager surprised me when he said, “I’ll teach you sign language.” In remission from larynx cancer, he was still at risk of going dumb, and I wanted to ask, “Why not learn it yourself?” Worried about crossing a border, I went on autopilot and said, “You don’t have to.”

For the finance manager, a nurse said he would take sign language lessons. Earlier, a social worker said the same thing. Before that, a data analyst did the same.

It feels overly dramatic to say that a lie has run through most of my dating life, but no other sentence captures the truth so succinctly. For hearing people, the promise to learn sign language is less of a promise of action than a reconciliation, as if trying to comfort themselves more than I am, maybe some guilt. Past attempts at relationships have failed because the intent to learn is not genuine.

“It’s unbearable,” Will texted when I told him about the professor. “If someone wants to start a relationship with you, the least they can do is try their best to communicate with you better. In your case, that sign would be learning. And someone who agrees to do this and then doesn’t do it imposes an obligation to communicate.”

Will showed me that not everyone makes promises they don’t want to keep. I don’t need to invest in someone who promises an action they will never do. Relationships only progress when the work of communication begins.

In mid-April I took the train to his town, my first trip during the surreal whirl of the pandemic. I hadn’t left my house since March of the previous year; instead, I’d stared at the same walls in my house, reading and rereading all my favorite books, and celebrating birthday after birthday on Zoom and FaceTime. I got on the train because I wanted a change.

I met Will on that trip. He was bigger than I expected. He hugged me tight and I smelled musk. We started talking in my hotel room, and he reached across the table and grabbed my hands. As he sat there, Will was more beautiful than any video could capture. I had a hard time believing, even with him right in front of me, that he was real. Desire gathered in my stomach and I couldn’t help but rub his palms with my fingers. I wanted to touch him. I wanted to feel him. I wanted him.

When Will told him to make me work, I hugged him goodbye and kissed him on the cheek. He kissed my cheek in turn. I pulled back to stare at him, then leaned forward, my eyes flashing to his mouth.

Moments later, he jumped out of bed. “I want to try something,” he said.

I knew immediately what he meant. I sat up and planted my chin in my hands.

Will signed every letter of the alphabet from A to Z. He did J backwards. He confused G and Q, and I had to show him H. But I took it with a smile. After his index finger sliced ​​a Z through the air, I got up from the bed and kissed him.

Sometimes you don’t know what you’re missing until someone shows it to you. Sometimes you think it can’t even exist.

Will and I are not dating, technically. He likes to call our relationship a middle ground, a space between friendship and romance. After all, we live many miles apart. We try to be pragmatic.

Anyway, Will still sends me sign language videos, two or three a week. In his latest video, he drew excited contradictions (“like is the opposite of not wanting!”). I corrected it on posting: “You’re doing the sign for the opposite making it look very close to ‘but’.”

Seven months after we started talking, Will enrolled in an online sign language course. “The YouTube videos aren’t enough anymore,” he texted. “I want structure. I want a teacher. I want a class. I want more.”

When I read his text at that moment, I couldn’t help but think of the professor, the financial manager, those who hadn’t followed through. I wondered what they would look like if they drew. I feel a little sting of disappointment when I think of them.

There’s the haze of false promises, and then there’s Will, crystal clear. Will means something more. I hadn’t believed him when he told me he was teaching himself gestures, but then he showed me something I could believe in.

Even now that Will is enrolled in a sign language class, I still feel disbelief and worry. One person cannot undo nine years of frustration. I’m worried Will is getting tired of sending videos, signing a phone camera. I’m afraid he’ll wake up one day, decide I’m not worthy of this job, and leave me. I worry that this core of disbelief – because honest communication can’t be that easy in any way – will somehow be justified. Will could become part of the haze, another reason for me not to trust men who can hear.

Right now, Will is showing that maybe I can believe people when they say they want to do the work for me. I don’t have to settle for relationships based on empty promises and false compassion. I deserve something real, meaningful. Will did something instead of promising it, and he made me think twice about rejecting the intentions of others.

Whenever Will sends me a video of him signing, it’s like saying, “The world could be a better place than you think. Let me show you.”