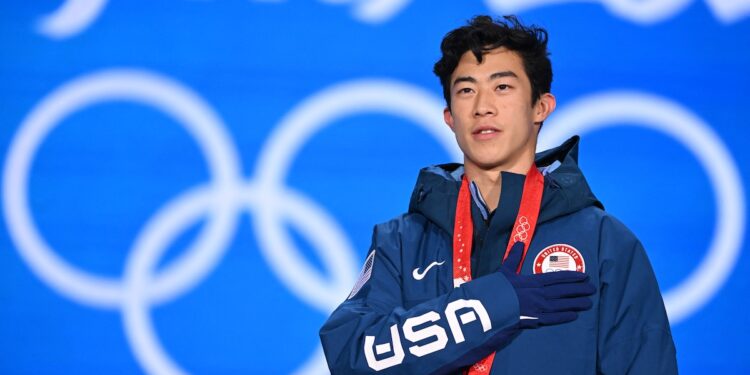 Nathan Chen said “he never thought he could get this far” when he won Olympic gold for figure skating in Beijing on Thursday, easily beating defending champion Yuzuru Hanyu, who fell twice to finish fourth. The American three-time world champion eventually claimed the only major prize that had eluded him with his total score of 332.60, more than 20 points ahead of his closest challenger. Chen controlled his nerves to score 218.63 in his free program, building on his record-breaking short program score from Tuesday to take gold from 18-year-old Yuma Kagiyama. Another Japanese skater, Shoma Uno, took bronze.

“I never really thought I could make it this far in my career,” said 22-year-old Chen.

“I’ve always dreamed of getting to the Olympics and winning the Olympics, of course, but I thought…I don’t know if I can make that happen. I haven’t really had time to fully process it, but it is great so far.”

While skating on Elton John’s “Rocket Man,” Chen lived up to his “Quad King” moniker in a routine in which he landed five quadruple jumps, to ecstatic cheers from the crowd.

After his final jump — which he later said “near tripped” — he broke into a hip-hop-esque dance choreography, obviously enjoying it.

“This program, no matter what happens, is always fun for me to skate,” he said afterwards.

When the music died, he lowered his head back in relief.

On the hunt for a third gold in a row and cementing his status as one of the greatest skaters of all time, Japanese icon Hanyu had a shaky start in the short program, seeing any gold prospects disappear when he fell twice in his second routine.

“I think I did everything I could,” said Hanyu, who arrived in Beijing on Sunday, two days before the game.

“Honestly, it feels like everything went wrong this time, but I tried my best.”

After finishing eighth in the short program, the champions of the 2014 and 2018 Games had to catch up by 18.82 points to beat Chen.

Dressed in a long sky-colored shirt embroidered with sequined flowers, Hanyu entered the rink to the shouts of the crowd.

He was visibly nervous before starting – he hung on the edge of the rink, stared at the floor and made the sign of the cross before taking his starting position.

The 27-year-old attempted a quadruple axis — a jump no skater has ever done in competition, but which he’d insisted he would perform in Beijing.

He failed to land it and fell on the ice.

He got up quickly, but fell again, before continuing his “Heaven and Earth” program with his usual polished precision.

Hanyu looked crushed as the music died down, but he recovered and skated off the rink with his head held high, while the crowd still cheered.

When asked about Chen’s performance, Hanyu said, “It was so great, it was so cool…I want to congratulate him.”

Chen said over the years it has been “an honor to share the ice cream with Hanyu.”

“Again, watching him when I was a kid, I never dreamed I’d even get the chance to skate with him.

“It was just a really big honor and in my opinion he is the best skater ever.”

Kagiyama, who flew around the ice on the rousing theme from the movie “Gladiator”, was the only other contestant to score above 200 points for the free program.

He is trained by his father, a former Olympian, who was moved to tears when his score was announced.

“Whether it’s a good time or a bad time, we’ve been together all the time and we’ve overcome these moments,” said the sweet-natured Yuma. “To be able to show that I have grown to him makes me very happy.”

When asked about Hanyu, Uno said he had been at the forefront of Japanese figure skating for years.

“I can’t match his spirit of staying on top.”

Uno fell once but otherwise delivered a controlled performance to “Bolero”.

“No one can expect perfect skating for every jump,” Uno said. “Except Nathan!”