Beyond Cool, She Was Fly. Her confidence gave me wings. 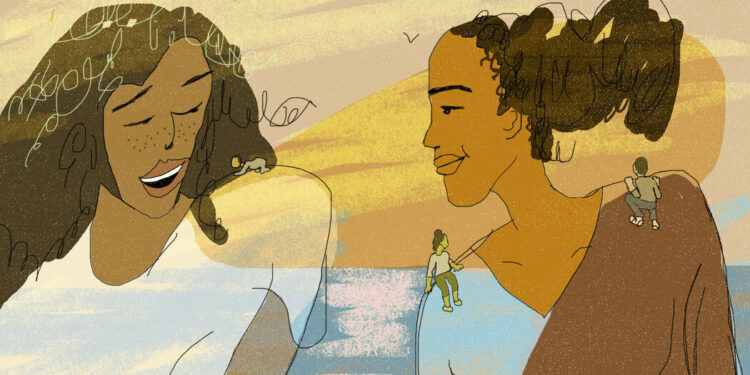 When I was 21, I had my daughter with my high school sweetheart. At the age of 23, I left the decomposing relationship for a life that could contain my dreams of securing a future for my daughter. I called Tiffany to tell her the news. She answered and I heard her three children playing in the background. Little Light was now the eldest and took her job as the protector of her two younger brothers seriously.

“Nice, are you sure?” Tiffany asked me. “Are not you scared?”

I laughed away the fear I was carrying and told her I would be back. That it was only for the summer. But Tiffany knew what I couldn’t see yet. That I would find writing and become the woman of my own dreams.

I wrapped myself in Tiffany’s charm and wore it until it became a second skin. That’s how I arrived in Bed-Stuy, Brooklyn. I only went out with men who called me beautiful. I flirted with anyone who could have an interesting conversation. I gave love a run for its money, because all that really caught my attention was my daughter’s health and laughter, and my burgeoning career in writing. I carried this new me everywhere: New York City, Poland, Great Britain and Canada.

As summer turned into a year and the year turned into a decade, I recognized so much of my cousin in the way I behaved myself. I loved how I looked at myself in the mirror. I loved how I looked because of the reflection in my daughter’s eyes. Like Tiffany, I began to move easily through rooms like the wind, soundlessly and confidently. This feeling stayed with me, from the red steps of our grandparents’ house in West Oakland to the Bed-Stuy canopies that became my refuge.

First, before she had her fifth child, Tiffany and I visited weekly, then monthly, after she had her seventh child. Phone calls turned into text messages as our lives went on. She raised eight children on her own and recovered herself after finally getting out of an abusive relationship. Every two years I went to visit, and when I couldn’t be physically there, I sent messages of support, care packages, and invitations for her to visit me on tour.

After 15 years of visits motivated by vacations and family reunions, I invited Tiffany to come to Florida. Tiffany had never been and had a break from her on-again, off-again relationship. I wanted to protect her. I wanted her to see what the world had to offer. She was the very best part of me. She gave me courage. She reassured me. She gave me pep talk. She complimented me. Loving others and celebrating them was natural for Tiffany. The least I could do was repay her generosity by giving her the space she needed to figure out who she wanted to be.