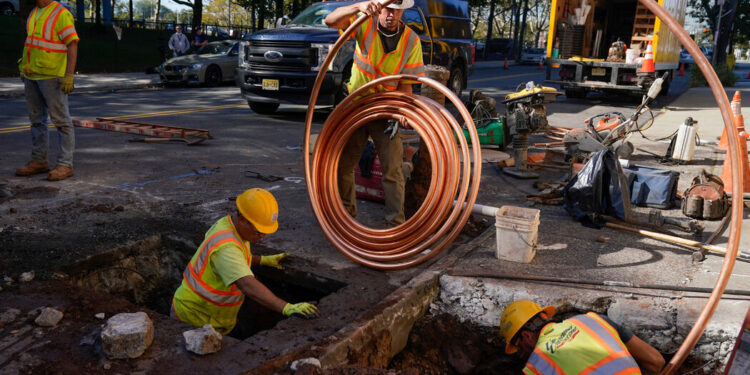 WASHINGTON – The Environmental Protection Agency will announce its intention on Thursday to propose stricter limits on the amount of lead allowed in drinking water and to begin replacing millions of lead pipes that snake across the country and pose a significant threat. for public health.

Lead is a neurotoxin that can damage the brain and kidneys and disrupt the red blood cells that carry oxygen to all parts of the body. It poses a particular danger to children, whose nervous systems and brains are still developing. From the earliest days of municipal water systems, lead has often been used in pipes, where it can leach into drinking water.

Today, as many as 10 million lead service pipes supply water to schools, offices, homes and nurseries across the country. According to an industry estimate, it could cost as much as $60 billion to replace them all.

At an event Thursday at AFL-CIO headquarters, Vice President Kamala Harris is expected to announce that the government will spend the first part of that money — $3 billion — on replacing pipes and reducing the health risk of lead paint, senior officials said.

Until it was banned in 1978, lead-based paint was used in homes, where it poses a danger to anyone who ingests paint chips or inhales lead in dust. About 24 million housing units are considered to have significant lead-based paint hazards.

Ms. Harris is expected to outline the first steps the EPA and other agencies will take toward the Biden administration’s goal of replacing every lead pipe and service line in the United States.

Government officials said on Wednesday they had no timetable for replacing the millions of lead pipes, saying they wanted it done as soon as “feasible”. Environmental groups said they’d like to see the EPA set a 10-year deadline.

“This really is a once-in-a-generation opportunity,” said Erik D. Olson, senior strategic director for health at the Natural Resources Defense Council, an advocacy group. “We’ve been living with the scourge of lead contamination in many communities for over 100 years, and once you pull those lead pipes out, they never come back.”

Current federal regulations set a limit of 15 micrograms per liter of lead in drinking water, but health experts have long argued that lead must be eliminated from the water supply.

The science behind tornadoes. The devastating storms that hit six states on December 10 came at the end of a year of extreme weather events. But while scientists have been able to link climate change to hurricanes and droughts, the same cannot be said for tornadoes.

Climate extremes in Australia. Many of the same areas that suffered horrific wildfires in 2019 and 2020 are now experiencing massive rainfall that can leave some people stranded for weeks.

“The science in charge is settled,” Michael Regan, the administrator of the EPA, said in a statement. “There is no safe level of exposure and it is time to eliminate this risk to support thriving people and vibrant communities.”

The EPA did not specify when a new rule would be proposed, but a senior official said the government hoped to finalize it by 2024. It is also unclear what the new standard will be.

And the agency will enact a series of leading Trump-era policies — despite opposition from environmental groups.

Under the Trump administration, the EPA updated the 1991 lead and copper rule, the primary regulation governing lead in drinking water, for the first time in nearly three decades. But the agency rejected the advice of top medical and scientific experts to demand the replacement of all lead pipes and service lines.

Instead, under President Donald J. Trump, the EPA more than doubled the amount of time utilities were given to replace polluted water systems. The Natural Resources Defense Council has filed a lawsuit to prevent these changes from taking effect, calling them “weak and illegal.”

But Biden officials, speaking to reporters Wednesday night, said the Trump administration’s rules include some key steps — such as requiring water companies to identify and publicly report the locations of all their lead service pipes. That’s moving forward now, starting right away.