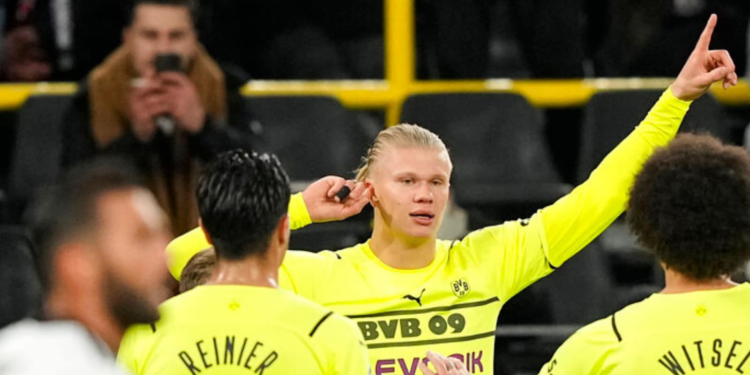 Meeting a passionate character like Erling Haaland at the wrong time can easily become a challenge. One receives an answer in a slightly cranky tone or is greeted with a stony silence. The Norwegian striker is far from an unfriendly person, but the 21-year-old seems to be having his moments.

The minutes after Borussia Dortmund’s last Champions League game 2021/2022 may have been one such occasion.

In the Black and Yellows locker room, it became clear that the spearhead was stuck in a state of turmoil. Despite scoring two goals to secure Borussia’s 5-0 win over Besiktas, Haaland and his club had to accept their early group exit.

Future goals to be scored in the Europa League – 23 goals in 19 Champions League games and 72 goals in 71 competitive games in Dortmund’s first failed to improve the attacker’s mood.

“I just saw him in the dressing room. He appeared in a disgruntled mood; he didn’t seem happy with his performance,” said Dortmund coach Marco Rose.

The departure from the Champions League does not only mean a major setback for the club. It’s far from a risky bet that it will significantly affect Haaland’s future plans.

Club CEO Hans-Joachim Watzke seems aware of what’s next in the stunning story of one of Europe’s most wanted attackers. “I expect talks in the coming weeks. We hope to find out more about his plans before March or April,” said the 62-year-old.

Dortmund is preparing for the departure of Haaland as the Norwegian can count on an exit clause worth 75 million euros next summer.

Rumors speak of Real, United or Liverpool as possible new targets for the young striker. His current club, meanwhile, is on track to replace their irreplaceable striker. Media reports speak of RB Salzburg’s 19-year-old Karim Adeyemi as the most likely solution. The German international is said to have recently rejected an offer from Barcelona, ​​Xinhua reports.

Atlético, Inter, Bayern and Paris are said to have joined the battle for the promising striker. “As the number of denials increases, our chances can grow,” Watzke said.

Meanwhile, Haaland’s future vote could decide Dortmund’s remaining goals. Despite losing the German Clásico 3-2 to Bayern Munich, the Black and Yellows have not given up on this season’s national title race.

Watzke demanded to invest everything to deliver a satisfactory performance in the Euro League. “This is a title that this club is missing,” said the official.

Watzke reminded his players of the 2011/2012 season. Dortmund suffered an early elimination from the Champions League, but still managed to win the league title and the German Cup.

Watzke demanded to turn the bad feelings about the Champions League into positive energy.

Head coach Rose is convinced there’s a lot more to come from Haaland until he possibly leaves. “He is completely fit and he wants to keep scoring goals. He is full of energy and determination,” said the coach.