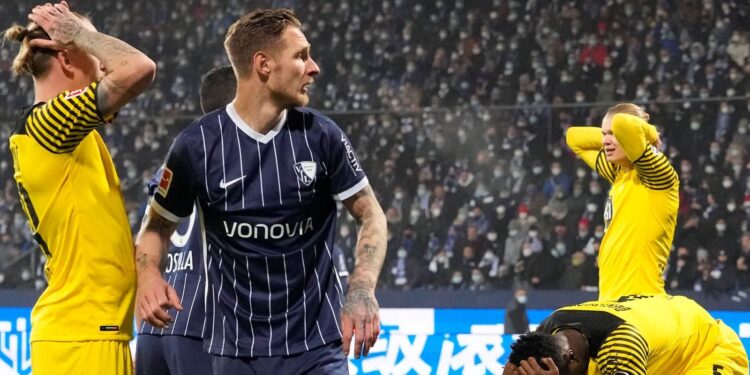 Borussia Dortmund needed an equalizer from Julian Brandt in the 85th minute, despite dominating the entire time, to save a point in a 1-1 draw over newly promoted VfL Bochum on Saturday, when they were six points behind Bundesliga leader Bayern Munich fell.

Brandt took a fully deserved leveler after Bochum took the lead in the 40th minute with a penalty from Sebastian Polter.

Dortmund, in second place, with suspended coach Marco Rose in the stands, avoided a second loss in a row, but fell further behind in the title race at 31 points with Bayern at 37.

Bayer Leverkusen, third on 27, travels to Eintracht Frankfurt on Sunday. Bochum is 10th on 20 points.

,,We had enough good chances to win this game”, said goalscorer Brandt. ,,But if you don’t use it, you only have one point at the end of the game.

“Not scoring was not just bad luck. You have to want to score and we had enough chances, but we weren’t precise enough,” he added.

Dortmund had a strong start and Jude Bellingham missed a golden opportunity to give his team the lead when he only had to beat Manuel Riemann, but the goalkeeper’s shot went wide with a reflex save.

Moments later, Erling Haaland was rejected by Riemann, while Bochum went into battle in their mini derby in the Ruhr.

Despite the pressure, it was the hosts who scored first, with Polter’s well-taken penalty after Dortmund goalkeeper Gregor Kobel knocked down Christopher Antwi-Adjei in the penalty area.

The hosts, who lost 3-2 at home to Bayern last week, shot out of the blocks after the break and chopped away chance after chance.

Marius Wolf thought he had scored the equalizer in the 53rd, but was ruled out by a VAR assessment for offside.

Bochum desperately held on to their narrow lead over Dortmund in the 85th minute, having fired 21 shots on target compared to the hosts’ three.

The visitors were eventually rewarded with their 22nd shot on goal when Norwegian striker Haaland fed Germany international Brandt who scored from a tight corner.