Can Germany’s new Chancellor breathe new life into the left of Europe? 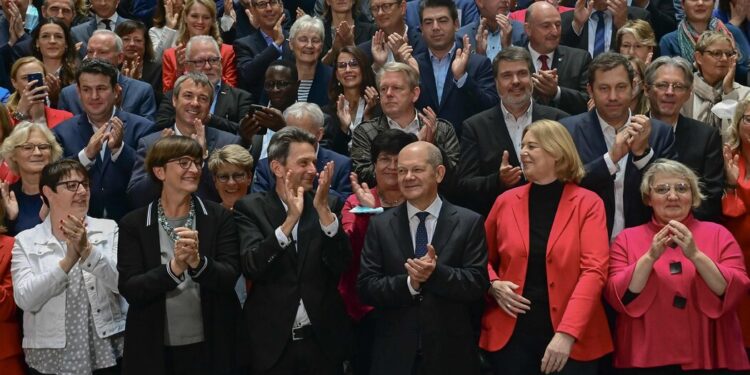 BERLIN — Last December, Olaf Scholz interrupted his campaign preparations for a video call with an American philosopher while planning what most saw as a hopeless bid to become Germany’s next chancellor.

Mr. Scholz, a Social Democrat, wanted to talk to Harvard philosopher Prof. Michael J. Sandel about why center-left parties like his had lost working-class voters to populists, and the two men spent an hour discussing a seemingly simple topic. that would become the centerpiece of the Scholz campaign: ‘Respect’.

On Wednesday, Mr Scholz will be sworn in as Germany’s ninth post-war chancellor — and the first Social Democrat in 16 years — to succeed Angela Merkel and head a three-party coalition government. Defying polls and experts, he led his 158-year-old party from the abyss of irrelevance to an unlikely victory – and now wants to show that the center left can once again become a political force in Europe.

Mr Scholz won for many reasons, not least because he convinced voters that he was closest to Ms Merkel, but his message of respect also resonated. For the first time since 2005, the Social Democrats became the strongest party among the working class. Just over 800,000 voters who had left the far left and far right parties returned in the last election.

“Scholz touched a nerve,” said Jutta Allmendinger, chair of the WZB Berlin Social Science Center research institute and an inequality expert who has known Mr Scholz for nearly two decades. “Many see him as a Merkel clone,” she noted. “But he’s a social democrat at heart.”

Mr Scholz was finance minister in Ms Merkel’s conservative-led coalition government and has promised continuity and stability. But he also plans to turn Germany into a sort of political laboratory, to try and restore the bridge between the Social Democrats and the working class, an effort that parallels President Biden’s political agenda in the United States.

For the center left in Europe, the victory comes from Mr. Scholz at a critical moment. In the past decade, many of the parties that once dominated European politics have become obsolete, seemingly devoid of ideas and largely abandoned by their working class.

The political energy was on the right, especially the populist far right, with many American conservatives flocking to countries like Hungary to study the “illiberal democracy” of Viktor Orban, that country’s far-right prime minister.

“Everyone is looking at us,” said Wolfgang Schmidt, Mr Scholz’s longtime adviser whom he has chosen to face. the chancery. “If we do well, we have a real chance. We must not make mistakes, we must not disappoint expectations.”

In her last years in office, Ms Merkel, a conservative, was sometimes considered the sole defender of liberal democracy in an era of global strongmen, be it President Vladimir V. Putin of Russia or President Donald J. Trump. Still, Germany was not immune to populist anger, and the Alternative for Germany, or AfD, won seats in parliament and became a political force in the east of the country.

“The biggest concern in politics for me is that our liberal democracies are coming under increasing pressure,” Mr Scholz said of himself on the Social Democrats’ website. “We have to solve the problems so that the cheap slogans of the populists don’t catch on.”

Mr. Scholz has traveled extensively in the United States, including in the years leading up to the 2016 election. One of his advisers recalled that he even predicted a Trump victory in a private conversation. He then spent months analyzing why the Democrats lost and reading a slew of books by working-class authors in the United States, France and Germany.

“He studied very carefully what was happening in the United States,” said Cem Özdemir, a leading member of the Greens and a minister in Mr Scholz’s incoming government. “He studied Democrat losses in the US. Why didn’t Hillary win?”

When Mr Scholz’s own party collapsed in the 2017 election, losing for the fourth time in a row, he wrote a brutal paper concluding that one of the reasons the Social Democrats lost their key voters was because they weren’t there. succeeded in offering them “recognition”.

Last year, in the midst of the first Covid-19 lockdown, Mr. Scholz read Professor Sandel’s latest book, “The Tiranny of Merit,” in which the Harvard philosopher argued that the meritocratic narrative of education as an engine of social mobility held a grudge. fueled and contributed to the rise of populists such as Mr. Trump.

“The backlash of 2016 clearly showed that people simply saying, ‘You can do it if you try’ was not an adequate response to the wage stagnation and job losses caused by globalization,” Professor Sandel said in an interview. “What the Social Democratic elites lacked was the insult implicit in this response to inequality, because what it said was, ‘If you struggle in the new economy, your failure is your fault.’”

During Germany’s last Social Democratic government, the Chancellor, Gerhard Schröder, cut benefits and implemented a painful labor market reform between 2003 and 2005 in an effort to reduce the number of unemployed who had passed the five million mark. Mr Scholz, then the party’s general secretary, became the public face of the changes.

Unemployment fell gradually, but the program also helped create a sprawling low-wage sector and prompted many working-class voters to switch from the Social Democrats.

The post-Merkel era begins. For the first time in 16 years, Germany will have a center-left government and a new chancellor, Olaf Scholz, whose job will be to fill Angela Merkel’s shoes. Here’s what you need to know about the new government:

Who is Olaf Scholz? A lifelong Social Democrat, Mr Scholz, 63, is a familiar face in German politics and has served in two governments led by Mrs Merkel’s Christian Democrat party, most recently as its finance minister. But he’s also been something of a political chameleon.

An unusual coalition. The new government led by Mr. Scholz unites three parties: the social democrats, the environmentalists Greens and the business free democrats. It is the first time since the 1950s that three partners form a government.

The reigning deal. Despite their differences, the parties said they had found enough agreement to move forward with plans to curb the pandemic, raise the minimum wage, tackle climate change and legalize marijuana.

The pandemic provides a crucial test. A spike in the number of cases has plunged Germany into the worst crisis of the pandemic, putting the issue at the top of the coalition’s agenda. But in its first test, the incoming government sent mixed signals before the latest wave forced a pullback on tougher measures.

Crises in foreign policy await. Rarely has a German leader taken office with so many burning crises. Mr Scholz will face tensions on the Polish-Belarusian border, a Russian president mobilizing troops near Ukraine, a more confrontational China and a less reliable US.

Professor Sandel argues that it was around this time that center-left parties, including President Bill Clinton’s Democrats, embraced the market triumphalism of the right, identified more closely with the values ​​and interests of the educated and began to lose touch with working-class voters. .

Mr. Scholz, once an ardent young socialist who joined his party as a teenager, championed workers as a labor lawyer in the 1970s, before gradually degenerating into a post-ideological centrist. Today, he is considered the right-wing of much of the party’s grassroots ranks, no different from Mr Biden, whom he is sometimes compared to, although, like Mr Biden, he has shown some liberal reflexes.

“He was an idealist in his youth and then became a technocrat and even a hyper-technocrat, but I think he will become more radical in later life,” said Kevin Kühnert, a prominent figure on the left of the Social Democrats. wing who is the party’s new secretary general.

During the pandemic, Mr Scholz, then finance minister, impressed leftist critics when he unleashed hundreds of billions of euros in state aid to help ailing workers and companies. The pandemic, in turn, highlighted how those suddenly considered essential — nurses and social workers, as well as garbage collectors, supermarket cashiers and delivery guys — often don’t earn much.

“The pandemic has shown on whose shoulders our society is built, who are working hard and are not yet benefiting enough from an economic upturn,” Mr Scholz told reporters during the campaign trail.

Mr Scholz will now lead a three-party government with the progressive Greens and the libertarian Free Democrats. Their government treaty calls for the minimum wage to be raised to $12, or about $13.50 an hour, from $9.60 today – an immediate pay rise for some 10 million people. Mr Scholz has also pledged to build 400,000 houses a year, 100,000 more than previously planned, and to ensure stable pension levels.

More abstract, but equally important, is his promise of a new “industrial revolution” that will aim to make Germany a productive power for the carbon-neutral era and provide the economic foundation for the welfare state of the future.

“We need to tell people two things,” said Mr. Scholz during the campaign. “First, that we need respect, we need good pay and good recognition for work. And secondly, we have to make sure there are good jobs in the future.”

Across the European Union, Social Democrats rule in nine of the 27 member states, and the lessons from Germany are already proving influential. In France, the socialist mayor of Paris, Anne Hidalgo, who recently announced her own much-anticipated presidential bid, evoked the theme of “respect”.

But slogans only go so far. The Social Democrats came in first in Germany’s split vote in September, but rallied only 26 percent of the total, far from the 40 percent they recorded at the start of Mr Schröder’s first term in office. Mr Kühnert, the party’s general secretary, said Mr Scholz’s challenge is to show that the social democratic model is the right approach for the country and beyond.

“We hope that our election victory in Germany will be a signal for the revival of social democracy internationally,” said Mr Kühnert. “We mainly look at the rest of Europe. Because we have to strengthen the EU in the coming years if we want to have a say in the world in the coming years.”