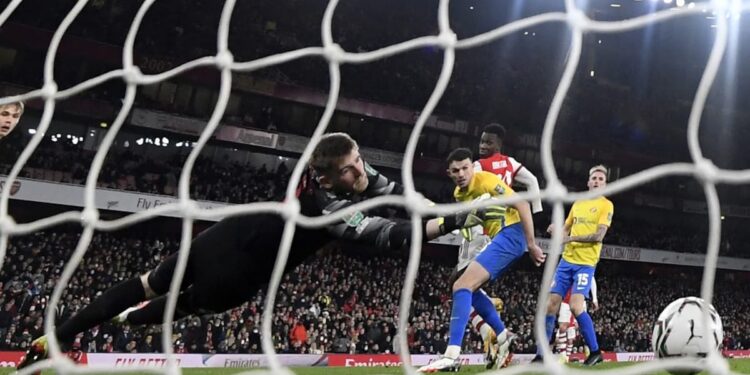 Arsenal maintained their form in the Carabao Cup, winning 5-1 in the quarter-final against Sunderland at the Emirates Stadium on Wednesday. Aside from the easy win, Mikel Arteta had plenty of positives to look at with Eddie Nketiah’s hat-trick, Simone Pepe scoring a goal and teenage prodigy Charlie Patino scoring on his first team debut. Striker Nketiah once again reminded Arsenal fans that he must be given a chance to cement his place in the playing XI with a stunning goal on the heels. It wasn’t just the finish that stunned the fans, but the whole build-up that contributed to the goal.

With 58 minutes played, Martin Odegaard split the opponent’s defense with a great through ball for Pepe who found himself on the right touchline. The silky winger tricked a defender before sending a low cross to Nketiah, who converted it with an icy heel finish.

Arteta has made many changes to his playing XI before the encounter with Sunderland. Regular starters such as Thomas Partey, Gabriel, Bukayo Saka, Alexandre Lacazette, Aaron Ramsdale, Granit Xhaka and Gabriel Martinelli were placed on the bench.

Meanwhile, Bernd Leno had the chance to increase his minutes this season after losing the goalkeeper spot to Ramsdale. Younger Florian Balogun also started on the left wing while Cedric also played as a right back.

Arsenal will face Norwich City in their next game on Sunday in the Premier League. The Gunners hope to build on their good form and strengthen their challenge for a spot in the UEFA Champions League.