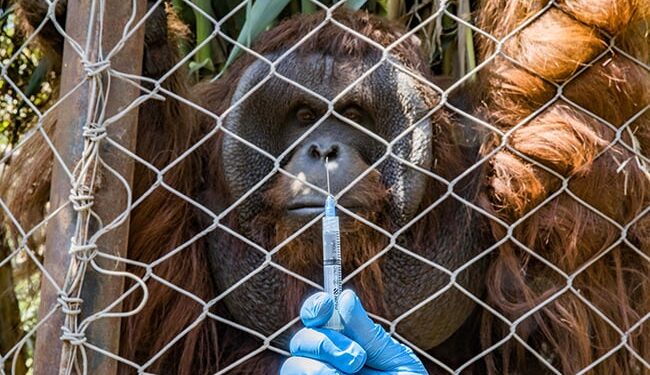 Chile is the only country in Latin America to have started vaccinating zoo animals.

Bengal tiger Charly and Bornean orangutan Sandai, both members of endangered species, have received coronavirus vaccines at a Chilean zoo in a Latin American first.

Charly, Sandai and eight other animals at the Buin Zoo in Santiago were chosen for the experimental vaccine campaign because they belong to species believed to be at high risk for contracting Covid-19.

The viral disease that has killed more than 5.4 million people to date has also been found in zoo monkeys, great apes and big cats, as well as in wild deer, pets and minks.

Along with three lions, two other tigers and three cougars, three-year-old Charly and Sandai, 26, received their second dose of an experimental vaccine developed specifically for animals but not yet available for sale on Monday.

On December 13, they received their first injections.

“The idea is to protect the animals most prone to contracting the coronavirus, while testing whether the vaccines generate immunity and, if so, how long it takes,” said Sebastian Celis, head of the veterinary department at the Buin Zoo.

Lions in Singapore, Zagreb and Washington, hippos in Belgium, Sumatran tigers in Indonesia and gorillas in Atlanta, Georgia are among the captive animals that have contracted the virus so far.

Buin Zoo has not tested any of its animals for coronavirus, as none of them showed any symptoms.

Several US zoos have announced vaccination campaigns for their animal populations.

Nearly 90 percent of the Chilean human population over the age of three has so far been fully vaccinated, and 62 percent have received a booster vaccination.

It is the only country in Latin America to have started vaccinating zoo animals.