Covid vaccines rarely cause problems in younger children, according to two CDC reports. 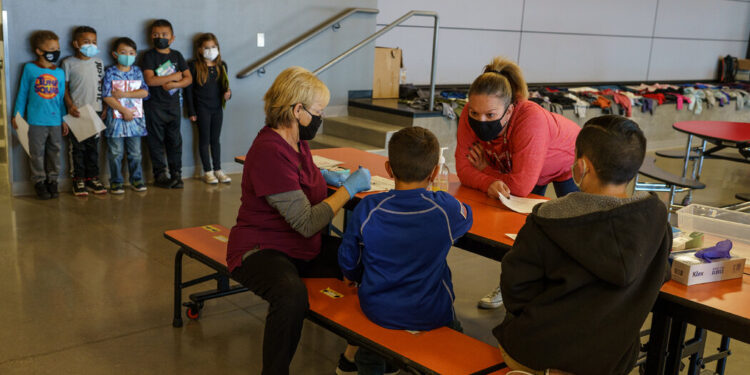 The Centers for Disease Control and Prevention released two studies on Thursday highlighting the importance of vaccinating children against the coronavirus.

One study found that serious problems in children ages 5 to 11 who received the Pfizer-BioNTech vaccine were extremely rare. The other, who looked at hundreds of pediatric hospital admissions in six cities last summer, found that nearly all children who became seriously ill had not been fully vaccinated.

In the United States, more than eight million doses of the Pfizer vaccine have been given to children ages 5 to 11 to date. But concerns about the obscurity of a new vaccine made some parents hesitant to get their kids vaccinated, including those who said they’d rather wait for the wider rollout to surface rare issues.

On Dec. 19, about six weeks into the campaign to vaccinate 5- to 11-year-olds, the CDC said it had received very few reports of serious problems. The agency reviewed reports from doctors and members of the public, as well as survey responses from the parents or guardians of about 43,000 children in that age group.

But reports of myocarditis, an inflammation of the heart muscle that has been linked in rare cases to coronavirus vaccines, remained scarce. The CDC said 11 verified reports had come in from doctors, vaccine manufacturers or other members of the public. Of those, seven children had recovered and four were recovering at the time of the report, the CDC said.

The CDC said the reporting rates for vaccine-related myocarditis appeared to be highest among boys and men ages 12 to 29.

A number of parents or doctors also reported cases of 5- to 11-year-olds receiving the wrong, larger vaccine dose intended for older children and adults. The CDC said those problems were “not unexpected” and that most such reports stated that the children experienced no problems afterward.

The CDC detailed two reports of deaths, among girls, ages 5 and 6, who had chronic medical conditions and were in “fragile health” before being shot, the agency said. “The initial review found no data suggesting a causal relationship between death and vaccination,” the agency said.

The CDC’s separate report on pediatric hospitalizations provided additional evidence about the importance of vaccinating all eligible children. The study, which looked at more than 700 children under the age of 18 admitted to hospitals with Covid-19 last summer, found that 0.4 percent of the children eligible for the injections had been fully vaccinated.

The study also found that two-thirds of all children hospitalized had a co-morbid condition, most often obese, and that about one-third of children 5 years and older were ill with more than one viral infection.

In all, nearly a third of the children were so sick that they had to be treated in intensive care, and almost 15 percent needed medical ventilators. Of all those hospitalized, 1.5 percent of the children died, the study found. The six hospitals were in Arkansas, Florida, Illinois, Louisiana, Texas and Washington, DC

“This study shows that unvaccinated children hospitalized for Covid-19 can experience serious illness and reinforces the importance of vaccinating all eligible children to provide individual protection and to protect those who are not yet vaccinated. eligible to be vaccinated,” the study authors wrote. .