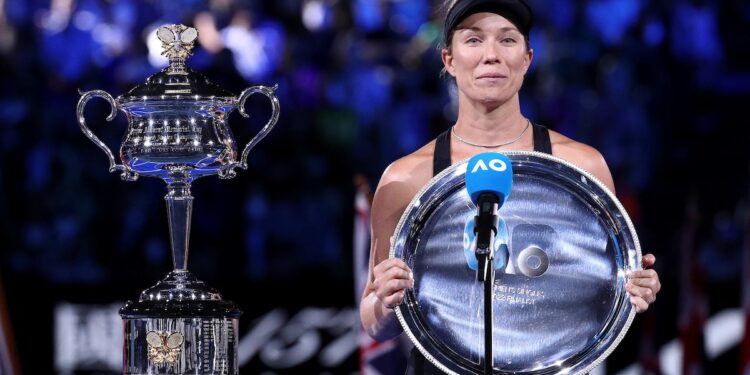 Danielle Collins says she will “walk away proud” after hard-challenging world number one Ashleigh Barty in her first Grand Slam final at the Australian Open on Saturday. The 27th seeded American was a huge underdog against the league leader, but unexpectedly drove 5-1 clear in the second set and seemed destined to conclude the championship game. But Barty somehow fought back, playing four games in a row to force a tiebreak and win 6-3, 7-6 (7/2) to dismiss the 28-year-old. “Not the result I wanted of course, but I did my best. I did everything I could. I was pushed to the limit and I finally gave myself a chance there,” she said.

“Unfortunately it didn’t go the way I wanted, but I did everything I could, and that’s all you can do at the end of the day.”

Despite the loss, the action-packed American will break into the top 10 for the first time when the new rankings are released next week.

Her run in Melbourne marked a remarkable career turn since emergency surgery last year for endometriosis – in which the tissue that lines the uterus grows outside it.

It took debilitating pain and she won her first two WTA titles and made a first Grand Slam final since going under the knife.

And Collins has accomplished a lot of this without a coach.

“I really need to start coaching myself. I think I went in with the right game plan. I did everything I could, but unfortunately there were a few things that just didn’t work for me,” she said.

“That’s technically very difficult if you’re not in a good place physically to get yourself to do those things.

“Today my body didn’t always agree with me and I had a bit of a fight with my body, which is to be expected when you go that far in a tournament.

“You know, I think my assessment was pretty good overall. I think there are some areas I need to improve. I can definitely walk away proudly without having a coach and do it a little bit on my own.”

Collins has been at her best in the past two weeks, winning consecutive games from a set-down — against Clara Tauson and Elise Mertens — for the first time at a major.

She was then merciless in the defeats of Alize Cornet and seventh seed Iga Swiatek, with her intense focus on strength and fitness in the off-season paying off.