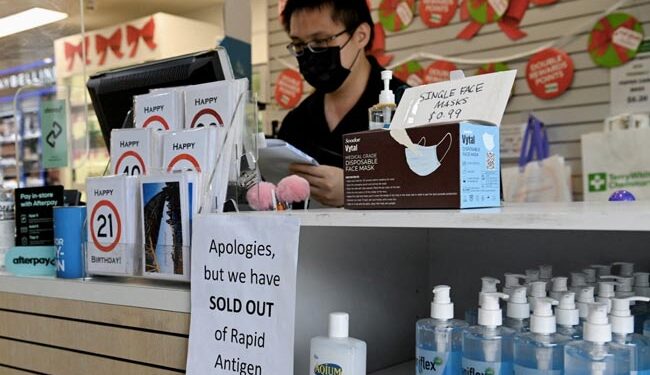 Australia experienced the deadliest day of the pandemic on Tuesday as a fast-moving Omicron outbreak continued to push hospital admissions to record levels, even as daily infections eased slightly.

Australia is facing the worst COVID-19 outbreak, fueled by the Omicron strain of the coronavirus, which has sent more people into hospitals and intensive care units than ever during the pandemic.

As of late morning, a total of 74 deaths were recorded between New South Wales, Victoria and Queensland, Australia’s three most populous states, surpassing the previous national record of 57 last Thursday, official data shows.

“Today is a very difficult day for our state,” New South Wales Prime Minister Dominic Perrottet said at a media briefing as the state reported 36 deaths, a new pandemic high.

Perrottet, who has consistently ruled out hard thresholds due to high vaccination levels, said hospitals can still handle the rising number of admissions. “Despite the challenges, they are not unique to the rest of the world,” he said.

Amid rising hospital admissions, Victoria on Tuesday declared a “code brown” in hospitals, usually reserved for shorter-term emergencies, that would give hospitals the power to cancel non-emergency health services and cancel staff leave.

Authorities have said unvaccinated young people make up a “significant number” of hospital admissions in the country.

Omicron has also tarnished Prime Minister Scott Morrison’s approval ratings, according to a widely viewed poll on Tuesday, putting opposition Labor in a leading position months after a federal election.

Just over 67,000 new infections were reported in New South Wales, Victoria, Queensland and Tasmania, up from a national record of 150,000 last Thursday. Other states will report later.

Australia has reported about 1.6 million infections since the start of the pandemic, with about 1.3 million in the past two weeks. The total number of deaths was 2,757.