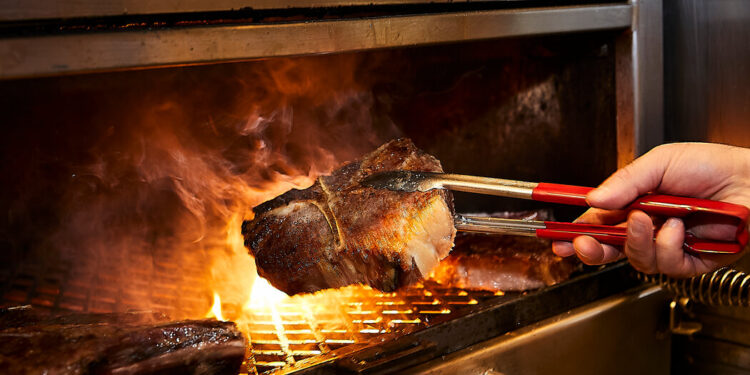 For almost two years now, traveling to enjoy delicious meals in other countries has been inadvisable or difficult if not completely impossible. Hawksmoor, a popular British group of nine steakhouses based in London, finally did something about the situation. Since September, a 10th Hawksmoor, on East 22nd Street, has been standing by to serve Americans following the State Department’s warning not to travel to Britain.

I’m all for international diplomacy, especially when it starts with a few cocktails. But if I was asked which of all the restaurants from other countries would be the best addition to New York’s food scene, I’m not sure I would choose an English steakhouse exactly.

When the first Hawksmoor opened in Shoreditch in London’s East End in 2006, critic Jay Rayner wrote in The Guardian that it had filled a long-standing void in Britain for “the kind of steak so readily available in the U.S. Hawksmoor looked the part too, he thought, “down to the Manhattan-esque white wall and bare brick interior.”

I wondered if this was unfair when I saw the dining room. A former auditorium built in a high-rise neoclassical style in the late 1800s to serve the social charities who were the building’s original tenants, has been given a slightly Anglicised, club-like appearance with parquet floors, charcoal-blue walls and emerald leather benches. It’s like no other steakhouse in New York.

And when I tried the steaks I was sure I was wrong. They arrive alarmingly naked, without a sprig of parsley. They are black and ragged and look like they were accidentally left in the oven overnight. Cut them in, though, and the flesh inside is a warm, iron-rich red.

The fillet, the size and oddly shaped like a fist, didn’t have that weird tuna-like tenderness some people expect, but it was tender enough and for once it tasted undeniably like beef.

The rump steak delivered everything you want from that cut, i.e. densely packed flavor in exchange for a modest amount of chew and a relatively small amount ($28 for 10 ounces, the cheapest steak in the house).

These two were ordered straight from the menu. One of Hawksmoor’s biggest attractions, however, is the practice of writing the names and weights of other, larger pieces available that day, on blackboards hung in the dining room. These range from giant rugby teammates, such as a 54-ounce rib chop, to the last meal of condemned inmates, such as a 38-ounce castle briand, to slabs of meat you could potentially eat by or take the next day off to like a python lying very quietly on the couch.

The smaller steaks are often scraped from the plate early in the evening. One night I was in time to get a 16-ounce sirloin steak grilled on the bone. Under a glistening last minute application of Maldon salt, it was almost as tender as the fillet, approaching the hard minerality of the rump steak in flavor.

In fact, the steaks that Hawksmoor serves are not that readily available at steakhouses in the United States. First, the restaurant grills on charcoal. This is what you could do in the backyard, but not what happens in most American steakhouse kitchens, where broiler chickens are standard. A small note of smoke lingers in the dark outer crust. Roasted steaks, even savagely charred, can taste antiseptic by comparison.

The main difference is in the meat itself, which the restaurant says comes from cattle fed exclusively on pastures and hay on small family farms. According to the Hawksmoor website, these animals lead “stress-free lives,” which is more than most of us can say today. The full, direct flavor of the steaks at Hawksmoor is built into the meat, while much of the flavor and texture of typical steakhouse beef comes from the melting of the extra fat the animals pack on during their final grain-fed weeks.

Since even the more marbled cuts of grass-fed beef are relatively lean, you may want to pay five or six dollars extra for a dish with sauce. The pepper sauce is curiously unspiced, but the anchovy hollandaise is so good that I started looking for other things that could be dipped in it – the lean beef fat fries, the thick and crispy chips cooked three times in accordance with the teachings of Heston Blumenthal, the carrots the size of a chewing gum in a mustard-cider glaze and finally a spoon. My fingers would have been next, but just then the table had been cleared.

The sides break with our local customs by letting British ideas creep in. An ungrilled steak, a fillet seared in cast iron, is served with a slightly lighter version of Scotland’s savory oatmeal preparation known as skirlie. Two fine, hollow Yorkshire puddings accompany a pot of steak-and-bacon rillettes.

None of the sides are as appealing as the steaks themselves, and a few of the browner items, like the lukewarm bone marrow-onion “gravy” served with the rillettes, seem to have lost their zing during the transatlantic journey.

Seafood is more energetic: the charcoal-roasted half or whole lobster in herb butter; the slices of raw trout the color of peach sorbet, in a ceviche-like dressing; and, best of all, the Massachusetts oysters with a Scotch bonnet mignonette.

On the studious and oddly organized cocktail list, so-called Hawksmoor Classics mingle with alcoholic and non-alcoholic tributes to New York. The wine list has its own ideas of what to drink with beef beyond the stiff and self-important Cabernets that most New York steakhouses still push, though too few bottles are priced under $75.

Desserts, under the practiced hand of Carla Henriques, rise far above the cliché. The chocolate and hazelnut gâteau that Alain Ducasse prepared for Le Louis XV in Monaco is being injected with peanut butter; I don’t know if it’s necessary, but it certainly can’t hurt. Break open the spectacular meringue snowball encasing the Meyer lemon meringue bomb and you’ll find a scoop of clotted cream ice cream with a ripple of lemon curd. And if you’re still not convinced you’ve left the land of cheesecake and schlag, the exemplary sticky toffee pudding should do the trick.