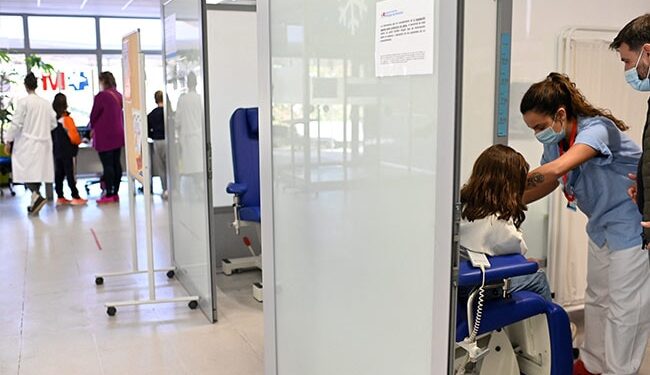 Europe on Wednesday stepped up the vaccinations of children aged five to 11 against Covid-19 as the EU health agency warned that immunization alone would not stop the rapid rise of the Omicron variant of the virus.

Croatia, Germany, Greece, Hungary and Spain were among those to open their vaccination drive to younger children, while other countries are still weighing their approaches.

At Hospital Principe de Asturias in Alcala de Henares near Madrid, nurses wearing Christmas antler headbands welcomed the children and gave them stickers after their shots.

“It only hurt a little,” 11-year-old Magdalena Lazo Vitoria said as she left the vaccination center, with a bandage on her left shoulder.

“I wasn’t nervous because I’ve wanted to get vaccinated for a long time, so I’m very happy.”

The boost was given new urgency with the rapid spread of the heavily mutated Omicron variant, which EU chief Ursula von der Leyen warned could dominate Europe by mid-January.

Even as children queued to get shots, the EU health agency ECDC said measures such as wearing masks, working remotely and avoiding crowds were essential to reduce the strain on healthcare systems within the time available as vaccines just take too long.

Spanish Prime Minister Pedro Sanchez said he hoped his country, which already has one of Europe’s highest Covid-19 vaccination rates, would become “an example to the world” with its immunization campaign for five- to 11-year-olds.

The country has about 3.3 million children in that age group.

“As soon as we offered the vaccine appointments, almost all of them were picked up,” said Jakob Maske, a Berlin-based physician and spokesperson for the German Association of Pediatricians.

The German STIKO Vaccination Commission has officially recommended the shot only for children with pre-existing conditions, but even healthy children will be vaccinated if the parents request it.

Some German cities are planning to administer child shots in museums and zoos, while others are considering mobile vaccination teams outside of schools.

But like other countries, Germany is also grappling with anti-vaccination militancy, and on Wednesday saw police raids in the eastern city of Dresden over death threats against Saxony’s pro-vaccine prime minister Michael Kretschmer.

While serious illness and death from Covid in children is rare, those infected can pass the virus on to other people at higher risk of serious illness, such as the elderly.

The EU’s drug watchdog last month approved the Pfizer-BioNTech injection for five to 11-year-olds, an age group facing high levels of coronavirus infections across the continent.

The vaccine is administered at a lower dose than the Pfizer shot for over 12 years and comes in a pediatric vial with an orange cap to distinguish it from the purple cap for older ages.

Denmark, where the number of cases attributed to the new Omicron variant has risen, and some Austrian regions have already started offering shots to younger children in November.

The United States was the first major country to take the plunge, and has so far vaccinated more than five million children, ages 5-11.

The push to vaccinate children comes as several European countries tighten virus restrictions, with Poland imposing limits on the number of people allowed in restaurants, hotels and theatres.

Italy will tighten restrictions on arrivals from the rest of the EU from Thursday, requiring coronavirus tests for all travelers, while Greece announced a similar measure to take effect from Sunday.

A number of European countries will launch childhood vaccination campaigns in the coming days, including Italy, Portugal, Poland, the Baltic States and the Czech Republic, while others are still finalizing their plans.

In France, vaccination is only approved for 5 to 11-year-olds at risk of serious illness, but the government has said it is considering extending it to all children on a voluntary basis.

Belgium is awaiting the recommendation of its national health authority, with a rollout likely around the new year.

UK regulators are still assessing whether to approve jabs for the 5-11 age group, with a decision likely before Christmas.