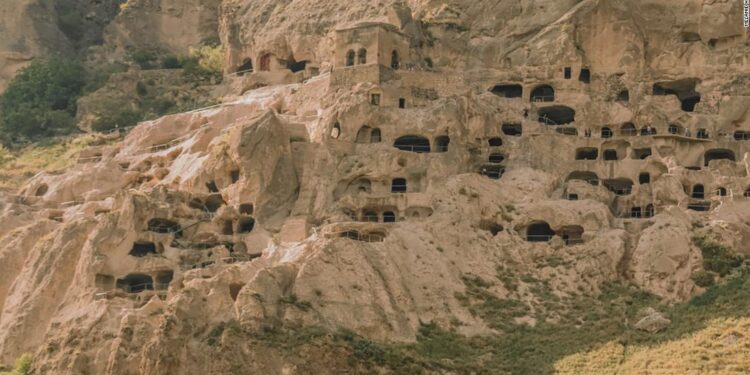 Vardzia, Georgia (DailyExpertNews) — From the 3,000-year-old Uplistikhe to the 6th-century David Gareja Monastery and the long-forgotten homes of Samshvilde, all of Georgia’s caves are awe-inspiring.

Spread across the slopes of Erusheti, Vardzia looms over a lush valley formed by the Mtkvari River, is Georgia’s most remarkable cave city.

In its day, the rock-cut fortress consisted of 6,000 rooms spread over 19 floors, including 25 wine cellars, a nunnery, 15 chapels and a pharmacy, all of which came together to create a vibrant medieval town and monastery.

First conceived and built as a fortress in the 12th century under the reign of King Giorgi III, it was his daughter who really brought it to fruition. Under her watchful eye, an extensive series of caves and chambers were carved deep into Erusheti’s belly, including a secret escape tunnel and a maze of dead ends to confuse enemies.

Over the years, it quickly evolved from a modest fortress to a sprawling monastery, cultural center and offensive stronghold. Vardzia was home to some 2,000 monks, tens of thousands of residents and, thanks to fertile terraces and a complex irrigation system, was a self-sufficient city before that was even a thing.

At the helm was Tamar the Great, a legendary monarch so fierce and powerful that she earned the title of king: Tamar Mepe. During her nearly 30-year reign — married twice and wife no less — Georgia prospered politically and territorially, her rule stretching across the Greater Caucasus and plunging south between modern Ganja and Erzurum.

Literature and art flourished like never before, giving way to some of Georgia’s greatest figures. Namely, Shota Rustaveli, a medieval poet whose unrequited love for Tamar and the epic poem “Knight in the Panther’s Skin” cemented his place in history and earned him an avenue in just about every city in the country.

As prosperous as it was, Vardzia’s success was relatively short-lived. In the year 1283, an earthquake shook the region, destroying more than 70% of the city and causing the outer wall to fall in an avalanche of biblical proportions. Left without a solid defense, most of Vardzia packed up and left, leaving behind only the steadfast monks.

The monastic community lasted for another 300 years until further incursions wiped them out.

More than 800 years after the reign of King Tamar, a handful of monks still care for Vardzia, who returned after the collapse of the Soviet Union.

About 500 caves remain, including a pharmacy with its carefully hewn shelves intact and wine cellars with qvevris (ancient wine-making vats) still embedded as if no time had passed.

Even further up the mountain is the labyrinth of pristine tunnels—some over 600 feet long—linking everything together in an ancient web.

A former dining hall in Vardzia.

Even the weathered dining room with its carved stone benches and oven predominate.

The most striking structure you will encounter is the enormous bell tower that rises above a rock plateau. It has retained most of its original glory, although you will notice one very important missing piece taken during a Mongol raid – the bell.

Most impressive is the Church of the Dormition with its double-vaulted bell-hung portico impossibly carved into the mountainside. Inside are spectacularly weathered frescoes, including one of only four comprising King Tamar.

Visitors will want to hunt for Queen Tamar’s Tears, a natural spring hidden deep within the tunnels and where you’ll find a pool seemingly filled with water flowing – or howling – from the rocks above.

The area also has a lot to offer. Opposite Vardzia is the Vardzia Cavetown viewpoint. As the name suggests, it makes an excellent stop to see everything from afar.

Vanis Kvabebi is several hundred years older than the site and is almost as impressive as Vardzia herself. Avid climbers can climb the ruins via a series of wooden ladders that lead to a small white-domed church and enjoy beautiful views of the valley.

Not far from Vanis Kvabebi is the Tmogvi Fortress. It totters high above the river and is a vast sprawl of ruins comprising a long-forgotten citadel, degraded frescoes and crumbling towers.

On the way back to Tbilisi you will come to a forked road marked by Khertvisi Fortress – a medieval castle perched on a rocky outcrop. A right turn takes you towards Armenia and deeper into Samtskhe-Javakheti.

The Khertvisi Fortress is a medieval castle that sits atop a rocky outcrop.

Vardzia is located in Samtskhe-Javakheti, a region of southern Georgia flanked by Turkey and Armenia with a vibrant tapestry of culture, landscape and cuisine. In the northern half of the region, Borjomi is a densely wooded spa town known for its medicinal springs and bottled mineral waters that, according to local legend, cure even the worst hangovers.

And then there’s Akhaltsikhe, a quiet town dominated by the Rabati Castle, a medieval fortress and symbol of diversity, topped with a mosque, synagogue and Orthodox church.

Tucked into the southeastern corner of the region is Paravani Lake. It is Georgia’s largest lake, surrounded by volcanic mountains and rugged, windswept terrain. On the southern shores is Poka, a hamlet that houses the St. Nino Monastery, a simple monastery closely associated with the legend of St. Nino, a woman who brought Christianity to Georgia, making it the second nation in the world who converted after neighboring Armenia.

On site you will also find a small shop run by the nuns who prepare artisan chocolates, traditional cheeses and even beer made in qvevri.

The region is shaped by its culinary traditions as well as by cultural attractions. Thanks to the influence of different cultures over the centuries, Samtskhe-Javakheti offers a whole range of delicious food.

High in the hills rolling out of Akhaltsikhe is Andriatsminda, a small village where a few local families have preserved the painstaking tradition of tenili, a cheese native to the region known for its angelic hair texture.

Thought to be a vestige of the presence of French priests in the region, you’ll also find lokokina (snails) meant to be enjoyed as a succulent filling for khinkali (dumplings), or plated escargot style.

Other treats include apokhti khinkali made with dried meats such as goose, Meskhuri shoti (Meskhetian bread) and the region’s old favorite tatarberaki – delicate squares of cooked dough smothered in a rich sauce of garlic, onion, butter and yogurt.

Just a little over four hours from Tbilisi, a drive through the dense forests of Borjomi and the fortress-gilded Akhalstikhe brings you in Vardzia.

Choose one of the many enthusiastic drivers at Freedom Square, or get behind the wheel with a rental car. While there are plenty of drivers willing to take a day trip, the area is best explored in a couple of nights so you can really enjoy it.