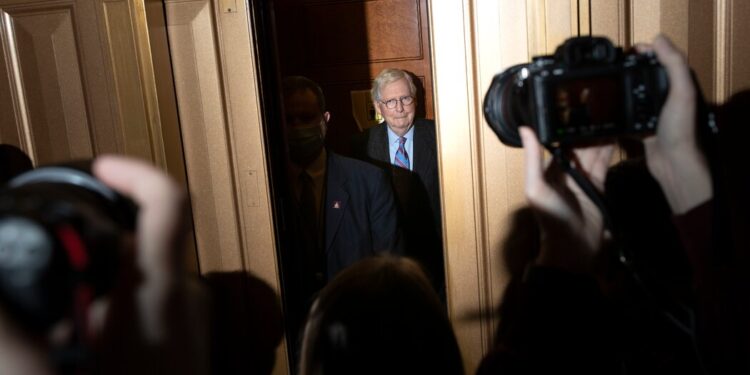 A spokesman for Mr. McConnell also quoted demographic data from the Census Bureau on turnout in the past four federal elections. For example, in the 2020 election, 62.6 percent of eligible black Americans voted, compared to 66.8 percent of all eligible Americans, a difference of 4.2 percentage points. In the 2018, 2016 and 2014 elections, the differences were even smaller, at around 2 percentage points.

So while turnout among black American voters isn’t “as high” as overall turnout, as Mr. McConnell said, it seems comparable across several recent elections.

But the inequality is greater between black and white voters. According to an analysis of Census Bureau data by Michael McDonald, a voter turnout expert at the University of Florida, black Americans have almost always voted at lower rates than white Americans. The exceptions were in 2008 and 2012, when Barack Obama was on the ballot. Those were the only years when black turnout surpassed white turnout.

Overall, though, the 2020 election drew the highest turnout in more than a century. And in a Pew Research Center poll conducted just days after the election, 94 percent of those polled said it had been very or somewhat easy to vote, as Mr McConnell said.

However, the high turnout and the perception that voting was easy in previous elections does not prove that concerns about access to votes in future elections are “misplaced”, as McConnell suggested. At least 19 states have passed laws by 2021 restricting access to votes. Georgia’s efforts, in particular, can have too much of an impact on black voters.

And the high turnout in 2020 was fueled in part by unusually high voter engagement. In a Pew poll conducted in July and August 2020, 83 percent of respondents said it really matters who wins the presidency, the highest percentage to give that answer in the survey’s 20-year history.

“In 2020, more people voted because more people were interested in voting. That’s not a measure of how many people were affected by voting restrictions,” said Wendy Weiser, director of the Democracy Program at the Brennan Center for Justice. “We can’t be satisfied with taking 10 percent of the population because 60 percent of the population showed up.”