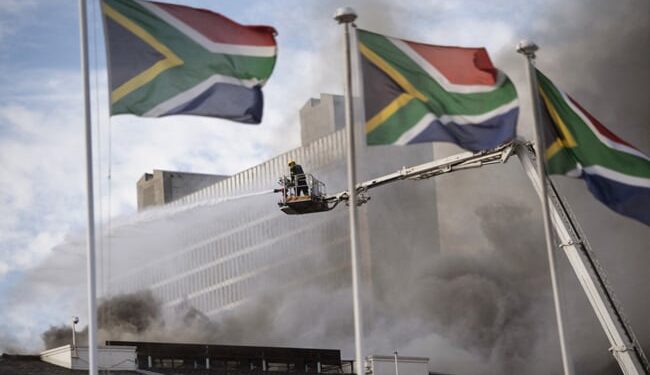 There were no casualties in the fire, but the extensive damage has shocked the country. (File)

South African President Cyril Ramaphosa will deliver the annual state-of-the-nation speech next month from an alternate location in Cape Town after the National Assembly building was destroyed by fire, parliament announced on Friday.

City Hall, which will host the annual event that will bring together the executive, legislature and judiciary on Feb. 10, was where Nelson Mandela addressed the crowd after his 1990 release from prison.

The flagship political rally is traditionally held in the chamber of the National Assembly, but a fire that broke out at the Cape Town-based complex on Sunday severely damaged the building, rendering it unusable.

“The enormous damage has forced the institution to find an alternative venue to host this important event on the parliamentary calendar and in the country,” the parliament said in a statement.

It said Cape Town City Hall provided the infrastructure and capacity to host the flagship event.

“It is also an appropriate place given the historical significance embedded in the minds and hearts of South Africans,” it said.

When Mandela, South Africa’s first black president, addressed the nation and the euphoric crowd after more than 27 years in prison, Ramaphosa stood beside him, microphone in hand.

President Ramaphosa, who was 37 years old when Mandela was released, “will address the nation from City Hall, 32 years since that historic event in 1990,” the parliament said in the statement.

It took more than 70 hours to put out the fire that ripped through the wood-paneled meeting room where parliamentary debates are held.

There were no casualties in the fire, but the extensive damage has shocked the country.

A 49-year-old man, Zandile Christmas Mafe, briefly appeared in court on Tuesday on charges of breaking into parliament, arson and intent to steal property, including laptops and documents. He is due to appear in court again next week.