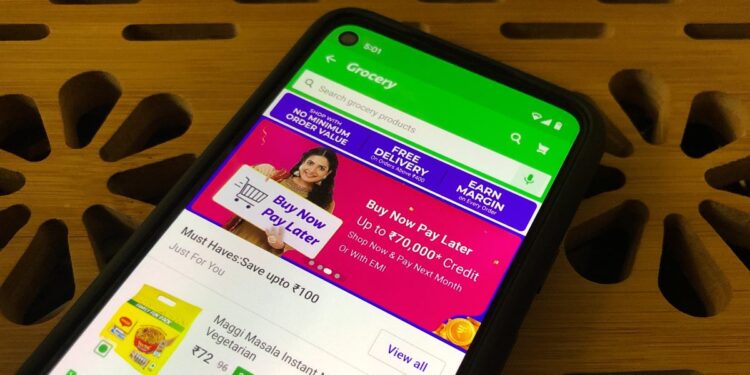 Flipkart’s social commerce app Shopsy added groceries as a category to its platform on Tuesday. Leveraging the e-commerce company’s supply chain infrastructure and technology capabilities, Grocery on Shopsy would serve consumers in 700 cities across more than 5,800 PINs. The new category is also touted to have more than 6,000 products in 230 categories – ranging from staples and fast-moving consumer goods (FMCG) to various other dry groceries. Flipkart will attract users to the platform by offering a fixed commission margin of five percent.

With the new step, Shopsy users can now shop for great value groceries by adding products to their cart and checking out. Users can also combine orders for multiple people in their network and share groceries via social media via the app. This allows them to earn a fixed five percent commission margin that Flipkart promises to be delivered directly to their linked bank account. It is further claimed that customers receive up to 50 percent savings.

“Groceries are a vital consumer need and we are committed to making e-grocery affordable for both consumers and merchants,” said Prakash Sikaria, Senior Vice President – Growth, Flipkart, in a statement. “Over the past few months, we’ve been working to reduce the cost of grocery delivery. We are pleased to announce that we have achieved the best-in-class cost structure, which gives us confidence in scaling groceries on Shopsy.”

Flipkart claims that by introducing the new category, it aims to make Shopsy the largest supermarket chain in the country. The company appears to have plans to take on Google-backed Meesho, Reliance Industries’ JioMart and Tata-invested BigBasket.

Shopsy was launched by Flipkart in July this year as its social commerce platform. At the time of its launch, the company did not consider groceries as a category, although it has now been chosen as a category – given the growing online grocery delivery market in the country.

In late November, Flipkart announced that Shopsy has clocked in four times its sales growth over the holiday season and has grown its user base 3.7 times larger than before. The app, which is currently limited to Android devices, also managed to exceed 10 million downloads on Google Play. All of that growth came mainly from categories such as fashion, beauty, general merchandise and home (BGMH), Flipkart had said.

Flipkart claims to offer a no-commission marketplace model through Shopsy, where local and small businesses and individual entrepreneurs can sell products in their local area and between contacts. The model is similar to how Meesho allows small merchants to sell a variety of small ticket items using social media platforms. It is also different from Flipkart’s original e-commerce platform, where customers buy products from various large-scale retailers.

According to a report by consultancy RedSeer, social trade in India has the potential to touch up to $7 billion (about Rs. 53,100 crore) in gross trade value (GMV) by 2022. There is also speculation that the growth of social trade will open up opportunities for resellers and suppliers in the country in the next five years.