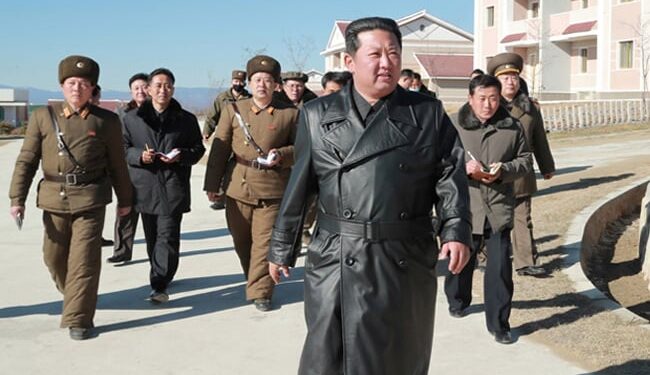 Kim Jong Un focused on food and development during a plenary meeting of the Workers’ Party of Korea.

North Korean leader Kim Jong-un put the economy at the center of an agenda-setting speech at the end of a key ruling party meeting, state media reported Saturday, without mentioning the United States.

Instead of the political stances on diplomacy for which Kim’s New Year statements have been closely watched in recent years, he focused on food and development during a plenary meeting of the Workers’ Party of Korea.

The impoverished, nuclear-armed nation has faced a rigid, self-imposed coronavirus lockdown that has hammered its economy and left it struggling with food shortages.

“Achieving a pioneering step in solving problems related to people’s daily needs was presented as an important task,” the official Korea Central News Agency (KCNA) said in a report on Kim’s speech.

Due to the pandemic and the resulting border closure, the north registered its worst economic contraction in more than two decades in 2020, according to the South Korean central bank.

Concerns have grown about a full-blown food crisis in the country, and a United Nations human rights expert warned in October that the most vulnerable “were at risk of starvation”.

Kim, who took power just over a decade ago after the death of his father Kim Jong Il, said at the party rally that fighting the pandemic was one of the main goals for the coming year.

“Emergency response to epidemics must be a top national priority and implemented vigorously…without even a minor leeway, gap or loophole,” he said, according to KCNA.

Although the leader did not directly mention the United States or South Korea, he briefly said that Pyongyang would continue to build its military capabilities.

“The increasingly unstable military environment on the Korean peninsula and the international situation calls for strengthening national defense capabilities,” Kim said, according to KCNA.

State media gave no details on what that might entail.

Pyongyang is under multiple series of international sanctions for its nuclear and ballistic missile programs, which have progressed rapidly under Kim.

But the deteriorating economic situation during the pandemic has not weakened those programs, and North Korea has continued to develop weapons, a UN report in October said.

Pyongyang has abstained from talks over its nuclear program since the 2019 collapse of the dialogue between Kim and then-US President Donald Trump.