For a composer of 90 there is nothing but time 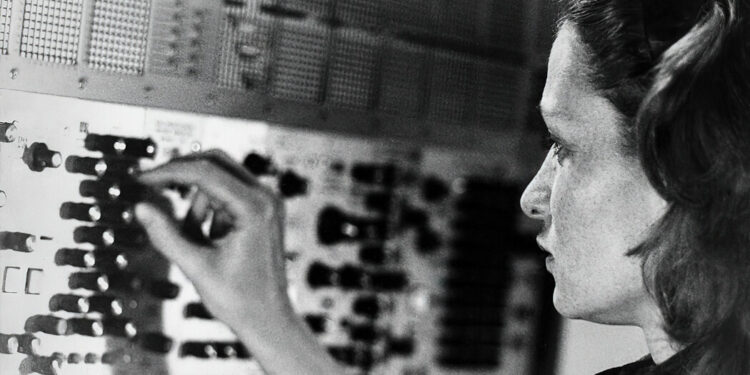 Éliane Radigue lives and works in a second-floor apartment in the Montparnasse district of Paris. A weeping fig tree looms above her head; across the loft-like room are three large windows decorated with houseplants. The windows overlook a school across the street that, she wrote in a recent email, “gives its rhythm to days, weeks, and months.”

She has lived there for the past 50 years and steadfastly writes a lot of slow, very minimal, mainly electronic music. Radigue’s work, who turned 90 on January 24, often seems static at first hearing. Her most famous piece, the Buddhism-inspired ‘Trilogie de la Mort’, lasts three hours and seems grand and empty. But zoom in on the musical material and you’ll see that every line makes its way, no matter how deliberate.

“Time, silence and space are the main factors that shape my music,” she wrote in an interview over a series of emails. “A shivering space, like a soft breath, arouses the vibrations of silence a little and becomes sound.”

She added that “this natural way of working – slowness – naturally takes a lot of time”, and that she works “within time”.

However, her music can feel less inside than outside. In her dedication to growing her ideas organically, she often makes you forget there is time.

Radigue was born in Paris in 1932. She studied piano from an early age and remembers attending classical concerts on Saturday afternoons. But while the spirit of slow symphonic movements lingers in her work, such a style rarely emerges explicitly; the opening of ‘Opus 17’, in which she gradually deconstructs a phrase from Chopin, is an outlier. Most of her other nods to the standard history of classical music – as in ‘Kyema’ from the ‘Trilogy’ and half an hour in ‘L’Île Re-Sonante’ – appear vague, like a stranger on the road whose cries are lost in the wind.

More than music itself was the sound that spoke to Radigue. In the mid-1950s, she lived with her young family next to an airport in Nice. While listening to planes flying overhead, she heard for the first time a radio broadcast of Pierre Schaeffer’s ‘Étude aux Chemins de Fer’, a sound collage based on recordings of trains that formed the first part of Schaeffer’s groundbreaking ‘Cinq Études de Bruits’. This was one of the earliest examples of musique concrète, which uses recorded sounds as base material and manipulates them using electronic techniques.

It was a moment of clarity for Radigue. “Of course it is music,” she said in 2019. “Anything can become music. It depends on the way we listen to it.”

Radigue contacted Schaeffer and eventually landed a job at the Studio d’Essai in Paris, which he had founded as a resistance center during World War II and which became a sort of experimental music institution after the conflict. There she cut and pasted magnetic tape used by Schaeffer and another composer, Pierre Henry. It was laborious work, the financial and artistic recognition was negligible and men dominated.

“That was the way everywhere at the time,” she says in the interview. “I didn’t pay attention to that. No time should be wasted on that. I just ignored it and found my way anyway.”

But, she added, “it was nice to explore the US in a different way.” Radigue first traveled to the United States in 1964, for an extended stay with her then-husband, Arman, a noted painter. (Their son is named after Arman’s best friend, the artist Yves Klein.) In the early 1970s, she returned to America, where she found herself with a bohemian audience.

“I got to know all the wealth of American artists from this period, both from the pop art scene and from musicians,” she said. “James Tenney was a good friend and introduced me to the musicians of this period” – including John Cage, Philip Glass, Steve Reich, David Tudor and Laurie Spiegel. She took in the epically long SoHo loft performance of the time.

It was in America that Radigue began experimenting with synthesizers, having left Schaeffer and Henry behind, who disapproved of the “non-concrete” path their assistant’s music took. Rather than manipulating recorded sounds, Radigue was more intrigued by electronic feedback — a precarious and time-consuming process to record, especially as she began to focus on mastering small changes. Radigue worked with several synthesizers, including the Moog and the Buchla 100, before opting for the ARP 2500, the modular device that would define her sound for the next 30 years.

Radigue even called her ARP: Jules. “What struck me the most was ‘his voice,'” she said in the interview. “It was so rich and expressive. Even if we didn’t agree…’

Jules had an appealing ease of use, with sliding matrix switches that enhanced the tactile sensitivity of her music, which she explored further when she returned to Paris after divorcing Arman in 1967. “Psi 847” and “Transamorem – Transmortem”, both of which are premiering in art galleries, have timbral shifts and intermittent rhythmic events that intensify already compelling atmospheres.

In the 1970s, she embraced Tibetan Buddhism and completely abandoned music for three years. When she returned to composing, the incorporation of Buddhist ideas—as in the “Songs of Milarepa” and the sprawling “Trilogy,” influenced by the Tibetan Book of the Dead—only doubled the simple, seamless construction of her work. ‘Kyema’, subtitled ‘Intermediate States’, is particularly suggestive; following the Book of the Dead’s journey of existential continuity, it avoids finality, meandering slowly and sustained by thumps, overtone-like spots and grainy white noise.

It wasn’t until Radigue was in her sixties that she began to gain recognition in France, and it was even later when she made a living from her music. In 2001 an unforeseen shift took place. For years, Radigue’s only employee had been her cat. She then reluctantly accepted her first acoustic assignment – ‘Elemental II’ for musician Kasper T. Toeplitz – and began to collaborate more regularly with artists, including for a release with the laptop quartet de Lappetites. Over the past 20 years, collaboration has resulted in new works; ten years ago a composition for solo harp, “Occam I”, started a huge cycle of “Occam” works.

The vast ‘Occam’ collection has brought forth a new philosophy in her work, derived from Occam’s razor, which states that ‘entities should not be unnecessarily multiplied’. That principle of frugality is a useful way of understanding how this defiantly slow recent music comes together: instead of the piece starting a process of distillation, it now starts with material that’s already incredibly distilled.

To the listener, the newer work is still made of the same building blocks her music has had for decades: slow-moving fundamentals, shimmering overtones, microtones, and long spans of material. The only real change is that a few people now share the process of conception and realization.

In the interview, she said that this late career bloom was fading. “It’s hard now,” she wrote. “I’m quite old, have some health problems, and I need to reduce my activities.”

But a delay in her production can’t detract from a career that embodies committed artistry: a composer who stumbled upon a sound and spent a lifetime nurturing it.