Forget naturalism. With movie acting this year, there are big swings. 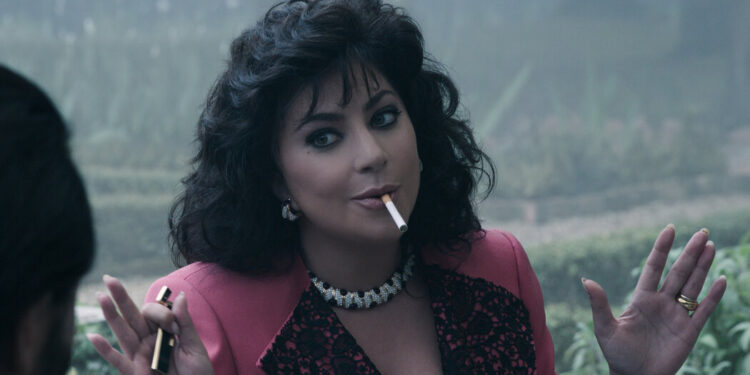 There is a great story Minnie Driver tells about director Joel Schumacher, who reacted dryly after an opponent complained that Driver’s performance in “The Phantom of the Opera” was too exaggerated.

“Oh dear,” Schumacher replied, “no one ever paid to look under the top.”

I’ve thought a lot during this film season about that bon mot, where so many stars seem to swing in front of the fences. Think Lady Gaga and Jared Leto, who grow so daringly big in “House of Gucci,” or Jessica Chastain and Andrew Garfield as televangelists in “The Eyes of Tammy Faye,” where they spread their appearances almost as wide as the mascara of Tammy Faye Bakker – laden eyes.

In “The Last Duel,” Ben Affleck has a blast playing his costume drama to the extreme, and the fact that he’s doing it all in a blonde wig and nu-metal goatee makes the role even more over the top. And then there’s Kristen Stewart, who eschews her signature minimalism for the horribly maximalist “Spencer,” where she’s asked to wiggle, scream, dance and heave, sometimes all within the same scene.

After the final Oscar season celebrated the quiet, naturalistic “Nomadland,” it’s a thrill to see so many of this year’s prestigious dramas take a different direction and embrace its sheer size. In an era dominated by superhero movies, smaller films may now need a performance that feels like an event. Or maybe, after a period when so many of us have lived limited lives, it’s invigorating to watch actors shake off their shackles and go broke.

Be that as it may, it works. “Tap, tap… Boom!” is animated by Garfield’s enthusiasm as the composer Jonathan Larson, a man who always works at 11. When I looked at him, I remembered the “30 Rock” joke where Jenna Maroney lobbied the Tonys to add a category for “theatrical living in normal life.” And this month brings a double dose of big Cate Blanchett appearances in “Don’t Look Up,” in which she becomes a terrifying “yassified” cable news host, and “Nightmare Alley,” in which she treats the dazzling film production design as if it were all custom. made for her femme fatale to sneak up on.

I am not suggesting that these outsized performances are a miscalculation. On the contrary, an actress like Blanchett is just as attuned to the tone of her movies as a singer who asks for the desired key and then starts belting. When a skilled performer is able to hit all those high notes, it’s more than just technically dazzling: it makes the softly played notes that come to resonate even more.

But hey, there’s nothing wrong with just being blinded for the sake of it. It’s fun when Bradley Cooper shows up in “Licorice Pizza” to terrorize the young protagonists with wild, nervous electricity: Just when it feels like the movie is coming to an end, Cooper adds enough shock to make “Licorice Pizza” for 30 more minutes. Part of the thrill of watching such a big performance is knowing how much ridicule is at stake if the actor fails to capture it. Just think of poor Ben Platt in the film adaptation of “Dear Evan Hansen”: his crying fits, so powerful on stage, unfortunately proved memorable in the movies.

And sometimes the most fascinating thing about a movie is the tension between an artist who gets big and co-stars who don’t. The first time I saw ‘The Power of the Dog’ I have to admit that I had no connection with Benedict Cumberbatch, whose performance as the sadistic rancher Phil Burbank felt way too broad. After all, his main scene partners are Kirsten Dunst and Jesse Plemons, a real-life couple who happen to be two of the best practitioners of American naturalism: they can do anything on screen and you won’t just believe it, you’ll even catch them doing it. Towards them I thought Cumberbatch was too mannered, like an actor determined to show his work.

But the second I watched the movie, I realized that all those tricks are perfect for Phil, who’s hiding more than just his silver spoon upbringing and Yale diploma. Put the pieces of his backstory together and you’ll realize Phil’s dirt-covered cowboy act is all shit, a performance of machismo so fraught that an intruder like Dunst threatens it because she doesn’t have to put on any act at all. It took Jane Campion, the film’s director, guts to put together that kind of cast and to trust that it would work, just as it took guts for Cumberbatch to push things just a little further than some actors would be comfortable with.

And hey, at least those above average performances will make for some good Oscar clips. Many of the stars who have gone broke have earned the attention of the awards, although I do want to do it for Affleck, who is delightful as the pompous count in “The Last Duel” and deserves serious consideration as a supporting actor. The Golden Globes instead nominated him for his low-key work on “The Tender Bar” — a mistake, given that the only thing Affleck has done this year that’s even comparable to “The Last Duel” is the contribution he’s made to the pop culture as a half of Bennifer 2.0.

Maybe that’s part of the fun of these super-sized performances: They’re finally scaling to the level of celebrity we’re counting on someone like Affleck or Gaga for. Hollywood has so often asked the stars who live the greatest life to shrink themselves for critical acclaim. But where’s the fun in that? They didn’t make that screen big for nothing.