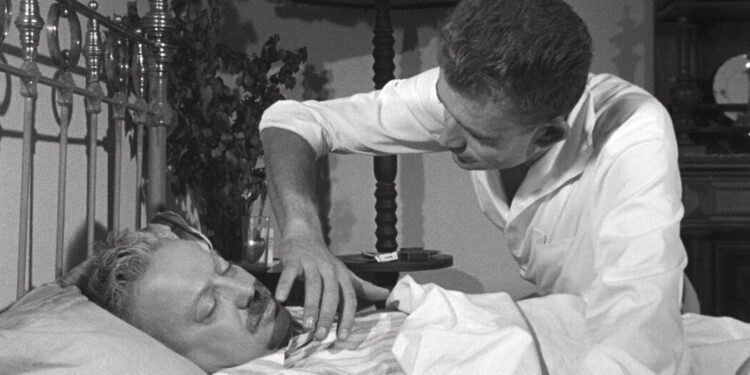 Shot in Algeria on the eve of independence, “The Olive Trees of Justice” is the only fiction film by American documentary filmmaker James Blue and, based on a novel by French Algerian writer Jean Pélégri, one that explores both colonial oppression and post- colonial displacement.

Blue’s film, which premiered in the United States in 1963 as part of the first New York Film Festival, has been revived at Metrograph, recently restored and still resonating today.

Unsurprisingly, “Olive Trees” has a strong neo-realistic component. A pre-credit statement announces it as a movie with no professional actors. The protagonist Jean (Pierre Prothon) is a young pied-noir – a settler of European descent – who has returned from France to Algiers to be with his dying father (played by Pélégri, who also wrote the screenplay). Some of the strongest scenes follow him through the barricaded city streets, hilltop slums and bustling markets. At a time that feels more stolen than staged, French soldiers stop traffic to check an abandoned shopping bag for explosives. Apparently the production itself was targeted by right-wing settlers.

The film also has an existentialist aspect. Like the antihero of Camus’ “The Stranger,” also set in Algiers, Jean experiences the death of a parent and considers himself a foreigner in his native country. Prothon has the haunted emptiness of a Robert Bresson director. (Not coincidentally, Pélégri had just played the police detective in Bresson’s ‘Pickpocket’.) Maurice Jarre’s solemn, modernist score adds to the underlying terror, as do the helicopters hovering over the city, which comes to a halt halfway through the film for Ashura, an Islamic day of mourning.

Jean’s return is a journey into his past, depicted in extended flashbacks. His dying father, a self-made man, has nostalgia for his lost vineyard (taken by creditors) as for a world “where everyone knew their place”. Jean’s memories are now tainted by a relative’s desire to hold onto her farm by any means necessary and the news that his childhood best friend has joined the National Liberation Army in the mountains.

The pervasive sense of impending conflict provoked an unusually personal response from DailyExpertNews critic Howard Thompson. Self-identified as a “movie-goer from Dixie who has never set foot in North Africa,” Thompson wrote that the portrait of French settlers forced to enclose their vineyards with barbed wire, “suggested there were trouble clouds over a calm but firmly run plantation of yore advancing. Despite this nostalgic characterization of slavery, Thompson praised the film’s balance. And indeed, Blue is a sympathetic witness to a zero-sum conflict.

After winning an award at Cannes in May 1962, “Olive Trees” opened in Paris in June, eight months after hundreds of Algerians were massacred in the city while French revanchists were still planting bombs. The war had come home. Some thought the film’s measured gravity was palliative. The Times correspondent Cynthia Grenier reported praise from critics across the political spectrum who “seemed to have only one regret: that no Frenchman had the courage to make such a film” – perhaps for good reason. The film absolutely failed to attract a French audience.

“Olive Trees” is steeped in ambivalence—a dilemma manifested in the abrupt, impulsive decision Jean makes in the film’s closing moments.

The Olive Trees of Righteousness

Friday-Sunday, in person and streaming on Metrograph, Manhattan; metrograph.com.