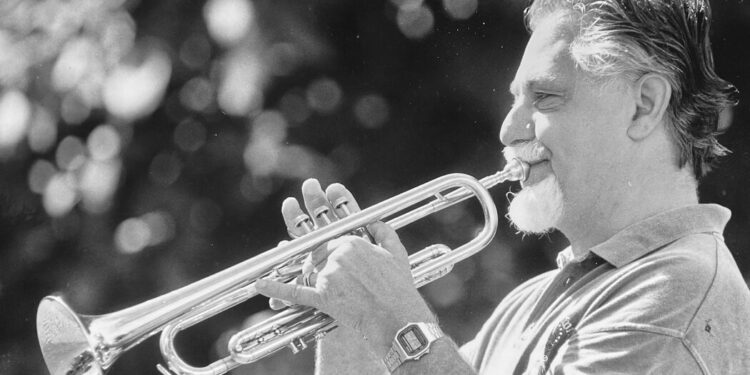 Franz Streitwieser, a German-born trumpeter who amassed a collection of brass instruments spanning centuries of music history and drawing musicians from all over the world to his home in a converted barn in Pennsylvania, died Nov. 8 at a hospice in Sebring, Florida. He was 82.

The cause was Alzheimer’s disease, his son Bernhard said.

While a performer by trade—on one of the most extroverted orchestral instruments, no less—Mr. Streitwieser the soul of an archivist.

He took a 19th-century yellow-and-white barn in rural Pennsylvania and turned it into a museum to house one of the world’s largest collections of brass instruments and to also serve as a concert space. The Streitwieser Foundation Trumpet Museum, in Pottstown, opened in 1980 and housed approximately 1,000 items until 1995, when it found a new home in Europe.

In addition to the standard brass fare, including valved trumpets, horns, and trombones, the museum displayed a variety of curiosities: over-the-shoulder trumpets used in the Civil War, replicas of Bronze Age Viking trumpets, horns carved from tusks of elephants. Visitors would have come across a life-size cardboard cutout by composer John Philip Sousa and a 40-foot (12-meter) horn carved from pine wood, made for Swiss shepherds.

Mr Streitwieser located the museum in Pottstown because he and his wife, Katherine, had moved there to be closer to her relatives. She was a descendant of the DuPont family, a well-known chemical company, which helped support the museum.

Set on a 17-acre site called Fairway Farm (it also had a bed-and-breakfast), the museum attracted buyers enthusiasts from far and wide. Music historian Herbert Heyde, who later managed the Metropolitan Museum of Art’s collection of instruments, spent six months cataloging the contents of the Pottstown Museum in the 1990s.

But Pottstown, about 40 miles from Philadelphia and closer to the state’s rural center in culture, lacked strong funding for arts programs and the museum visit lagged behind. After the death of Mrs. Streitwieser in 1993, Mr. Streitwieser was unable to keep the museum running and had to find a new home for his treasure. Local universities showed interest, but none had the space.

It came to the rescue of Austria. Kremsegg Castle, near Linz, was in the process of setting up a government-funded musical instrument museum, and officials there knew Mr Streitwieser as a distinguished collector. They offered to take over his property – and him, too, as an adviser. The collection was packed and shipped in 1995.

Franz Xaver Streitwieser was born on September 16, 1939 in Laufen, Germany, a Bavarian town just across the border from Austria. He was one of five children born to Simon and Cecilia (Auer) Streitwieser, who were farmers.

As a boy, Franz visited a music store with his mother one day and was attracted to a shiny brass trumpet. But it was priceless, so the shopkeeper pointed out a tarnished, cheaper trumpet in the back of the shop. He bought it, and after a teacher of his gave him a can of polish, it glowed. It was the first of many instruments in his life.

Franz soon joined the city band and attended the Mozarteum University of Salzburg in Austria, graduating in 1961 with a degree in trumpet performance.

In college, he met Katherine Schutt, an oboe and piano student from Wilmington, Del. Their courtship took place during the filming of “The Sound of Music” in and around Salzburg, and the couple became extras in several scenes.

Mr. Streitwieser and Mrs. Schutt were married in 1963. They lived primarily in Freiburg, Germany, where Mr. Streitwieser was principal of the Freiburg Philharmonic from 1965 to 1972. He traveled frequently to the United States and spent a year in New York City studying at Juliard. The couple had five children, one of whom, Heinrich, died at a young age.

In 1977, Mr Streitwieser collaborated with German instrument maker Hans Gillhaus to design a modern version of the corno da caccia, a round horn popular in the 18th century; they called it a clarinet.

The family moved to Pottstown in 1978. Mr. Streitwieser played in local orchestras and received a master’s degree in music from the University of South Dakota in 1980. With Ralph T. Dudgeon he wrote “The Flügelhorn” (2004), a history of that member of the trumpet family.

After the death of his first wife, Mr Streitwieser married Katharine Bright in 1994 and soon moved with her to Austria in the company of his copper collection. The couple spent half a year in an apartment in the 13th-century Kremsegg Castle, at home between their horns. The rest of the time they lived in Florida and moved for good to Lake Wales, in the central part of the state, in 2004. Mr. Streitwieser founded a brass quintet and continued to perform at local festivals.

The Streitwieser collection remained in Kremsegg until the musical instruments museum closed in 2018. Much of its contents were moved to the Linz Castle and Museum or other museums in Upper Austria.

In addition to his son Bernhard, Mr. Streitwieser leaves his wife; his sons Erik and Charles; his daughter, Christiane Bunn; his stepdaughter, Henrietta Trachsel; a sister, Anna Breitkreutz Neumann; and 13 grandchildren.

dr. Dudgeon, who also played music with Mr. Streitwieser and helped catalog the brass instruments, said he first heard of him in the 1970s. He had come to pick up a purchase from a Massachusetts music store and found that the store had very few brass instruments left.

He knew he had to meet Mr. Streitwieser, he said, when the shopkeeper told him that “a Bavarian chap came in and bought them all.”