How London Almost Got Its Own Eiffel Tower 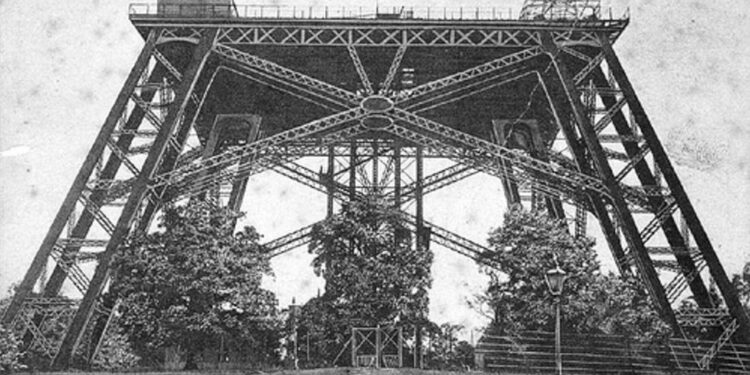 (DailyExpertNews) — Somewhere beneath the pitch of the English National Stadium in Wembley, London, lie the foundations of what could have been the city’s tallest building. Inspired by the Eiffel Tower in Paris, the Great Tower of London was poised to surpass it in height, reaching nearly 1,200 feet.

Instead, it never got past the first phase of construction, which came to be known as the ‘London Stump’. It was demolished nearly 120 years ago, leaving behind an unfulfilled dream and large concrete foundations that were rediscovered in 2002, when the current stadium was built to replace an older stadium.

So what went wrong?

The tower was the brainchild of Edward Watkin, a British politician and railway magnate whose previous efforts included a failed attempt to build a tunnel under the English Channel more than 100 years before the current Eurotunnel began construction.

‘The bigger the better’

One of the tower designs that were not chosen.

“Watkin was a born entrepreneur and he loved big ideas – the bigger the better,” said Christopher Costelloe, an expert on Victorian architecture and a surveyor of historic buildings with the public heritage organization Historic England. “I think he tended to get so excited about his ideas that he would often plow through before considering how practical or financially viable they were.”

Opened in 1889, the Eiffel Tower quickly became a popular tourist attraction, and the construction costs paid for itself within a few months.

At the same time, Watkin was looking for ways to attract more passengers to his Metropolitan Railway, which would later become the Metropolitan line of the London Underground.

The railway passed through Wembley, then a rural hamlet northwest of central London, where Watkin had bought land to create a theme park: “It was intended to be the Disneyland of its time, or the successor to early 19th-century leisure parks.” like Battersea Park in London or Tivoli Gardens in Copenhagen,” says Costelloe.

What could be better than a tower higher than the Eiffel to convince Londoners to get on a train to get there?

Watkin had the audacity to ask Gustave Eiffel to design it himself, but the French engineer refused on patriotic grounds. His plan B was an international design competition, with a first prize of 500 guineas, about $80,000 in today’s money.

He received 68 entries, not all of them realistic.

One was 2,000 feet long and was intended to run a train halfway to the top, on a spiral track. Another was designed as an “air colony” with sky gardens, museums and galleries, as well as a reproduction of the Great Pyramid at the top.

Most, however, matched the Eiffel aesthetic, and it was one of these that Watkin picked as the winner, submitted by London architects Stewart, McLaren and Dunn.

“The winning proposal was a slimmer version of the Eiffel Tower. The overall profile is very similar, but the structure was a little leaner,” Costelloe says. At 1,200 feet, it was also about 175 feet taller than its Parisian counterpart, which was the world’s tallest building at the time.

A not so popular attraction

The first and only completed phase of the tower.

All entries were collected in a catalog, published in 1890, which described the project in detail and revealed that the London Tower would be “much more spacious” than the Eiffel and would have “restaurants, theatres, shops, Turkish baths, promenades, winter gardens”. contain. and a variety of other amusements,” all accessible via a recent invention, the electric elevator. An observation deck would provide panoramic views and astronomical observations, made possible by the “purity of air” found at such an “immense height.”

However, after initial fanfare, the proposed design was scaled down to make it cheaper to build, and the legs were reduced from the original eight to four, the same number as the Eiffel.

Wembley Park had opened the year before and had moderate success, but the tower still had a long way to go — and there was something wrong with it.

“Once they reached the first stage, it quickly became apparent that the building was sagging. Not so much that they couldn’t use it, but they certainly realized they would be in big trouble if they built it higher, increasing the pressure was on the legs,” says Costelloe.

Although it was opened to the public and elevators were installed, the tower was doomed to fail.

“One of the biggest problems was that Watkin died in 1901,” Costelloe adds. “He had been the driving force behind the project and with his death only a rational calculation of costs and benefits was left. People could go to the first phase, but it wasn’t high enough to get the kind of panoramic views you would get from the top of the Eiffel Tower, and the area was not particularly developed or spectacular.

“There just weren’t enough visitors to pay for the finish.”

Once Watkin died, the impulse to build the tower was lost.

A year after Watkin’s death, the tower was declared unsafe and closed. Shortly after, it was demolished with dynamite. However, the surrounding Wembley area continued to thrive as an industrial and residential suburb of London.

A stadium was built on the former site of the tower in 1923, later to be known as the original Wembley Stadium. Its demolition to make way for the current Wembley Stadium eventually exposed the tower’s foundations as work began on lowering the level of the new pitch. It was a belated reminder of the failed tower, also referenced by an area pub called “Watkin’s Folly” (it closed permanently in 2019).

Remarkably, Watkin’s Tower would still be London’s tallest building today, surpassing The Shard skyscraper by nearly 60 feet. But would it be an iconic landmark like the Eiffel Tower? Probably not, Costelloe says: “It would still have been a very large structure on the skyline, but only seen in certain views,” he says.

“Because it wasn’t in central London, it would never have had the kind of dominating focus that the Eiffel Tower has in Paris.”