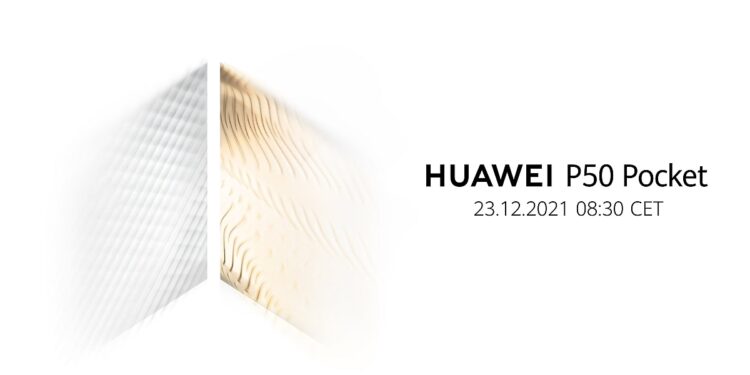 The foldable smartphone Huawei P50 Pocket will be launched on December 23, the company confirmed on Tuesday. Huawei’s upcoming handset could come in two colors based on the teaser the company shared today. While Huawei hasn’t released any official details yet, including the specs of the smartphone, the teaser suggests it could come with a known vertical folding design. According to previous reports, the company has been working on a smartphone that could be called the Huawei Mate V.

The company tweeted out the teaser earlier today, which features an image of two gold and silver panels slanted next to the text “Huawei P50 Pocket” with the launch date of December 23. The upcoming foldable smartphone is expected to launch at 8:30 a.m. CET (1:00 p.m. IST), according to the image shared by Huawei.

While there are currently few details on the specs of the smartphone, the smartphone was tipped to launch with the Kirin 9000 SoC in China dubbed the Huawei Mate V, suggesting it could be a 4G smartphone. The global variant could carry the Snapdragon 888 SoC under the hood, according to a report from XDA Developers. The device would also have a 6.7-inch screen and could have the vertical folding design of the Samsung Galaxy Z Flip 3.

However, Huawei P50 Pocket is not the only smartphone expected to be launched by the company in the near future. According to an older report, the company also plans to launch Huawei Watch D, the company’s first wearable to support blood pressure monitoring, on December 23. The smartwatch could have a square design with dedicated buttons, including home and health, and could come with support for electrocardiogram measurement. However, the company has not yet revealed any details about the smartwatch, including price and specifications.

Are the Galaxy Z Fold 3 and Z Flip 3 still made for enthusiasts – or are they good enough for everyone? We covered this on Orbital, the Gadgets 360 podcast. Orbital is available on Apple Podcasts, Google Podcasts, Spotify, Amazon Music and wherever you get your podcasts from.

As a technology writer with Gadgets 360, David Delima is interested in open source technology, cybersecurity, consumer privacy, and enjoys reading and writing about how the Internet works. You can contact David by email at [email protected], as well as on Twitter at @DxDavey. Lake