Huge underwater volcanic eruption in Tonga felt around the world 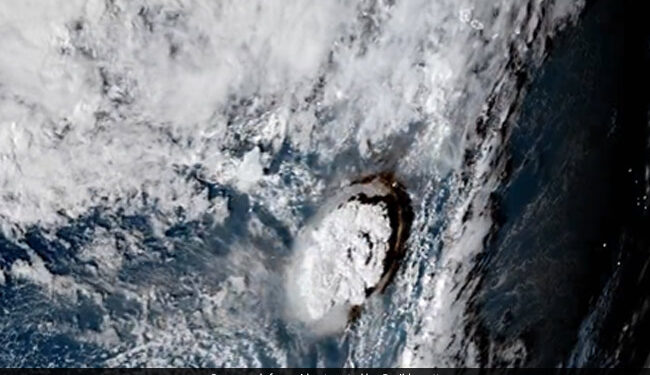 Hunga-Tonga-Hunga-Ha’apai, located about 40 miles north of Nuku’alofa, has a history of volatility.

The massive underwater volcanic eruption in Tonga was so powerful that it was recorded around the world, triggering a tsunami that swept the Pacific coasts from Japan to the United States, scientists said Sunday.

Dramatic satellite images showed the long, rumbling eruption of the Hunga Tonga-Hunga Ha’apai volcano spewing smoke and ash into the sky, with a thunderous roar heard 10,000 miles away in Alaska.

The US Geological Survey recorded Saturday’s eruption as the equivalent of an earthquake measuring 5.8 on the Richter scale.

But the full extent of damage in Tonga was unclear on Sunday with lines of communication down.

A 1.2-meter wave slammed into the Tongan capital Nuku’alofa, with locals reporting that they had fled to higher elevations, leaving behind flooded homes, some with structural damage, and small rocks and ash. that fell from the sky.

New Zealand scientist Marco Brenna, a senior lecturer at Otago University’s School of Geology, described the eruption’s impact as “relatively mild,” but said another eruption with a much greater impact cannot be ruled out.

Waves of about 1.2 meters hit Japan’s Pacific coast with the Japan Meteorological Agency warning that waves as high as three meters were possible.

In New Zealand, more than 2,300 kilometers from Tonga, 120 people were evacuated from northern coastal areas and several boats were destroyed when a huge wave crashed into a marina.

Australia’s popular Bondi beach in Sydney was temporarily evacuated as a precaution, while in California coastal streets in Santa Cruz were inundated and closed to traffic.

The National Weather Service Alaska reported that the Alaska Volcano Observatory had recorded the eruption in Anchorage and Fairbanks “6000 miles from the volcano.”

The Fife weather station in Scotland tweeted that it was “just incredible to think of the force that can send a shock wave across the world” after the eruptions caused a jump in the barometric pressure graph.

Hunga-Tonga-Hunga-Ha’apai, located about 40 miles north of Nuku’alofa, has a history of volatility.

In recent years, sea level broke in a 2009 eruption while in 2015 it spewed so much large rocks and ash into the air that when they settled, a new island had formed two kilometers long, one kilometer wide and 100 meters high.