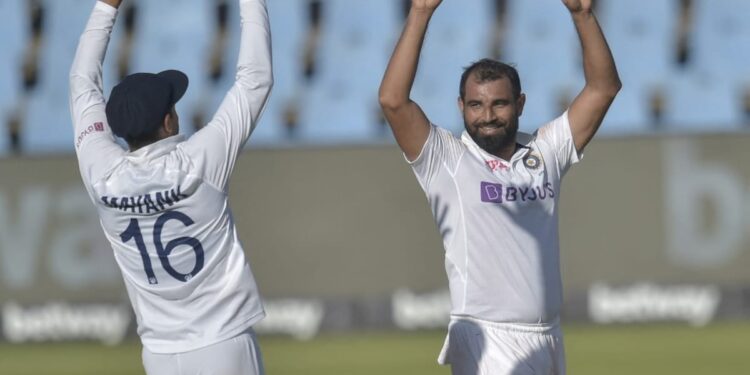 Mohammed Shami was the destroyer-in-chief as he took a 5 wicket haul at Centurion on Day 3 to take India to a 130-point lead in the first Test match against South Africa. Shami completed his fifer by taking the wicket from Kagiso Rabada and that turned out to be his 200th Test wicket as well. Shami achieved the feat in his 55th test race, making him the landmark’s third fastest Indian pacemaker. Kapil Dev (50 tests) and Javagal Srinath (54 tests) are the only other Indian pacers to reach the milestone in fewer tests than Shami.

The medium pacer looked good early in the South African innings when he first sent Keegan Petersen back and then bowled a peach of a delivery to clean Aiden Markram’s bowl immediately after the lunch break on Day 3.

With the South African mid- and lower-middle class showing stiff resistance, Shami was brought back on the attack and he responded by sending Wiaan Mulder back and then taking the crucial wicket of South Africa’s top scorer Temba Bavuma.

Rabada played a good hand and looked set to take South Africa past the 200 point mark before Shami attacked again and knocked out the opponent’s pacemaker.

Shami’s efforts have given India a good platform as they seek to consolidate their position.

It should be noted that Shami has the best average and best hitting percentage of all Indian pacers who have played 50 or more Test matches.