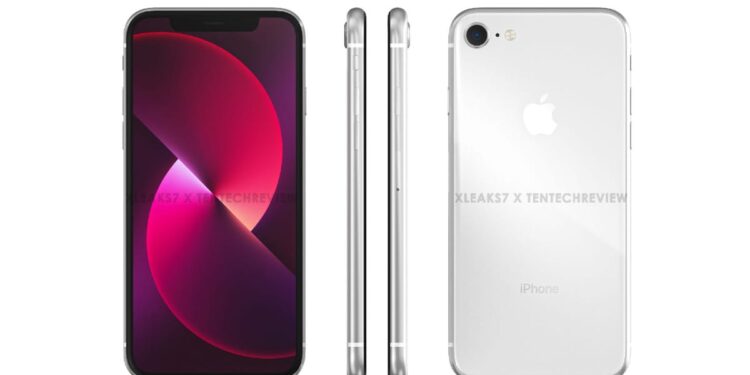 iPhone SE 3 computer-aided design (CAD) renders have surfaced online, giving Apple enthusiasts a glimpse of the upcoming phone’s design. The design of iPhone SE 3 shown in the renders is very similar to the design of its predecessors iPhone SE (2020) and iPhone XR. The handset can be seen with a notch for Face ID on the front. On the back, the smartphone can be seen with a single camera and LED flash along with the Apple logo. The upcoming iPhone SE 3 is expected to be powered by the company’s A15 Bionic SoC. However, Apple has not yet announced anything about iPhone SE 3.

The iPhone SE 3 CAD renders were shared by TenTechReview in collaboration with noted tipster David Kowalski (@xleaks7). As mentioned, the leaked renders show a look similar to that of the iPhone SE 2020. The render shows iPhone SE 3 in the color White. The handset is seen with a touch ID button. According to the leak, the front design of the iPhone SE 3 is identical to the iPhone XR with a notch and symmetrical edges.

The renders show a power button and a SIM tray on the right. Volume rockers and alert slider are arranged on the left back. Furthermore, the charging port and speaker grilles can be seen on the bottom of the handset. According to the leak, the iPhone SE 3 will measure 138.4 x 67.3 x 7.3mm. It is said to be 8.2mm thick with a camera bump. According to the report, the screen measures 131.3 x 60.2 mm. The handset could then have a 5.69-inch display. As mentioned, a single rear camera and LED flash can be seen on the back, along with the Apple logo.

Since there is no confirmation from Apple about the iPhone SE 3 yet, this information should be taken with a grain of salt.

In recent weeks, iPhone SE 3 has been tipped several times. According to previous leaks, the new model will be equipped with Apple’s A15 Bionic chip. The Apple iPhone SE 3 would also include the Qualcomm Snapdragon X60 5G modem chip. iPhone SE 3 is expected to launch in the first quarter of this year.

ADVERTISEMENT
This week on Orbital we discuss the Gadgets 360 podcast, iPhone 13, new iPad and iPad mini and Apple Watch Series 7 – and what they mean for the Indian market. Orbital is available on Apple Podcasts, Google Podcasts, Spotify, Amazon Music and wherever you get your podcasts from.