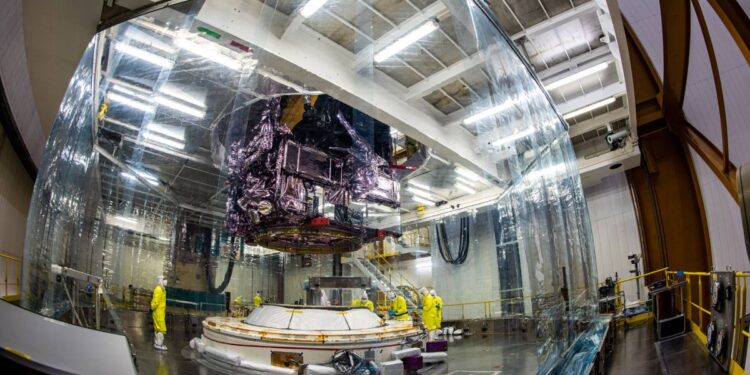 The James Webb Space Telescope, the largest ever space telescope and the most remarkable after Hubble, has been placed atop the Ariane 5, the rocket that will launch it into space from the European spaceport in French Guiana. The James Webb Space Telescope is designed to answer outstanding questions about the universe and other groundbreaking discoveries in astronomy. It will launch on December 24, but no sooner than that, according to NASA.

On Thursday, December 16, the European Space Agency (ESA) posted to Instagram a series of photos showing the James Webb telescope being placed on top of the Ariane 5 rocket. Once the telescope was brought into the final assembly building, it was slowly lifted about 40 meters before being maneuvered on top of the rocket. The technicians then bolted the telescope’s launch vehicle adapter to the rocket.

The ESA said the entire process was conducted according to all safety and cleanliness regulations, adding that it was one of the most delicate operations in terms of launching the James Webb Space Telescope.

“A ‘shower curtain’ about 12 meters high and 8 meters in diameter was installed between two platforms to create an enclosed space around Webb to prevent contamination,” the space agency explains.

The next step now involves encasing the telescope in the specially modified fairing of the Ariane 5. The telescope will launch no earlier than December 24, so that teams can work on a communication problem between the observatory and the launch vehicle system.

The James Webb Space Telescope, an international collaboration between NASA, ESA and the Canadian Space Agency (CSA), is not only the largest, but also the most powerful telescope ever launched into space. The ESA will provide the telescope launch service as part of the international agreement.

Together with its partners, the ESA was tasked with developing and preparing Ariane 5 modifications for the mission. In addition, the space agency was also responsible for the procurement of the launch service by Arianespace.