Ken Kragen, a force behind ‘We Are the World’, dies aged 85 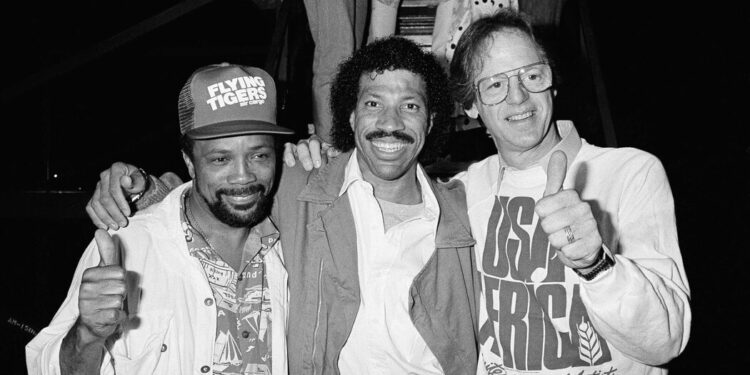 Entertainer and humanitarian Harry Belafonte was so inspired by “Do They Know It’s Christmas?”, the record released in late 1984 by an all-star lineup of British and Irish musicians to raise money for the famine in Africa, that he wanted to do something similar with American musicians. But Mr. Belafonte, then in his late fifties, knew he had to recruit today’s stars to carry out the idea.

“I needed a younger generation of artists,” he wrote in his memoir, “My Song” (2011), “the ones who are now at the top of the charts: Michael Jackson, Lionel Richie, Kenny Rogers, and Cyndi Lauper. When I got to management of most of these artists, I kept seeing the same name: Ken Kragen.”

After some persuasion, Mr. Kragen latched onto Mr. Belafonte’s vision and became a crucial behind-the-scenes force in the creation of “We Are the World,” the collaboration song recorded by a dizzying array of stars (including Mr. Belafonte) and released in March 1985. The song became a worldwide hit and, along with an album of the same name, raised millions of dollars for hunger relief in Africa and elsewhere.

“When Belafonte called me, the first call I made was with Kenny Rogers,” Kragen recalled in a 1994 interview with Larry King on DailyExpertNews, one of his clients. “Then I called Lionel Richie. Then I called Quincy Jones. Lionel called Stevie Wonder. Within 24 hours we had six or seven of the biggest names in the industry.”

Mr. Kragen, who has organized or helped organize other formidable fundraising projects, including Hands Across America in 1986, died Tuesday at his Los Angeles home. He was 85.

His daughter, Emma Kragen, confirmed the death. No cause was given.

As Mr. Kragen often told the story later, his goal in the “We Are the World” project was initially to recruit two new stars a day. But soon recruiting was not his problem.

“Lionel Richie had this phrase – he says, ‘You are who you hug,’” he told Mr. King, “and the point is, everyone wanted to hug someone who was hipper or someone who was more successful. So the day I Bruce Springsteen, the floodgates opened, because he was the most popular artist in America.”

At that point, Mr. Kragen went from calling to answering – a lot.

Mr. Kragen was the founder and president of USA for Africa, the foundation established to manage the relief money raised by “We Are the World” which continues to this day. According to its website, it has raised more than $100 million to alleviate poverty.

Kenneth Allan Kragen was born on November 24, 1936, in Berkeley, California. His father, Adrian, was a lawyer who later taught law at the University of California, Berkeley, and his mother, Billie, was a violinist.

While studying engineering at Berkeley, Mr. Kragen began hitting local nightclubs and soon became friends with the Kingston Trio, a young group that often played at the Purple Onion in San Francisco. He started booking the group into colleges and when he graduated in 1958, he was asked to lead them; instead, he attended Harvard’s graduate school of business. Before he started there, he took a trip to Europe with his parents; when he got home, a new group was getting a lot of buzz nationally: the Kingston Trio.

“I just wanted to die,” Mr. Kragen told DailyExpertNews in 1986. “I thought I had lost the opportunity of my life.”

But when he graduated in 1960, he found new opportunities as a talent manager and promoter. He led the folk group the Limeliters and recorded the Smothers Brothers in 1964. He and his then business partner, Kenneth Fritz, were executive producers of “The Smothers Brothers Comedy Hour,” which was one of the most talked-about shows on television for three seasons, from 1967 to 1969, due to its battles with censors.

In 1975 he joined Jerry Weintraub, a talent manager with a formidable roster, including John Denver, Led Zeppelin and the Moody Blues. (Mr. Weintraub would soon become a well-known film and television producer.) In 1979, Mr. Kragen started his own company. His clients included the Bee Gees, Olivia Newton-John and Trisha Yearwood.

mr. Kragen produced television movies with Mr. Rogers, as well as TV specials for singer Linda Eder and others. His fundraising efforts include Hands Across America, whose goal was to create a chain of people holding hands that stretched from coast to coast. The event took place in May 1986. The coast-to-coast chain didn’t quite pan out — there were holes in several places — and although the event raised millions of dollars for hunger and homelessness, it stuck with its $50 million goal. But some five million people took part, including President Ronald Reagan.

Mr Kragen married actress Cathy Worthington in 1978. In addition to her and his daughter, he leaves behind a sister, Robin Merritt.

In 2019, Buzzfeed asked Mr. Kragen if he could envision a revival of Hands Across America. He couldn’t. People, he said, would be too busy documenting their participation with selfies to hold hands.